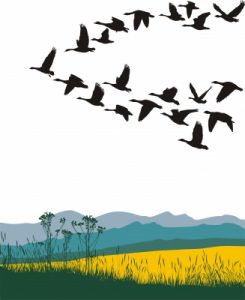 Image courtesy of Vlado at FreeDigitalPhotos.net

Days grow shorter. The small ruby-throated hummingbird that visited our feeder for sugar-water several times a day through August has decamped, beginning the first leg of his journey down to Mexico.

Overhead the Canada geese flock in great ‘V’s, calling out to each other as they wing south. The sugar maple at the bottom of the yard, stressed by an overburden of years of soil washed down from the hillside above, has already begun to turn. Its leaves are a beautiful orange, bright against the green of the trees beyond.

In the dark of the evening, the constellation Cygnus the swan flies overhead, having made its way slowly westward from its position lower in the east in June and July.

There is a clarity to the passage of time out in the country that is lost to the city, where ranks of buildings keep out the weather, streetlights blind the night sky, and snow is swept away in hours by machine.

Death as well is clearer out past the subways and freeways. A hawk swoops down in midday and catches a bluejay in mid-flight. It sits atop the bird, mantling it from the view of others who might want to steal a meal, while it moves its claws to finish the job.

A deer lies by the side of the road for days, its guts spilled beside the waving grass.

Modernity can almost be defined by the regulation of time and the sanitization, even the disappearance, of death. In the main this is a good thing: we prefer to live long, without thought of what comes after. Death is for us lucky ones something that happens far away, in the managed environment of a hospital rather than out on a messy field, public square, or homebound sickbed. Perhaps, we may come to feel, death happens nowhere, or not at all.

But we do not have exclusive rights to such blindness, the ancients suffered from it as well. And the wise among them counseled practices to combat it. A recent article by Bryant Rousseau in the New York Times on the “intensity” of meditation rituals in Thailand reminds us of the ancient Buddhist practices known as charnel ground contemplations. These practices are, in fact, key parts of mindfulness practice as outlined in the Satipaṭṭhāna Sutta (MN 10.14-30), central to mindfulness of the body. As Rousseau says,

The practice of corpse meditation, largely limited to Thailand today, is an ancient concept in Buddhism, sanctioned by the Buddha himself. There are centuries-old murals and manuscripts depicting scenes of meditation next to different types of cadavers, some infested with worms, others cut in two or being picked at by crows.

The unpleasant sight and overpowering stench of flesh decaying in tropical heat can impart lessons about important Buddhist precepts, like nonattachment to one’s body and the impermanence of everything, said Justin McDaniel, a professor of religious studies at the University of Pennsylvania.

The ritual is viewed as a powerful way to learn selflessness, Professor McDaniel said, “and the more selfless you are, the closer you are to nirvana.”

I wonder why such practices are not included in what we in the West consider mindfulness meditation. It is certainly not because such practices are incompatible with a secular outlook. While other practices in the article may be set to one side, death and decay are as much a part of secularism as they are of religion.

Perhaps indeed charnel ground contemplations are more compatible with secularism. It is, after all, in the supernatural aspects of religious belief that we find myths of escape from death, either through entrance into an everlasting heaven, or through rebirth. A secular outlook does not embrace such escapism.

So then why such aversion? Is it because in secularism, death is so final that it scares us, and in our fright we prefer not to contemplate it directly? Or is it simply a matter of disgust with the smelly and unfamiliar?

The countryside is redolent with the aroma of manure in spring and summer. An animal’s death is often first known by the smell, before the vultures descend upon it and clean its bones.

But death does happen in cities too, sometimes violently, other times known only by its stench. Perhaps those from the city may be no more aversive to learning about death than those who live closer to earth in the countryside. The Buddha recommended charnel ground practices in a world barely out of prehistory, to a public as close to the earth as any today. He must have felt they needed it. He must have felt that the awareness of death we get in daily life, even in daily life on the farm, was not sufficient to truly understand it.

There are practical difficulties with getting access to dead bodies. Thanks to modern notions of sanitation, there are no charnel grounds to visit. But even so we may undertake the contemplations. Neither are they so foreign to the West, where the skull on the shelf was a commonplace in paintings of the great masters. And in the theater: Alas, poor Yorick!

But a skull is already sanitized; clichéd enough that we barely register its past.

So let us reconsider certain of the “Intense” practices of Thailand, of original mindfulness, and see if there is a way to include them in our modern practice. We all could use them, particularly those of us buffered from the cycle of life in the city.

The Pāli word for mindfulness is “sati“, which connotes “memory” or remembering. To be mindful is not simply a matter of awareness; it is also a matter of remembering wise lessons learned through experience. The more intimately we can make ourselves aware of our mortality, the wiser will be our approach to the life we have left.