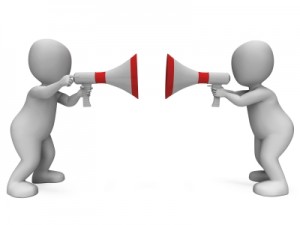 A White House staff member was recently fired for “a series of inappropriate and mean-spirited comments” in his Twitter feed, including snarky criticisms of several of his colleagues and superiors.

Somehow the news is all too ordinary. It’s hard to venture anywhere on the internet without encountering nastiness. Discussions devolve into arguments, arguments into feuds, flame wars, and one-upmanship. One finds the same pattern in Twitter feeds, forums, blog and Facebook comment threads, and it seems wherever two people can find one another to start up a conversation. Buddhism and its secular variety are not immune. Sometimes it seems like we are fragmented into saṇghas of one, wandering alone like rhinoceri.

They are hard to please,
some of those gone forth,
as well as those living the household life.
Shedding concern
for these offspring of others,
wander alone
like a rhinoceros.

Online ideas proliferate in scope and complexity. While we aim towards the diminution of suffering, much of what we spend our time on is more theoretical and ego-driven than palliative or insightful.

In the Madhupiṇḍika Sutta (The Honeyball, Majjhima Nikāya 18), the Buddha is confronted by Daṇḍapāni the Sakyan who, it seems, wants to pick a fight with him.

What does the recluse assert, what does he proclaim? (3)

But instead of taking him up on the argument, the Buddha pivots.

Friend, I assert and proclaim [my teaching] in such a way that one does not quarrel with anyone in the world with its gods, its Māras, and its Brahmās, in this generation with its recluses and brahmins, its princes and people; in such a way that perceptions no longer underlie that brahmin who abides detached from sensual pleasures, without perplexity, shorn of worry, free from craving for any kind of being. (4)

Confused and frustrated, Daṇḍapāni shakes his head and departs. The rest of the sutta is concerned with explicating the meaning of the Buddha’s cryptic utterance.

How does one teach without quarreling? In fact, in many places in the Canon the Buddha argues and debates with those who disagree with him, and is quite willing to scold recalcitrant monks for wrong beliefs or misbehavior. The point he is making isn’t that argument and debate has no place, but rather that it should not be an end in itself. If the debate has no clear aim towards resolution, it’s best to avoid. We must assume that the Buddha saw from Daṇḍapāni’s behavior that he was more a troll than an honest, even if deluded, inquirer.

The Buddha outlines a process to end quarreling, by ending clinging and delight in aspects of “mental proliferation”, or in the Pāli, “papañca”: obsessive, self-directed thinking that troubles so many of us.

As the sutta continues, Mahā Kaccāna further unpacks the Buddha’s analysis. Dependent upon the senses and their objects, consciousness and feelings arise. From those arise perceptions. Perceptions promote thinking, which is not in itself problematic. But when thinking becomes colored by concepts of “I”, “mine”, or “myself”, when it involves craving, conceit, and ignorance, then it shades into proliferation.

So for example, reading an online post or essay may promote in us certain feelings and mental perceptions. Those promote a certain kind of thinking: “Well, he must not have read this passage. If he had read it, he would see that he is wrong and I am right.” Or, “Well, she spends all her time reading those bad books, rather than going on retreat and reading these books which I know are better.” Or, “Well, he has spent so much time meditating that he has forgotten basic dhamma, which I know well.” And so on. We may even decide to upload our observations into comment threads or blog posts like this one, all the while obsessing about how our post might reflect well or poorly upon us. Once started, such thoughts seem to churn on endlessly.

What we see here is craving for recognition and fame, is conceit, is ignorance: papañca. As the Buddha said in the Alagaddūpama Sutta (MN 22):

Of course, this goes just as well if the others in question aren’t abusing or revering us in particular, but only certain “perceptions and notions [born of] mental proliferation” that we hold dear, or that we wholly reject.

It is only by abandoning deluded, egoistic viewpoints that one can extricate oneself from mental proliferation and the obsessive pain that it involves.

In the end these all just stem from perceptions that cause feelings that either please or displease us. When we are pleased, we cling to the pleasure as our own, and fight for it to continue. When we are displeased, we push it away with “quarrels, brawls, disputes, recrimination, malicious words, and false speech”.

To what extent do we construct theories of the dhamma out of restlessness, boredom, or to boost our own ego? Whether they take the form of arguments or simple theorizing, insofar as we have mentally attached our own name or label to them, they appear as ours.

It often seems more useful to treat Buddhist dhamma as something to be practiced instead of something to be theoretically scrutinized and debated. It’s not that scrutiny and debate serves no purpose, but rather that its purpose is limited, as in any practical craft or trade. It’s all well and good to deal theoretically with how to make a table or dig a tunnel through a mountain. That way, one is clear on the process and its aims. But eventually it becomes wheel-spinning, detrimental insofar as it promotes mental proliferation: craving, conceit, and ignorance. That leads in the direction of self-directed greed and anger, and away from the task at hand, which is, after all, the whole point of practice.

The practice, of course, is the path itself: sīla, samādhi, pañña. Aiming towards right thought, speech, and action, calm and mindful meditation, and an awareness of the transience, and selflessness of lived existence.