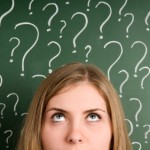 Let’s say you went back in time, and found a man staring at the horizon. He asks you, “What happens when you fall off the horizon?”

Buddhist teachings also encourage inquiry, but we have to be mindful of the questions we pose and not get caught up in wrong questions, or continually questioning that which may be unknowable. In many of the early suttas, Gotama pointedly does not answer all questions. Sometimes he simply doesn’t answer, and at other times, he points out the futility of asking such questions.

My favorite sutta in this regard is the Cula-Malunkyovada Sutta: The Shorter Instructions to Malunkya (MN 63). In this sutta, Gotama addresses wrong questions as well as inquiry engaged at the wrong time. The monk Malunkyaputta approaches Gotama, threatening to leave the holy life if Gotama does not declare answers such as the cosmos is eternal or not eternal. The cosmos is finite or infinite. The soul and body are the same, or they are not the same. After death the Tathagata does not exist or does exists, or both exists and doesn’t exist.

Gotama reminds Malunkyaputta that he never promised such declarations, to which Malunkyaputta agrees that there was no such agreement.

“Then that being the case, foolish man, who are you to be claiming grievances/making demands of anyone? . . . “

Don’t let it be said that Gotama never pointed out when people were being fools. Gotama then goes on to give an example of how timing of questions can be way off base. He then details that if a man were shot with a poison arrow and refused help until his questions about who the man was who shot him, of what class was he born, was he a warrior or a merchant, what type of bow was it, what animal were the feathers from, etc. that the man would die and still not know the answer to his questions.

I like Gotama’s determination. Society has been fussing over such questions about what happens after death, or is the cosmos finite or infinite for a long time. Theologians have been trying to find the answer to the first question for thousands of years, and scientists are working hard on the second. Do we really need to waste our time with such questions?

As Gotama points out, those types of questions don’t help you to end your suffering, they give you nothing in your practice to work with. What we do know is that all living creatures die, and we are in the que. We are alive now, so let’s focus on living now, on the “This is the path of practice leading to the cessation of stress.” Stress being dukkha.

Even worse than running in circles with questions is when people can’t accept some things may be unknowable, or that they don’t know the answer. And I can’t comment on than more brilliantly than astrophysicist and science cheer leader Neil deGrasse Tyson in the image below:

“There is no shame in not knowing. The problem arises when irrational thought and attendant behavior fill the vacuum left by ignorance.” Neil deGrasse Tyson

Posted in Articles and tagged ignorance, inquiry, MN 63, Neil deGrasse Tyson, questioning, sutta
← Dependent Origination: How did we get into this mess? (John Peacock)Loving Kindness Meditation →