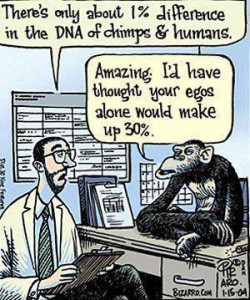 This week William Irvine, a philosophy professor in at Wright State University in Ohio, wrote a short piece for TIME magazine on insults (he is the author of a book on the topic). The premise is relatively simple: we are social animals driven by desires to reach the top and, of course, to hold back others who might compete with us. He writes:

What I realized was that the pain caused by insults is really just a symptom of a far more serious ailment: our participation in the social hierarchy game. We are people who need to be among people. The problem is that once we are among them, we feel compelled to sort ourselves into social hierarchies. If we were wolves, we’d fight to establish the social order of the pack. But since we are humans with outsized brains and language, we use words instead.

But, because we are so smart, we can also withdraw from the “social hierarchy game,” as he calls it. “In practical terms, this means becoming an insult pacifist: when insulted, you carry on as if nothing happened. Or if you do respond to an insult, you use self‑deprecating humor: you insult yourself even worse than they did and laugh while doing it.”

Interestingly, the same day a friend posted this from the Tibetan monk and founder of the Geluk school, Lama Tsong Khapa:

When I remember, see or hear living beings
speaking harshly or hitting me
may I meditate on patience,
and, avoiding anger, speak instead of their good qualities.

By developing, in the stream of my being, the pure wish,
which is based on bodhicitta,
holding other beings dearer than myself,
may I quickly bestow supreme buddhahood on them.

Je Tsongkhapa seems to take the advice a step further. No self-deprecating humor there, but instead actively praising the good qualities of his verbal attacker.

I don’t know about you, but I would have a very hard time doing this. At least in the short run. My strategy in the past has been metta-bhavana practice, as taught in the Triratna Buddhist Community (then the FWBO). In that practice, we ‘build’ on successive levels of cultivating loving-kindness; first ourselves, then a friend or supporter, then a neutral person, and then a ‘difficult’ person, finally ending by sending out loving-kindness throughout the world. This is a slow process – I could spend weeks working on one difficult person at times, and I’ve even found that difficult people who had been neutralized through the practice sometimes slipped back into the difficult category, but it does work.

Getting back to William Irvine’s suggestions:

The difference between the philosopher’s solutions and the Buddhist ones seems to be the standpoint from which each approaches the problem (and thus the solution). The philosopher gives a Darwinian story to frame experience, and thus escapes the problem by navigating the ‘game’ better. Yes, he talks about ‘withdrawing’ from the game, but it doesn’t seem that this is exactly what he means. He’s still in it. But when insults come, they no longer broadside him. He deflects them or absorbs them. This allows for his receptivity to kick in and relationships to grow, which is great, (after all, it moves him ‘up’ in the hierarchy).

However, the Buddhist approach seems to be a bit more radical. It shifts the standpoint to a universal moral standpoint (in the metta practice we often think of a phrase such as “may you be well, may you be happy, may you be free from suffering” and direct it toward all of the individuals in our meditation). Buddhists use teachings like, “remember, all beings were once your mother;” and, “all beings fear suffering and seek after happiness;” and of course the changing nature of all of the Eight Worldly Conditions: gain, loss, status, disgrace, blame, praise, pleasure, and pain. Remembering all of this, one not only lowers the shields, so to speak, but one is compelled to actively care for and comfort those we can in the world.

I know some Secular Buddhists might shy away from the idea that we could actually see all beings as having been our mother or that each being has some common core that we could love – and love in a similar way for all beings. However, I find this perspective appealing none the less, if only as an ideal toward which we each should strive.

Now, if any of you loggerheaded elf-skinned miscreants wish to take issue with any of the above, please at least make use of the Shakespeare Insult Kit in so doing.