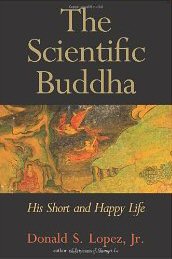 The book is a reworked series of Terry Lectures that Lopez gave at Yale University in 2008. As such it is more easily read but less complete than his earlier book on the same topic, Buddhism and Science: A Guide for the Perplexed, focusing somewhat more on the person of the Buddha than on the religion.

The Scientific Buddha, like its lengthier predecessor, is a difficult book to evaluate, containing much that is of merit and much that deserves questioning. Reversing the Buddha’s typical discursive technique, we will turn to the beneficial first.

The historical Buddha (that is, the Buddha of the canonical sutras) is far from the model of a modern scientist, and his dharma is far from modern science. In looking for unscientific aspects to Buddhism there is a bushel of low hanging fruit, and Lopez spends much of Scientific Buddha doing the gathering. He focuses in particular on issues of karma and meditation.

Lopez tackles the theory, popular among certain thinkers during the late 19th and early 20th centuries, that the Buddha’s notions of karma and rebirth either presaged, or are compatible with, Darwinist evolution. It doesn’t take much work to explode these claims, since evolution is an amoral process, and one that lacks the cosmological, world-creating implications of traditional Buddhist karma.

Similarly Lopez finds much to criticize in the current scientific adoption of meditation, particularly mindfulness meditation, in lay life and medicine. While mindfulness may work to alleviate certain symptoms of stress, or aid one in living a fuller life, this was not the Buddha’s aim in promoting meditative practice. Meditative states were associated with planes of potential existence, and his aim was to to gain complete renunciation, and escape the cycle of rebirth. So when journalists suggest that research on stress relief demonstrates (or could demonstrate) that Buddhist meditation “works”, something has got lost in the translation. Buddhist meditation was never intended simply to relieve stress, and it is hard to figure out how one would go about measuring renunciation.

Lopez also outlines the ways the historical Buddha was said to have superhuman, even supernatural, powers.

He has complete recollection of the past, including each of his own past lives as well as the lives of all sentient beings … He has full knowledge of the present in the sense that he is aware, or has the capacity to be aware, of all events occurring in all realms of multiple universes. He has full knowledge of everything that will occur in the future and is able to predict the precise circumstances under which various persons will become buddhas. … The Buddha described in the sutras is more a figure of science fiction than of science. (p. 43).

Though this passage exaggerates the role that the Buddha’s supposed supernatural abilities play in the sutras (I would say the claims are relatively marginal), nevertheless Lopez is right to point them out. And as he goes on,

… we might speculate as to what the traditional Buddha might say about the Scientific Buddha. In the Great Discourse on the Lion’s Roar … the Buddha declares, “Should anyone say of me: ‘The recluse Gotama does not have any superhuman states, any distinction in knowledge and vision worthy of the noble ones. The recluse Gotama teaches a Dhamma [merely] hammered out by reasoning, following his own line of inquiry as it occurs to him’ — unless he abandons that assertion and that state of mind and relinquishes that view, then as [surely as if he had been] carried off and put there, he will wind up in hell” (pp. 45-6).

Lopez’s Buddhism and Science reveals more clearly his background in Tibetan Buddhism. There the Dalai Lama plays a central role in his argument that Buddhism is not as scientific as some would make it out to be. The Dalai Lama is typically put forward as exhibit number one for scientific Buddhists, however Lopez shows how conflicted he is when it comes to matters that fail to agree with Buddhist orthodoxy, such as Darwinian evolution or the mind’s dependence upon the brain.

In Buddhism and Science, Lopez also makes much of the Buddhist use of the term “aryan”, as a word that eventually became absorbed into the racial categories of 19th and 20th century Europe. This is interesting and historically valuable, however the association with Nazism is unfair both to the Buddhist and the Victorian sanskritist uses of the term. And although Lopez claims to show that in some contexts the Buddha dharma was not to be taught to lower caste individuals, the argument he provides is tortured enough (a commentary which exists only in Tibetan, on a commentary on a commentary on a piece by Nagarjuna) not to provide much support for that conclusion.

It is not the role of the scholar to protect, preserve, and defend the religion that he or she studies. (p. 78).

My suggestion is that we allow the Buddha to remain beyond the world, completely at odds with the world, and with science. (p. 79).

These two conflicting assertions appear on facing pages in The Scientific Buddha, revealing a tension inherent in Lopez’s program. The role of the historian is to provide a faithful picture of the past. However many great historians also use history as polemic. Much of the story Lopez tells in these books is a story of how Buddhism came to the west, how it was seen, sometimes myopically, often with genuine if naïve interest, by Victorian sanskritists. The story of Buddhism’s discovery in the west is fascinating in its own right, and Lopez tells it well.  However in the telling, it also becomes a morality tale. It’s one in which calling a claim “Victorian”, linking it implicitly and explicitly to orientalism and imperialism, is sufficient to lay open its falsity.

Eventually, with the rise of the science of philology and of Oriental scholarship in the nineteenth century, the huge corpus of Buddhist texts began to be read, providing a wealth of new information. The myriad idols coalesced in to a single figure, who then became a historical figure, a founder of a religion, and a superstition became a philosophy. This is what used to be described unequivocally as progress. (p. 39).

Academic irony aside, is this not, in fact, a picture of progress? It’s far from the complete picture of the historical Buddha, but what Lopez charts for us is, in fact, an advance: one that takes us from a picture of myriad idols set up to wow the superstitious to a historical figure who founded a broadly practiced, rationally approachable religion.

The problem with Lopez’s rhetorical argument is that it is a form of genetic fallacy: since the Scientific Buddha was born among the ignorant, he must be a figment of the imagination. But no such conclusion follows from the premise. It may well be that Lopez’s bête noir is a “Victorian conceit”, and nonetheless an accurate, if partial, representation of the Buddha of the sutras. As the Buddha himself put it: one blind man may feel a plow, and another a broom, yet they both may be holding the same elephant.

Reading the sutras, or witnessing doctrinal debates in a Tibetan monastery, one can hardly avoid seeing the Buddha dharma as in large part a rational enterprise, steeped in an empirical approach to reality. Sutras such as Cankī or To the Kālāmas reveal a mind of uncommon openness to reason. Though as Bhikkhu Bodhi notes, one can take that message too far, it is nevertheless both profound and thrilling to find such rigor, no matter where in history it may appear.

Lopez suggests that the Buddha “remain beyond the world, completely at odds with the world”. This is, to make a point, not the whole truth, even when it comes to the Historian’s Buddha. The Buddha gave different messages to different people. To monks he advocated renunciation and liberation, to householders his advocacy was quite different. Why then must we assume that the only end to which meditation may legitimately be put is one of complete renunciation? It may be that in the Buddha’s day monks were the only ones likely to have the time or interest to meditate, but change happens, and there is nothing in the Buddha dharma that restricts meditation to a solely monastic context.

More pointedly, does Lopez see any room for innovation in the dharma? Bhikkhu Bodhi recently gave a lecture on the Buddhist response to Occupy Wall Street. Though half of his discourse was ostensibly on the dharma, the Historian’s Buddha said very little that is directly applicable to this protest movement. Insofar as we can glean it from the sutras, the Buddha spoke very little about issues of social and political justice. Bodhi’s Occupy Buddha is as anachronistic as anything put forward by Victorian sanskritists. Surely that does not imply that Buddhist notions of social and political justice must also live short lives.

In place of the Scientific Buddha, Lopez places a different character. Let us call him the Historian’s Buddha. This Buddha is a good deal more colorful than his contrasting likeness, a better storyteller, indeed a man of many countries and languages. He is also at times, let us face it, a bit too credulous of his own capacities, and something of a reactionary.

Lopez’s treatment serves as a welcome corrective to certain more panglossian interpretations of the Buddha and his dharma. It’s important for any who propose a more scientifically informed path, such as we find in secular Buddhist approaches, to realize that this involves judicious editing and reinterpretation.

Of course, it is always open for a historian to say that evidence from the Canon does not support a particular doctrine or practice. A proponent of secular Buddhism must come to terms with passages that deal with flying meditators, rebirth in hell and the Divine Eye. But Secular Buddhism would not be the first sort of practice that took positions contrary to the Historian’s Buddha dharma. One thinks, for example, of doctrines and practices involved in Tantra and Zen that break central monastic precepts, or certain Mahayana doctrines that reify nirvana as a kind of heaven.

Since these reformulations of the dharma have had long lives indeed, one wonders why a scientifically oriented Buddhist practice must expect to die young. Perhaps it will, but it would be a shame to forever restrict the Buddha to a version of the latin mass.