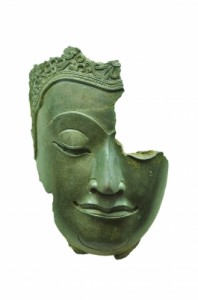 These narratives conflict in several areas, and recent evidence calls the latter narrative into question. However, as we will see, it is the basis for some later Mahāyāna theory and practice.

Many of us know the story well. The Buddha was born to high ranking nobility. He grew up in splendor, but already showed skill in meditation by attaining the first jhāna at an early age “while I was sitting in the cool shade of a rose-apple tree” (Majjhima Nikāya 36.31). Later on by all accounts he pursued the normal life of a politically powerful householder, eventually getting married. Then, tormented by existential concerns he left home around the time of his son’s birth, and set out on a course of self-discovery.

Before my Awakening, when I was still an unawakened Bodhisatta, the thought occurred to me: ‘Household life is confining, a dusty path. Life gone forth is the open air. It isn’t easy, living in a home, to practice the holy life totally perfect, totally pure, a polished shell. What if I, having shaved off my hair & beard and putting on the ochre robe, were to go forth from the household life into homelessness?’ (MN 36.12)

So, at a later time, while still young, a black-haired young man endowed with the blessings of youth in the first stage of life — and while my parents, unwilling, were crying with tears streaming down their faces — I shaved off my hair & beard, put on the ochre robe and went forth from the home life into homelessness. (MN 26.14)

And here Gotama compares his early life to that of a “run-of-the-mill person”, a “[typical] young person”:

After studying with meditation masters Āḷāra Kālāma and Uddaka Rāmaputta, he mastered all eight jhānic states including the so-called “formless attainments”, but learned that they were not sufficient to attaining true happiness, since they were themselves impermanent and subject to change. As a result, he resolved to go off into the forest and pursue a path of discovery, alone. But not before confronting fears natural to any of us:

In the Mahāsaccaka Sutta (MN 36) the Buddha talks about pursuing various ascetic practices, and finding them wanting. It was only after several years of blundering around in this manner that the Buddha-to-be finally hit on the correct route to awakening. After having discovered the correct path, and having come to complete realization, he seriously considered keeping it all to himself, due to the difficulty of teaching such an “abstruse, subtle, deep” dhamma (MN 26.19). Only after having a vision of Brahmā Sahampati did the Buddha decide to teach, “out of compassion for beings” (MN 26.20).

Taking the appearance of the Brahmā god as dream or poetic construction, the traditional narrative of the Bodhisatta’s life is perfectly comprehensible by contemporary, naturalistic standards. The Buddha was a normal, imperfect human being, subject to the same ignorance and confusion as the rest of us, who achieved an awakening of wisdom through mental and physical effort. This kind of story is both credible and motivational: it makes the path achievable.

The preceding story is not the only approach the Canon takes to the Bodhisatta’s journey to buddhahood. The Acchariya-abbhūta Sutta (MN 123; not translated at Access to Insight), contains a long description of the “wonderful and marvelous” qualities of the Tathāgata. This includes a lengthy narrative of the Bodhisatta’s time in his mother’s womb and his miraculous birth. Many aspects of the story recall narratives surrounding the birth of Jesus Christ that are themselves believed to be later interpolations, such as claims of his mother’s sexual purity:

When the Bodhisatta had descended into his mother’s womb, no sensual thought arose in her concerning men, and she was inaccessible to any man having a lustful mind.  (MN 123.10)

This is reinforced by suttas such as the Lakkhaṇa (DN 30), where there are claimed to be thirty two bodily marks “peculiar to a Great Man” that show he will either grow into a great monarch or a Buddha. These include: “On the soles of his feet are wheels with a thousand spokes, complete with felloe and hub.” (DN 30.1.2; from Walshe).

How one would go about counting a thousand spoked hub on someone’s foot is a bit of a mystery, but at any rate, these kinds of legends conflict at a very basic level with the naturalistic narrative we saw before. Now the Buddha is born not as a normal human being, but rather as a sort of demigod, supernormal both mentally and physically. To the extent that tradition took this as their inspiration for practice, it makes the possibility of attaining anything like the Buddha’s level of enlightenment to be a tall order at best.

In a typically incisive treatment on The Genesis of the Bodhisattva Ideal, German monk Anālayo compares the Pali version of the Acchariya-abbhūta Sutta with its counterpart in the Chinese Āgamas. Since the Āgamas are believed to have been translated out of a pre-Pali Sanskritic dialect (a Prakrit), they are probably at least as illustrative of the earliest strata of Buddhist dhamma as material from the Pali. At any rate, Anālayo shows that there are very significant differences between the versions of MN 123 in the Chinese and Pali. For example, none of the images of the Bodhisattva’s mother’s sexual purity appear in the Chinese (p. 29), nor does the Bodhisattva’s proclamation at birth. (p. 41). As he says,

When considered from the perspective of the didactic function of the Acchariyabbhutadhamma-sutta, the proclamation made by the bodhisattva Gautama may at first have come into being as just another facet in the overall scheme of exalting the Buddha. Yet, this particular marvel has consequences that originally may have been neither intended nor foreseen. (p. 42).

Similarly, Bhante Sujato finds that the Lakkhaṇa is a late sutta (“the prose sections have no Āgama cognates”). Though claims of the thirty two bodily marks are found elsewhere, he nevertheless says,

There is plenty of incidental detail in the Suttas and Vinaya that show that the Buddha was normal in appearance, so any freakish or supernatural interpretation of the marks must be wrong. Leaving a few of the bizarre elements aside, most of the marks are straightforward signs of physical beauty: black hair, white teeth, gold skin, and the like.

Neither Sujato’s claims nor Anālayo’s prove conclusively that these texts are later interpolations. For example, it is possible that the Chinese Āgamas are incomplete. And although some of the Buddha’s claimed bodily marks are “freakish” and “bizarre”, this does not on its own prove that they are fictional. However these concerns do dovetail with our prior concerns regarding narrative consistency. If we take seriously the stories of the Bodhisatta’s human ignorance, fear, and uncertainty, they call into serious question any story of a semi-divine or freakish Bodhisatta who knew his future from birth.

So what’s the big deal, anyway? Contemporary scholarship, not to mention scientific secularism, routinely sets aside miraculous, supernatural, or otherwise outrageous textual claims as unproven, absent very good evidence. We already know that mystical stories of gods receiving the young Gotama at birth (MN 123.17), or of miraculous jets of warm and cool water pouring from the sky to bathe child and mother (MN 123.19), are fictional. What more do we need to know?

To an extent this all matters for the development of the later tradition. Anālayo argues that these are some of the “necessary foundation” (p. 53) that inspired later developments of the Bodhisattva ideal in Mahāyāna Buddhism. As well, they may be early suggestions of the eventual super-human qualities that the Buddha took on in Mahāyāna concepts like the Lotus Sutra‘s Eternal Buddha, or the concept of Tathāgatagarbha.

In fact, these “marvels” fundamentally change the Buddhist path, by making its achievement a matter not of gradual practice, but of one’s fundamental nature or birthright. As Anālayo says,

In sum, the Acchariyabbhutadhamma-sutta reflects a significant change in the bodhisattva conception. Already at birth the bodhisattva is in possession of the supreme degree of perfection that other discourses consider the final result of his prolonged quest for awakening. As a consequence of this shift of perspective, the superiority associated with the status of the Buddha now becomes a birthright of the bodhisattva. (pp. 45-6).

Perhaps of more interest to contemporary practitioners is to contemplate the reasons behind this fundamental change. What are the causes and conditions by which stories and legends such as these get created in the first place? Why do they get memorized, repeated, written down, and believed? Anālayo says,

Gautama’s decease must have created a vacuum that needed to be filled. Bereft of the possibility of having a personal encounter with the living Buddha, for disciples in need of some form of emotional contact with the object of their first refuge, recollecting his marvellous qualities would have been of considerable importance. (p. 51).

In other words, the culprit is clinging, brought about by the pain of the Buddha’s death. If this is an accurate picture, and it certainly sounds so, then among the Buddha’s disciples were some in positions of control over the suttas who allowed their personal suffering to be reflected in confusions over what Gotama said and did, and even over his personal appearance.

Clinging, caused by ignorance, causing ignorance. So it is that stories arose of a semi-divine Buddha: stories that grew in the telling, like the fish that got away.

Any reflection along these lines should reflect back upon ourselves as well. If those people, so well-studied in the dhamma, and presumably meditation masters in their own right, were capable of such clinging, what does that say of ourselves?