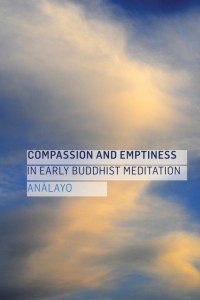 Having experienced for myself the difficulty of understanding Gotama’s teachings on both compassion and emptiness based on a reading of the Nikaya texts, I was excited to see Anālayo’s new book, Compassion and Emptiness in Early Buddhist Meditation. The book comes out in print in October 2015, but is available now in a Kindle edition. The author of such standard works as Satipatthana: The Direct Path to Realization and Excursions into the Thought-world of the Pali Discourses, Anālayo is a consummate scholar-monk who combines linguistic, historical and doctrinal expertise with a concern for helping dharma practitioners use the wisdom of the Nikayas to enhance their path to liberation. As a result, his current work is a tour-de-force that has something for everyone, whether your interest in the canonical texts is philological, philosophical, or meditation-oriented.

Anālayo’s choice of topics is provocative. We tend to think of compassion and emptiness as primarily Mahayana concepts, and the author points out that both terms are used sparsely in the Nikayas. Nevertheless, Anālayo uses key suttas to demonstrate that both concepts were central in early Buddhism, situating them in both brahmavihara practice and meditation on the formless spheres. He ends by presenting practical meditation instructions based on the Culasunnata Sutta (MN 121) that guide the reader to practice “the gradual entry into emptiness” beginning with brahmavihara practice.

I found much in this work that surprised and delighted me. To begin with, Anālayo is in the midst of translating the Chinese Agamas into English, many of them for the first time. This allows him to base his analysis not only on the Pali texts but on parallels in the Chinese and Tibetan canons as well. This is the first study I’ve ever read that employed this approach, and the first real detailed glimpse I’ve had of these texts side by side. The similarity of the Agamas with the Pali canon is often used as an argument for the “authenticity” of the canon, but what is fascinating when you do a close comparative reading are the variations between the Chinese and Pali texts and the subtle differences in meaning they introduce. Not to press the point here, but my sense is that the Agamas make a far more powerful argument for the view that the texts continued to evolve for hundreds of years after Gotama’s death. In any event, Anālayo himself takes these variations in stride, seeking not to pin down “what the Buddha really taught” but to understand what early Buddhists thought and practiced and, most importantly, what we can learn from them to enrich our own practice today.

Another surprise was the importance Anālayo assigns to brahmavihara practice in early Buddhism. Orthodox Theravada has tended to place little emphasis on the “divine abodes,” viewing them as a somewhat inferior contemplative practice compared to the strenuous meditative attainments of the jhanas. Anālyo, on the other hand, observes:

In the early discourses the brahmaviharas are mentioned frequently and seem to have been considered a prominent option for the systematic cultivation of the mind. . . . Through such cultivation, eventually the meditative practice of compassion and the other brahmaviharas will lead to absorption attainment. Their ability to lead into absorption is why . . . the divine abodes at times stand in place of the four absorptions, after the successful removal of the hindrances or other mental defilements. The cultivation of the brahmaviharas up to absorption level can then fulfill the training in mental tranquility that in early Buddhist thought forms an integral part of the path to liberation.

However, the kind of brahmavihara practice prominent among early Buddhists was not the practice most of us will be familiar with today.  The practice of taking up various categories of individuals as objects of kindness, compassion, joy and equanimity originated with the more recent teachings of the Vishuddimagga and Abhidhamma.  Originally, Anālayo demonstrates, brahmavihara practice consisted of radiating a sensation of each divine quality boundlessly, first in all directions and then above and below. The experience of the divine qualities radiating without limit is what conditions the mind to give attention to the realm of infinite space, and that leads it from there into contemplation of the other formless spheres. The author suggests that the early suttas offer a meditative path to liberation that does not require, at least initially, the intensive mental concentration of advanced jhana states.

That path is the “gradual entry into emptiness” Gotama expounds in the Culasunnata Sutta. The question that the doctrine of emptiness always raises is, empty of what? In this sutta, Gotama suggests that the gradual entry consists of systematically setting aside of a sense of concrete self. One begins by withdrawing awareness from people and animals, then from the forest, then from the contour of the earth itself. From there, one’s object of awareness becomes increasingly abstract, beginning with infinite space and withdrawing into infinite consciousness, nothingness, and signlessness. And yet, even this abstract and rarefied state of experience is still experience:

Even the sublime state of deep meditative signlessness, so utterly void, is not yet the final goal in the gradual entry into emptiness. This final goal requires insight into the impermanent nature of this and any other experience, together with the absence of any delight in it. Letting go in the most through way possible, relinquishing all and everything without any exception, enables the breakthrough to Nirvana, the supreme in emptiness indeed.

With wonderful audacity, Anālayo ends his book with a practical program of meditative endeavor designed to help anyone reach the doorstep of the supreme emptiness of nirvana. Afterward, he includes a number of his translations of the Agama parallel texts. There I was thrilled to read:

In this passage from Anālyo’s translation of the Agama parallel to the Karajakaya Sutta (AN 10.208), repeated for each of the brahmaviharas, we hear Gotama recommend brahmavihara practice as a portal to advanced attainment, not only for monks but for laypeople, for both men and women. That householders, who could not be expected to have the meditative supports of monastic life, could approach a level of attainment at least one step below arahantship through these practices, is evidence that early Buddhism did not share the monastic chauvinism that characterized the later tradition.

I’m very grateful for Compassion and Emptiness in Early Buddhist Meditation, and am pleased to recommend it to the SBA community. If you’re interested in putting some of Anālyo’s teachings into practice, we’ll give them a try at Practice Circle this week, 9/13/2015. Check out the Practice Circle Page here to learn how you can join us.