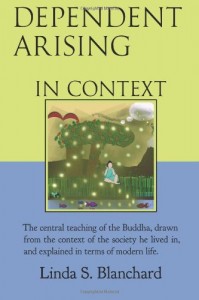 In the introduction to Dependent Arising in Context, Linda Blanchard credits the inspiration of Nanavira Thera.  One of the first Westerners to become an ordained Theravadin monk, Nanavira’s spirit echoes through Blanchard’s work.  Boldly idiosyncratic, driven both by his ferocious intellect and his fervent belief that the Pali canon held wisdom that had been ignored by the Buddhist traditions, his writings strike some as visionary, others as arrogant.   Whatever you think about Nanavira’s work, it is impossible to read him without having one’s thinking about Buddhism unalterably challenged.

While Blanchard hasn’t moved into a hut in the Sri Lankan jungle as Nanavira did, she has placed herself in a similar kind of intellectual isolation.  Without either academic credentials or the imprimatur of a traditional lineage, she has dared to suggest that one of the central tenets of Buddhism, paticcasamuppāda, dependent arising, has been misunderstood by fifteen centuries of commentators from Buddhagosa to Bhikkhu Bodhi.  In fact, she suggests that the 12-nidana version of dependent arising means essentially the opposite of what the traditions say it does.

That she has succeeded in this breathtaking endeavor sufficiently to have its central thesis published in Prof. Richard Gombrich’s  Journal of the Oxford Center for Buddhist Studies suggests that she might be on to something. Dependent Arising in Context contains her main thesis, an explication of the 12-nidana chain from the perspective of her interpretation,  and an attempt to refine a new definition of sankharas  based on it. Much like Nanavira’s work, Blanchard’s intriguing and illuminating argument takes us by the hand and leads us through its scholarly idiosyncrasies, leaving us sometimes frustrated but ultimately convinced.

One of the frustrations that may confront readers is the book’s refusal to settle into a recognizable genre.  It lacks the rigorous scholarly diction and apparatus of an academic work; nor does it have the comforting tone of a typical “dharma book” , despite its apparently having been written for practitioners.  It demands a reader whose search for dharma truth can accommodate a rigorous intellectual engagement with the Pali texts, a niche audience to be sure.  Yet those who are willing to make that commitment will find this most challenging of Buddhist doctrines unlocked in a way that opens a host of valuable insights into how our illusion of a static, vulnerable self is produced and maintained.

This is scarcely the place for a thorough explanation of dependent arising,  or an attempt to summarize the various interpretationsof it by Buddhist thinkers over the centuries.   Suffice  it to say that for 21st Century Westerners coming to the 12-nidana texts for the first time, confusion is likely to reign.   The middle steps appear to be a relatively straightforward description of how our sensual contact with the world leads to perception, craving and clinging.  But how does ignorance lead to consciousness?  How can consciousness precede sensory contact?  And how do two thirds of the steps precede birth?

The traditional understanding, at least from the perspective of Theravadin orthodoxy, is the one expressed by Buddhagosa:  The chain represents three successive lifetimes.   Ignorance in one’s past life leads to the sankhara-driven consciousness of the current lifetime;  craving and clinging foster the becoming that leads to birth in the next life.   Other commentators, especially recent Westerners, have tried to make the case that the chain depicts the way the self is created and recreated in every moment; but to understand  the chain in that mode requires a dramatic shift from the literal in steps 1 through 9 to the metaphoric in step 10, where we can’t be talking about real birth despite the apparent reference to the facts of embodied human existence.

Blanchard’s bold claim is that, as he did with other concepts such as karma and the Three Fires,  in his teachings on dependent arising Gotama is ironically repurposing Brahmanic doctrine to make the point that the atman wasn’t what the Brahmans thought it was.   She begins from Buddhist scholar Joanna Jurewicz’s observation  that the opening steps in the 12-nidana chain mirror the creation myth involving the deity Prajapati, whose role was later subsumed in Vedic mythology by Brahma.  It is reminiscent of creation myths from other cultures:  the god creates the universe from his inchoate potential, in order that he might know himself and be known.  In this drive to exist, he first creates himself and then a universe to be distinct from – and, in the process, the primal subject/object split.  In this myth, Prajapati creates from his own body a fire altar, which becomes his son, Agni.  The altar is splintered into myriad pieces to create the world and all of its inhabitants.

Blanchard relates this creation myth to the rituals of the Brahmans, sacrificial re-enactments of birth designed to purify the atman of the sacrificer and prepare it for ultimate reunion with the godhead.  This provides the context for Gotama’s repurposing of the ritual formula.  Just as in the creation myth, the self begins in unknowing ignorance; from its drive to exist, it brings the subject/object split of consciousness into being, and in order to differentiate itself, the myriad particularities of name-and-form come into being as well.  From there, the self, hungry for self knowledge in a universe that is only a reflexive manifestation of itself, grasps after the things it thinks it needs to survive.  In the process, it engages in the rituals of clinging and grasping that lead to renewed becoming.  But unlike the Brahmanic understanding of their rituals, the rebirth leads, not to reunion and bliss, but to continued suffering in the realm of dukkha.

As translated [birth, aging and death are] usually interpreted as literal birth (or, more accurately, as a rebirth).  However, when viewed within the context of a dependent arising modeled on transformative rituals, it cannot be meant quite so literally.  First of all, in the ritual setting, this “birth” would not generally be referring to a birth into an actual body at all, but into the world of one’s ancestors, or perhaps bliss with Brahma.  Within the lesson it is offering, though, it should be addressing the same point as the conversation with Baka the Brahma: not eternal bliss, just more of the same dukkha.  The Buddha is simply saying that the rituals we perform do not cause atman to go to bliss in another world, they cause what we mistake for atman to keep reappearing in this one.

Just as Gotama repurposed karma to mean not action but intention, and just as he cast the Three Fires as something not to sustain but to extinguish,  Blanchard is claiming that he repurposed the Brahmanic creation myth and its related rituals to demonstrate, not the soteriologic redemption of reunion, but the root of human alienation and suffering.

How is it possible that this interpretation eluded Buddhist scholars over the span of two millennia?  Blanchard’s conjecture is that audiences in Gotama’s day would have been so familiar with the mythological symbology he was employing that there was no need for him to elaborate the references.  Over the centuries, as these rituals faded out from Vedic culture, the context was lost.  The earliest commentators, writing in a world in which literal rebirth was still an element of the common cosmology, would have no way to catch the irony implied in Gotama’s symbolism, no way of knowing that Gotama was not intending the terms he used to be taken literally, and would therefore have assumed that when he said “birth,” he meant the real thing.

If such a potentially radical redefinition of dependent arising were not enough,  Dependent Arising in Context is also valuable for its introduction,  which contains a clear and compelling explanation for how the process John Peacock refers to as “creeping Brahmanism” may have affected the evolution of early Buddhist doctrine.  The book also presents an illuminating discussion of the concept of nutriment, demonstrating how the descriptions of the nidanas in the 12-step texts point not to the characteristics of the nidanas themselves, but to the “fields” in which the nidanas find their fuel.

Blanchard’s tone is always one of energetic enthusiasm, and without the restraints of academic convention, it’s understandable that she sometimes oversteps the grounding of her scholarship.  Her attempt in Chapter 3 to retranslate sankharas, traditionally rendered as “volitional formations”, as “drives” (to elucidate the thrust into being of the hungry self) results in intelligible translations of example suttas.  But it misses a key element: sankharas may represent the drive for becoming, but they are patterning , conditioning drives,  habit energies, imprinted with preconceptions that color and determine the contents of consciousness.  This essential patterning characteristic is lost in Blanchard’s reductive translation.

And she persists in what I believe to be a misleading mistranslation of dukkha as suffering produced by our clinging to the illusion of self.  She and I have argued about this point in these pages often enough, and I don’t intend to rehearse that argument here.   Let it suffice to say that while it is possible to understand dukkha in that way, such a definition renders the First Sermon unintelligible, and raises the conundrum of why Gotama would have included a production of the ignorant mind as one of the Three Marks of Existence.  As Stephen Batchelor has convincingly argued, the core of Gotama’s teaching is that dukkha is a permanent characteristic of our existential reality; nibbana lies not in trying to do away with it , but in fully embracing it.

After taking out one of the Three Marks, she also redefines anatta , “not self”, to mean a false sense of self – again, no longer a characteristic of existential reality but a product of the ignorant mind.  But this is surely a redundancy.  Thanks to the third mark, impermanence,  there are no stable, immutable identities to begin with, and so any sense of such identities is automatically false.   It is our failure to recognize and accept this that causes us to cling to illusions. Thankfully, she avoids redefining impermanence, but the damage has already been done.   These interpretive excursions have much less evidence and thought behind them than does her main thesis,  and the book would be stronger without them.

It was this sort of thing, however, that  most made Dependent Arising in Context remind me of Nanavira Thera.  It was that feeling of cracking one’s intellect against another that is brilliant, exasperating, and passionately devoted to the search for truth.   I think many readers are likely to find Dependent Arising in Context unsettling in its understated iconoclasm, but they are guaranteed to come away understanding one of the foundational doctrines of Buddhism in a radiant new light.

Blanchard is not, in the final analysis, writing for scholars.  She is writing for those of us who turn to the Pali texts for guidance in understanding the transformative power of the dharma.  Often, since I originally read these essays, I have caught a glimpse of something hungry to assert and reassert itself, something desperately searching the world for what will confirm and protect it.   Like all habit energy, if you don’t feed it, it calms down and begins to subside, leaving peace in its wake.  Dependent Arising in Context lifts the 12-nidana texts from their supernatural esotericism and presents them as a powerful tool to sharpen our observation of the self creating itself – and to enable us, by observing, to let go.