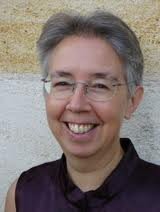 Martine Batchelor speaks with us about her book, Let Go: A Buddhist Guide to Breaking Free of Habits.

Habits. We all have them, most insidiously if we aren’t even aware of them. Fortunately, we’re not stuck with habits, and every moment is an opportunity to have a new and fresh beginning at redirecting our minds, so we can break that cycle of habit formation and continuation.

In support of the weekly meditation practice we’re doing here on the Secular Buddhist Association site, and Meditation Month sponsored by Tricycle Magazine, we thought it might be helpful to speak with one of the prominent meditation teachers, Martine Batchelor. Martine was born in France in 1953, was ordained as a Buddhist nun in Korea in 1975, and studied Zen Buddhism under the guidance of the late Master Kusan at Songgwang Sa monastery until 1984. Her Zen training also took her to nunneries in Taiwan and Japan. From 1981 she served as Kusan Sunim’s interpreter and accompanied him on lecture tours throughout the United States and Europe. She translated his book ‘The Way of Korean Zen’. Following Master Kusan’s death she returned her nun’s vows and left Korea.

She returned to Europe with her husband, Stephen, in 1985. She was a member of the Sharpham North Community in Devon, England for six years. She worked as a lecturer and spiritual counsellor both at Gaia House and elsewhere in Britain. She was also involved in interfaith dialogue and was a Trustee of the International Sacred Literature Trust until 2000.

Martine is the author of Principles of Zen, Meditation for Life, The Path of Compassion, Women in Korean Zen, and Let Go: A Buddhist Guide to Breaking Free of Habits. Her latest book is The Spirit of the Buddha. With her husband she co-leads meditation retreats worldwide.

So, sit back, relax, and have a nice French Lemon Ginger tea.

“Experiences are like cherry on the cake. It’s nice, but that’s not what’s going to make a difference to the habit.” — Martine Batchelor

“As long as we are focusing on the breath we do not feed our mental, emotional, and physical patterns. By returning to the breath again and again we start to dissolve their power. We develop a space between experience and our identification with it, thereby weakening the process that creates habits in the first place.” — Martine Batchelor

Posted in Book Reviews, The Secular Buddhist Podcast and tagged Martine Batchelor, meditation, mindfulness
← What kind of content would you like to see more of on the site, or added to it?Weekly Practice (5 Aggregates: Feeling & Body) →