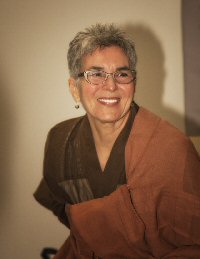 Our guest Myoan Grace Schireson speaks with us about equality issues in her book Zen Women: Beyond Tea Ladies, Iron Maidens, and Macho Masters.

It’s strange, don’t you think, that in our twenty-first century culture we still struggle with an imbalance in our attitudes towards people based on gender. How can this be? What are some of the problems we’re seeing, and why do they continue to bedevil us?

Tradition and cultural biases, let alone biology, seem to have a hand in prolonging our entrapment with viewing our friends, students, and teachers with gender colored glasses. Instead of seeing the tremendous potential of a student, or admiring the skills of a competent teacher, we cloud that vision with reactions that the positive behaviors don’t warrant. Our practice is, at least in part, about learning how to perceive more clearly, and act in a skillful way. Yet we’ve seen that our biases take the lead, historically and in more recent events regarding growing the sangha by the ordination of women as monastics.

Abbess Myoan Grace Schireson is the founder and head teacher of the Empty Nest Zen Group, Modesto Valley Heartland Zen Group, and the Fresno River Zen Group. Grace is a Dharma heir in the lineage of Shunryu Suzuki-roshi, founder of the San Francisco Zen Center. Grace has practiced Zen meditation for more than 35 years and is author of the book Zen Women: Beyond Tea Ladies, Iron Maidens and Macho Masters. In the United States she has undergone her Soto Zen training with Sojun Mel Weitsman-roshi of Berkeley Zen Center, from who she received Dharma transmission from in 2005. Grace also has trained in Rinzai Zen in Japan under Keido Fukushima-roshi, retired abbot of Tofuku-ji Monastery located in Kyoto. She has taught classes on Zen throughout the United States and has also been trained as a clinical psychologist, teaching Asian methods of quieting the mind using techniques suitable for Westerners.

So, sit back, relax, and have a nice Gyokuro tea, which is Grace’s favorite, so thank you Grace for this episode’s recommendation.