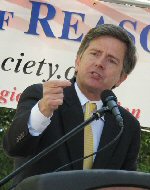 Sean Faircloth returns to speak with us about his new book, Attack of the Theocrats, and his new role with the Richard Dawkins Foundation.

This is not a topic we talk about very much, this separation of church and state, and that may be putting our freedoms at risk. As a practicing Buddhist, I imagine the idea of a Christian biblical flood being taught as science in the classroom to your children might not sit so well with you. But for many others, the response is, “what’s the big deal?” We’re just not in the habit of questioning the privilege one religious view enjoys over other religious views, or non-religious views.

What those same supporters of unscientific ideas like intelligent design fail to realize is that by opening the door to one religious ideological stance, they open the door to them all — including ones with which they disagree. Protecting this separation between our choices in what we find personally uplifting, and how we govern as a society, protects all of us.

Sean Faircloth served five terms in the Maine Legislature, served on the Judiciary and Appropriations Committee, and was elected Majority Whip by his colleagues. In two years as Executive Director of Secular Coalition for America, Faircloth conceived and led the Secular Decade plan, a specific strategic vision for resecularizing American government. As Director of Strategy and Policy for the Richard Dawkins Foundation for Science and Reason, Faircloth will expand his strategic efforts on behalf of the entire secular movement, speak regarding policy issues, discuss the ideas in his book, and seek innovative ways to improve the secular movement. Faircloth has spoken around the United States about separation of church and state, the Constitution, children’s policy, obesity policy, and sex crime law.

So, sit back, relax, and have a nice Mint Julep.

Posted in Book Reviews, The Secular Buddhist Podcast and tagged Atheism, RIchard Dawkins Foundation, Sean Faircloth, secularism, separation of church and state
← What is this Path of Mindfulness? (John Peacock Talk)Episode 116 :: Yeshe Rabgye :: The Best Way to Catch a Snake →