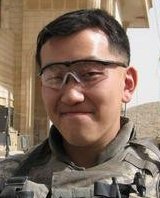 Secular Buddhism seems like an oxymoron, especially when we simply take the words themselves at face value without any deeper understanding of what we mean. Military Buddhists might be another phrase that elicits a similar response.

There are many service men and women in our armed forces that would describe themselves as Buddhist. And, even some who do not may have an inclination to Buddhist inspired practices. They come to this tradition sometimes as part of their personal family heritage, and sometimes as an adopted religion. That may have occurred early in their lives, or after already being in the military. However these men and women have found themselves as Buddhists in the armed forces, the simple fact remains: both are a part of their daily existence, and how those aspects contrast, blend, and work together is a challenge those of us on the outside can only guess at understanding.

Mike Nam was in the Marines from 2000 to 2004, and from 2005 to the present is a Medic in the California Army National Guard. Mike has been on three combat deployments, is currently in his fourth year at South Baylo University, and is the creator of the U.S. Military Buddhists page on FaceBook.

So, sit back, relax, and have a nice mulled wine, heavy on the cinnamon and light on the cloves. Merry Christmas, Clarence.

The music heard in the middle of the podcast is from Rodrigo Rodriguez. The track used in this episode is “Cross of Light” from his CD, Shakuhachi Meditations.