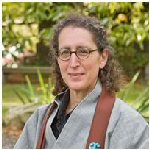 Early Buddhist art was missing one particular figure: Buddha. That changed over time, as Buddhism reached new shores and cultures, as the teaching itself has found new forms of expression. We see a growth of artistic expression, not just practice techniques, as Buddhism encounters contemporary Western influences, still finding ways to inspire us.

I’d also like to extend a special thanks to our friend Rodrigo Rodriguez, who has generously allowed us to feature sound clips from his new release, The Road of Hasekura Tsunenaga: Music for Shakuhachi Flute, appearing for the first time on this podcast with a clip from the piece “Kogarashi”.

So, sit back, relax, and have a nice Cherry Coke.

The music heard in the middle of the podcast is from Rodrigo Rodriguez. The track used in this episode is “Kogarashi” from his CD, The Road of Hasekura Tsunenaga: Music for Shakuhachi Flute.