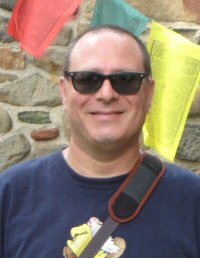 Stanford Forrester talks with us today about Buddhism and Haiku.

Buddhism has a long tradition of finding expression in the arts. Perhaps one of the most in alignment with our practice of present moment awareness is that of poetry, specifically haiku. There are few forms which, in so few words, provide the full spectrum of the experience of the moment.

Stanford M. Forrester is a past president of the Haiku Society of America as well as the editor of bottle rockets: a collection of short verse. Stanford has had poems published in 33 publications in the US, Japan, Canada, Ireland, Romania, England, and Australia. His work has appeared in 22 anthologies, most notably in Haiku edited by Peter Washington in the Everyman’s Pocket Poetry Series published by Knopf and American Zen: A Gathering of Poets published by Bottomdog Press.

In 2004 he took first seat in the 57th Annual Basho Anthology Contest in Ueno, Japan and 3rd place in the Kaji Aso Contest in Boston. In 2001 he was the recipient of the Museum of Haiku Literature Award, given by the Museum in Tokyo and the Haiku Society of America. Most recently he has received an artist fellowship from the Greater Hartford Arts Council. He has been a judge for the Japan Society and the United Nations International School’s Children’s Haiku Contest in the New York City Region for four years. He has taught workshops at places such as Wesleyan University, the Zen Mountain Monastery, the World Haiku Festival in Bangalore, India, and Kripalu.

So, sit back, relax, and have a nice, properly frothed green tea.

Meditation hall
an ant carries away
my concentration