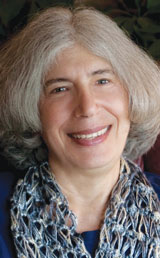 Toni Bernhard talks about her book How to Be Sick: A Buddhist-Inspired Guide for the Chronically Ill and Their Caregivers.

Raise your hand if you’ve ever gotten a cold. Felt run down. Had no energy. You’ve got the crud that’s been going around the office. Of course, we’ve all been sick in this way at some time in our lives. But even in that place of Nyquil-besotted sniffling and drowsiness, we’ve never really questioned whether or not we’d get better. We know we will, it just doesn’t typically come up as something to think about, and this confidence is one of the unsung heroes of making our illness tolerable.

But what if the discomfort, the lack of energy, the sick feeling of something being wrong, what if that doesn’t go away? What if you find yourself ill, with no prospect of getting better? We think that, as Buddhist practitioners who are well versed in the signs the Buddha is said to have seen during his daring sojourn away from the palace, sickness is something we can handle. And sure, we can. When we’ve got the deck stacked in our favor, and we know we’re going to feel better!

It can be more challenging when our physical suffering is ongoing, and isn’t going to get better. How we address this, how we learn from it, how we resolve to take the opportunity to really experience this teaching during the harder times, when we’re not in our comfortable sangha and the only pain we have is in our knees for an hour, that’s where we can also make tremendous progress.

Toni Bernhard became ill while a university law professor in the prime of her career. She tells the reader how she got sick and, to her and her partner’s bewilderment, stayed that way. Toni had been a longtime meditator, going on long meditation retreats and spending many hours rigorously practicing, but soon discovered that she simply could no longer engage in those difficult and taxing forms. She had to learn ways to make ‘being sick’ the heart of her spiritual practice — and through truly learning how to be sick, she learned how, even with many physical and energetic limitations, to live a life of equanimity, compassion, and joy. And whether we ourselves are sick now or not, we can learn these vital arts of living well from How to Be Sick.

So, sit back, relax, and have some Sleepy Time tea, because there’s very little more comforting when you’re not feeling well.

“At first, I felt humiliated having to use subterfuges and to undergo such indignity just to relieve myself. I blamed myself for my life having brought me to this sorry state. After a while, the self-loathing shifted to a defiant but ugly cynicism: healthy people be damned; this is what I’m doing, so shove it if you don’t approve. Fortunately, the cynicism gave way to compassion for myself.” — Toni Bernhard

“Buddha didn’t say that life is only suffering, stressful, unsatisfactory. He simply taught that dukkha is present in the life of all beings.” — Toni Bernhard

“At a Spirit Rock retreat in the late 1990s, Joseph Goldstein gave what has come to be my favorite description of anicca as I experience it in everyday life: ‘Anything can happen at any time.'” — Toni Bernhard

“Sticking with a practice even though it might feel artificial or fake still allows that practice to enter our hearts, our minds, and our bodies. This begins to change our conditioned response from a painful one (in this case, envy) to a wholesome one (in this case, joy).” — Toni Bernhard

“Unless we remain vigilant by cultivating awareness—called “mindfulness” by Buddhist practitioners — the mind can talk us into or out of just about anything, no matter how counterproductive or harmful the consequences.” — Toni Bernhard

“Practicing compassion is the act of reaching out to ourselves and to others to help alleviate suffering. By using the practice I just described, instead of allowing stressful thoughts about family and friends to proliferate and then fester, I consciously shift my mental state and take action. That action has never failed to alleviate my suffering and, as a bonus, give me a big lift.” — Toni Bernhard

“Dukkha is, after all, an equal opportunity employer.” — Toni Bernhard

“I found a way to break the vicious cycle of suffering. I did it by consciously moving my mind toward one of the four sublime states. As I lay in bed, the flu-like symptoms were indeed physically unpleasant. But, instead of mindlessly allowing aversion to arise as I had done thousands of times in the past, I realized I had a choice of where to put my mind. So I consciously moved my mind to loving-kindness, silently repeating, ‘Dear sweet, innocent body, working so hard to support me.’ Directing this well-wishing at my own body was my doorway out of dukkha. I got off the wheel of suffering. I was free from aversion to my illness and from all that can follow from that aversion—for example, becoming and being reborn as a bitter and resentful person.” — Toni Bernhard

“I was helped by an inspiring teacher named Byron Katie. Katie, as everyone calls her, encourages us to question the validity of what she refers to as our stressful thoughts. I highly recommend her books and her website.” — Toni Bernhard

“This work is not necessarily about ridding oneself of stressful thoughts but rather about examing their validity.” — Toni Bernhard

“According to the Buddha, wise speech is endowed with five qualities. It is truthful, spoken with good-will, spoken beneficially, spoken affectionately, and spoken at the right time. These are usually reduced to a formula that contains three considerations: Speak only when what you have to say is true, kind, and helpful.” — Toni Bernhard

“Included in the notion of wise speech is what the Buddha called noble silence — knowing when not to speak.” — Toni Bernhard