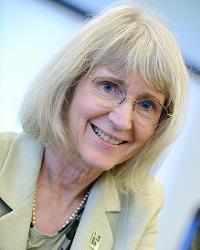 Dr. Eugenie Scott from the National Center for Science Education speaks with us about keeping faith traditions separate from science in our classrooms.

Hi, everyone. There’s a topic I don’t get to talk about very much on this podcast, something I’m quite passionate about because it is paramount in the distinction between faith and knowledge. Secular Buddhists may incline more towards the side of empirical evidence, and along with that seem to have a more positive relationship with science’s description of the natural world. Those who are more inclined towards the revealed understanding of faith traditions are welcome to do so, and it is hoped that we can all agree on the basic observable facts about the world we share.

Unfortunately that’s not the case, as there continues to be a rejection of demonstrable processes in favor of religious assertions thousands of years out of date. Disagreement isn’t so much of a problem, that’s an expected outcome in human endeavor. The challenge is that all parties are not behaving in an upfront and honest way, and are attempting to push a religious agenda by masquerading it as science.

Within the past couple of weeks, thanks largely to the efforts of organizations like the National Center for Science Education, the Texas Board of Educators voted to approve scientifically accurate supplementary materials and to reject creationist-inflected materials in classroom textbooks. This was a hard won victory for rational thought, but unfortunately, it is only a single win. Other battles are yet to come.

If you’re still not sure what this has to do with any kind of Buddhism, consider: even if you’re not particularly interested in science and are a more faith based traditional practitioner, it’s not your faith that’s being pushed.

Eugenie Scott, a former university professor, is the Executive Director of NCSE. She has been both a researcher and an activist in the creationism/evolution controversy for over twenty-five years, and can address many components of this controversy, including educational, legal, scientific, religious, and social issues. She has received national recognition for her NCSE activities, including awards from scientific societies, educational societies, skeptics groups, and humanist groups. She holds eight honorary degrees from McGill, Rutgers, Mt. Holyoke, the University of New Mexico, Ohio State, the University of Wisconsin-Milwaukee, Colorado College, and the University of Missouri-Columbia. A dynamic speaker, she offers stimulating and thought-provoking as well as entertaining lectures and workshops. Scott is the author of Evolution vs Creationism and co-editor, with Glenn Branch, of Not in Our Classrooms: Why Intelligent Design Is Wrong for Our Schools.

So, sit back, relax, and have a nice Punctuated Equilibrium, on the rocks. Yes, that’s another drink scientist challenge!

Posted in The Secular Buddhist Podcast - On Indefinite Hiatus and tagged Eugenie Scott, NCSE, science, separation of church and state
← How to Engage Effectively in Controversial DiscussionsKnowing When to Speak Up or Shut Up! →