While watching the Dalai Lama on YouTube the other day I was struck by a strange sensation.

Now don’t get me wrong. I like this ‘simple monk’ as Tenzin Gyatso likes to call himself. I had a long private audience with him years ago in Dharamsala that left me flying high for weeks afterwards, and met him again on several occasions. He’s warm, friendly and chuckles a lot. Audiences invariably chuckle along with him, not because he’s mastered the art of comedy but simply because his mood is infectious. 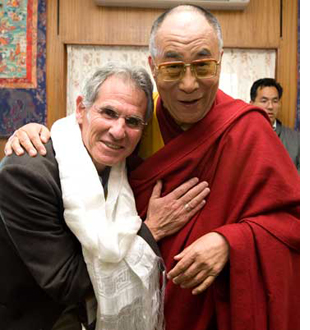 But there’s more to it than that. In a video of a Mind and Life Institute conference, packed with academic brains like Richard Davidson and Jon Kabat-Zinn, I noticed without surprise that all eyes were on His Holiness. Every one was primed to smile instantly at his magical touch, to erupt in indulgent laughter at the corniest joke. It’s amazing how many scientists jump to less than critical conclusions about the insightfulness of his remarks.

This isn’t the Dalai Lama’s doing. To paraphrase a familiar saying, magic is in the eye of the beholder.

From the very beginnings of my encounter with Tibetan Buddhism almost forty years ago I learned that the teacher is not only there to impart information, or even blessings. He is to be revered. Unlike their brethren from other Buddhist cultures, Tibetans favor the tantric method, said to be the highest, most secret and most sublime of the Buddha’s teachings. In theory, it’s accessible only to those who have already mastered both the narrow path of personal awakening and the broad way of the bodhisattva. However, judging from the way that Tibetan Buddhism is transmitted, you’d be forgiven for thinking that tantra is not the pinnacle of all practices but their very foundation. The lama is everything.

Tantric initiates are required to see the lama’s behavior as ‘fully enlightened.’ What that means is unclear, though all texts agree that it’s indescribable. Many insiders, especially younger ones, presume it to include telepathic powers, perfect virtue and inscrutable intentions.

I know. I did once. There was a certain amount of work involved. I maintained a view of the infinitely wise teacher through ongoing conversations with others of like mind. My belief was reinforced by constant reminders that others believed the same. We put our hands together reverentially when mentioning a teacher by name, never criticized any of their decisions and shut doubt resolutely out of our hearts.

It is a fragile view though. Even after years of practice it withers quickly away without the consensus of the faithful. When I disrobed and drifted back to the material world, I found myself thinking of people like the Dalai Lama as ‘just’ human. When he made questionable remarks about homosexuals, inexperienced judgments on marital relations and fuzzy statements about science, I noticed that many of his Western believers leaped into the breach to quickly rationalize his words.

By now however, I felt no such compulsion. I was out of the loop.

To his credit, the Dalai Lama has learned from his gaffes. There have been short-lived furors, but the media soon leaves him again in peace. Despite that, and although he’s widely reviled in China, his image in the West is stellar. Even the extraordinary Dorje Shugden affair, in which a murderous schism followed his remarks about an invisible demon, was quickly ignored by the press. Seventeen years later wounds still run deep within Tibetan society and clearly will do so for years to come.

The Dalai Lama is today exceptionally open to non-Tibetan traditions. He is one of the world’s elite few whose primary job is to promote world peace in the most warm and fuzzy, non-specific ways. Considering he’s the product of a medieval monastic system he’s made great strides, widely outpacing his Tibetan contemporaries. The oldest of those, with whom I studied years ago, exhibited levels of chauvinism and intransigence that surprised me and hastened my withdrawal from formal Buddhism.

Since then my Buddhist studies have focused especially on these early teachings. In them I discern a flesh-and-blood Buddha who questioned life’s purpose with the angst familiar to thoughtful human beings of every time and place. His frailty and humanness are precisely what make him accessible to me. That’s how, when I don’t understand him fully, I think he might have been on to something, and don’t just dismiss it. The usefulness of faith it that it gives you time to gain your own experience and come to personal conclusions. Leaning on it blindly without trying to understand is one of those unfortunate human failings that give religion a bad name.

I can live with this sort of pragmatic faith. I’m just a faulty and insecure product of the modern age. I don’t have to bend my credulity or rationalize plain wrongs into twisted rights. I don’t have to insist the Dalai Lama is a fully Enlightened Buddha in order to like him. And, if he rambles on before getting to the point of his lecture, I don’t feel guilty about changing channels. Perhaps he was having an off day. Who doesn’t?

Posted in Articles
← Episode 113 :: Lawrence Levy :: Growing Juniper"This World or the Other": The Contradiction at the Heart of Buddhist Tradition →