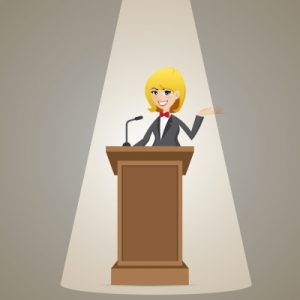 Image courtesy of iosphere at FreeDigitalPhotos.net

With the first debate last night, we’re in the thick of political season in the US, a once every four year cycle of presidential agita that dominates the news for months. It’s natural to bemoan the foolishness of it all, to wax satirical or cynical on the state of the nation, but the inconvenient truth is that it matters a great deal. Even a choice between two imperfect candidates (and let’s be honest, all candidates are imperfect) can be a choice that impinges on the lives of millions for better or worse.

How do we navigate these treacherous waters most wisely? Does the approach found in early Buddhism have anything interesting to tell us?

In one sense it does, but it’s not advice we might find particularly congenial. For the Buddha’s most adamant advice to his followers was to avoid talking politics at all, terming it “frivolous chatter” (tiracchānakathā) in the Brahmajāla (DN 1) and Sāmaññaphala Suttas. (DN 2):

In its place, he recommends “ten topics of discussion”, which all relate to awakening:

Talk on fewness of desires, on contentment, on solitude, on not being bound up with others, on arousing energy, on virtuous behavior, on concentration, on wisdom, on liberation, on knowledge and vision of liberation. (AN 10.69)

What are we to make of such odd advice?

Before answering this question, we should remind ourselves of the Buddha’s advice on right speech generally. His analysis is subtle and detailed. One is to avoid lies of course, but also harsh, abusive, or divisive speech, as well as idle chatter. One is instead to cultivate speech that is kind, affectionate, beneficial, and that brings people together. (AN 10.176). This is the usual analysis of “right speech” in the Eightfold Path. (E.g., SN 45.8).

This analysis however might make it seem as though right speech were incompatible with speaking harsh truths. Elsewhere the Buddha tells us that it is proper to give voice to such truths, but only “at the time to use such speech”. (MN 58). It is right to speak hurtfully, but only if by doing so one believes at the time that one can bring the other person to more wholesome or skillful ways of being. If one believes such speech is likely not to be successful, “One should not underrate equanimity towards such a person.” (MN 103). That is, one should hold one’s tongue, and practice on oneself instead.

This is actually a pretty high bar on harsh speech. Most of the time when we speak harshly we do so in order to vent or to make ourselves feel better, and not because we really expect to change anyone’s mind. Or rather, when we are young we may be naïve enough to believe that we can change minds by yelling, but as we reach maturity we begin to realize that much disagreeable speech is basically ineffective or even counterproductive.

It seems however that there must be a space for speaking disagreeably in a political context. While some nasty political claims are false or overblown, many are not. Let’s be honest: politics is often quite ugly. It would be a lie therefore to sugarcoat it, just as it would be a lie to cynically claim it were all only depravity.

But how can political speech amount only to idle chatter? This is what it seems the Buddha is saying. One response we may have is to note that the Buddha was talking to “recluses and brahmins”, that is basically to monastics and other (we might say) professional seekers of wisdom. He was not talking to laypeople, who it is assumed might chatter on about all sorts of things.

But if this is a response, it’s not very persuasive, particularly from a secular perspective. One hallmark of contemporary secularism is to partially collapse the distinction between monasticism and laicism, to allow for the kind of dedicated lay practice that was traditionally not well recognized. While some monastic practices may plainly conflict with lay duties, a secular approach should open us up to questioning whether all monastic practices so conflict. Perhaps they are practices we should consider for ourselves. What was the reason for them? Was it a good reason?

In particular, political speech tends to foment divisiveness and hatred. People with whom we might otherwise be perfectly congenial suddenly come across as mean-spirited, even vile. We often find ourselves acting from quite impure motives of hate and greed, even if we do so telling ourselves it is for the greater good. And while most of us will assent to some version of the Christian claim, “Hate the sin but not the sinner,” the extent to which we are actually doing this may be less than we like to imagine.

We also may wonder to what extent political speech is really frivolous. Probably some of it is, for example discussion about “Which of these two kings has the greater wealth … and power.” (Ud. 2.2) But particularly nowadays living in a representative democracy, some political speech is surely right and good, even necessary. We need to know what our politicians plan to do for us when in power. We need to hear arguments for both sides of all issues. We need an informed electorate, something that the Buddha could not have foreseen.

Further, it’s not only laypeople who constitute the electorate. Even monastics can and should vote. To do so skillfully means to engage in political discussion.

There is a related question as to whether it’s really wrong for laypeople to gossip and chitchat, something the Buddha seems to have felt. It seems as though ordinary life is at times enlivened by idle chatter, just as it is by a thousand meaningless but happy enterprises with which we busy ourselves, from crossword puzzles to hobbies to sports. Enlivened we may be by such activities, but from the Buddha’s perspective they do not lead to awakening, and so should be deemphasized.

In this context perhaps it makes a bit less sense to understand the Buddha’s words in the sense we might like to. For basically the Buddha is making a distinction between worldly concerns and awakening. And worldly concerns — all worldly concerns, including very important political ones — are essentially different from concerning ourselves with awakening. They are, one might put it, like rearranging the deck chairs on the Titanic. That is, no matter who is President, there will be impermanence, there will be dukkha, there will be non-self. Politics is not the route towards awakening, and the Buddha saw it as his task to lead us relentlessly in the direction of awakening. If his approach seems strict at times, we must remember that it was directed at what he saw as our ultimate benefit.

The Background to Awakening

While self-improvement and awakening are possible nearly anywhere, at any time, nevertheless it would be foolish to claim that one’s sociopolitical environment played no role in making the process harder or easier. In more specific terms, the Buddha’s saṅgha depended on royal protection and even policing in case of danger. When such patronage decayed in India, the result was the complete destruction of Buddhist libraries, institutions, and indeed all Buddhist presence there for many centuries. Surely this led to making progress along the Path significantly more difficult in India.

All things come about due to causes and conditions, and perhaps the most important condition under our collective control is political. Do we then, as the Bodhisattvas do, essentially put aside our desire for awakening for a time in order to do the groundwork necessary for all of us to improve together? Perhaps we do, at least some of us, some of the time. Without that help, we all lack the groundwork to progress. This is an aspect the Buddha seems not to have reflected much upon. Although he did provide something of a blueprint for good kingly government, there is no evidence he actually discussed it with kings.

We have worked ourselves into something of a quandary here. Is politics a worldly detriment to progress, or a necessary condition for it? If we look to political action as a form of practice rather than as a form of conflict, we may find a skillful way to square this circle. But to do that is to engage in it mindfully, through awareness of the quality of our thoughts and actions in the present moment. Awareness of the body may be useful in this regard, where often we can sense hatred or greed through bodily tension even when it remains elusive to us in thought. In this regard perhaps the technique of “focusing” that Mark Knicklebine discussed in an earlier blog post would also be apt.

Needless to say, this work will not be easy. We often find ourselves carried away by fears, worries, and heated emotions, a flurry of thoughts that blind us to our own best interests. If so it may be time to follow the Buddha’s advice and abandon it for a time. One should not underrate equanimity. It is, after all, delusion to suppose that any one of us is in control of things to the extent that our attachment to them might suppose.

John Ireland (1997) The Udāna and the Itivuttaka (BPS)