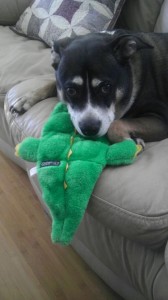 I’m doing away with my personal blog, Cosmic Pathway, so am reprinting some of my Buddhist articles here.

One morning I took Cannon outside to do his business, and discovered my neighbors digging holes in the cement of their carport adjacent my side yard. Nearby they had a pile of wood and bags of cement. Mind you my side yard is about three feet wide, where I have two trees and had just planted four new bushes. It’s a small, narrow plot that runs along the side of my house. To step off the dirt off my yard is to step on their carport.

My volley of questions set off a defensive stream of responses from them about how they asked the park’s permission a year ago, how they wanted to increase their property value, how they were sick of my dog peeing out there. We went back and forth, tempers rising, accusations rampant and loud.

“I’m going to call the park manager now,” I spat, “and have them force you to take that down. No one asked me, and this affects me in a big way.” With that I stormed into my house, shaking with rage. I felt that heady sense of me arising, my boundaries being invaded, my authority ignored. Yet, while the maelstrom of thoughts stormed with justifications, a voice inside said to look at the anger, step away from the thoughts. Just be in the experience for now.

I sat and just allowed myself to feel the emotion of anger roiling within my body, tightening my stomach, clenching at my throat. While there was this rush of excitement, the anger itself in the body was distinctly uncomfortable, disconcerting. I wanted it gone, but the thoughts in my head continued to batter me with reasons I was right, reasons I should be angry. My ego was indignant and wanted revenge. While I sat, I could feel and see the thoughts, the physical sensations, and the emotions as very separate processes. I resisted following the thoughts, and it was amazing how quickly one thought would arise, disappear, only to have another follow in the angry wake.

Yet, something through it all, through the feeling of anger, through the many thoughts that wanted to validate the emotion, I knew anger was not the path I wanted to follow. I was a war with my neighbor, and I was at war with my mind, my feeling of self. If we could come to battle over the building of a fence so quickly, so easily, fall into hatred and resentment over 15 feet of wood, it’s no wonder that people end up killing each other over what seems like bigger causes. If I could not have peace in my own backyard, over something like a fence, how could I ever have hope for this planet that we might someday live in peace with people we perceive as enemies?

I continued to sit and just observe what was taking place inside me. I didn’t follow the thoughts, just watched as they arose, the justifications for anger along with the arguments for peace. If I called the park and successfully had them force the neighbors to tear down the fence, then what? The war between us would still be there. Then they would feel justified in being angry at me. Little by little the anger dissipated, the thoughts calmed, and after about 45 minutes, I reached a place of calm, though my stomach was still in a knot. It would remain until there was peace.

My neighbors were fixed on this fence for whatever reason. I would not be able to talk them out of it. I listened to the sound of hammering, and I knew I had to be the one to loosen my grip. I had to give up my anger in favor of peace. I didn’t like the fence, but was it worth feeling angry and resentful, hatred towards my neighbors? No. I had to rise above this. No matter whether I was right or wrong, I had to make peace in my own backyard.

By 5:30 pm the hammering had stopped. Cannon needed to go out, so I sucked in my breath and braced myself to face the fence. My neighbors sat in their carport, enjoying drinks after the day of fence building. The father who I had argued with saw me and rose, sheepishly asking what I thought. The fence was not as bad as I feared, at least no blocking my window light. I knew my bushes would die. Taking Cannon into that small area was difficult, but I conceded. “It’s not as bad as I thought it would be, and I apologize for blowing up at you earlier. I shouldn’t have gone off at you like that.”

He came right over to me with his hand extended, meeting me in this place of peace I was trying to create. “No, no, I’m sorry you were surprised and upset by this. I shouldn’t have yelled at you either. Truce, please? I don’t want to be enemies with you. We are neighbors.” I shook his hand, feeling relieved the apologies had been mutual, amazed at how easy it was once I was open to release.

I still don’t like the fence. My bushes died, but most importantly, I have made peace in my own backyard.