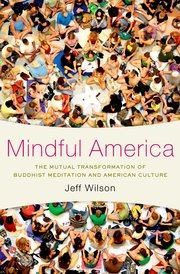 I was by turns excited, puzzled and exasperated as I read Jeff Wilson’s Mindful America: The Mutual Transformation of Buddhist Meditation and American Culture.  This first attempt at an academic look at the rise of the mindfulness movement is a fascinating, provocative and often entertaining read,  but its cultural studies methodology can be questionable and its conclusions are sure to stick in the craw of those who value mindfulness for its secularism and scientific underpinnings.

The book is most valuable, I think, for its depiction of how mindfulness as we understand it in the 21st Century West came to be.  Wilson starts with tracing how the Pali term sati came to be translated as “mindfulness”  by the members of the Pali Text Society, a necessary precondition for making vipassana-style meditation appear to be central to the practice taught by Gotama in texts such as the Satipatthana Sutta (despite the fact that vipassana was not widely practiced by Asian Buddhists through much of history).  At the same time, Theravadin revivalist movements throughout East and Central Asia were beginning to teach this style of meditation,  so that when Americans and Europeans started traveling to Asia in search of alternative spirituality, teachers such as Ledi  Sayadaw and Mahasi Sayadaw were available to introduce it to them.   It was from this trajectory that books like Nyanaponika Thera’s The Heart of Buddhist Meditation and Walpola Rahula’s What the Buddha Taught emerged in the 1950s and 60s.   In these books, not only is mindfulness meditation placed at the center of Buddhist practice, it’s suitability for laypeople and its many physical and psychological benefits are expounded as well.

This is also the tradition of Theravada in which Joseph Goldstein, Jack Kornfeld, Sharon Salzberg , and the other founders of the Insight Meditation Society were trained.   IMS and institutions such as the Barre Center and Spirit Rock began teaching breath-centered vipassana to thousands of lay people, emphasizing the psychological aspects of Buddhism and de-emphasizing the more esoteric elements of Theravadin doctrine.   At the same time, Thich Nhat Hanh began teaching and writing widely in the west, also advocating the practice of mindfulness by laypeople and advising that it be used in such practical and informal applications as mindful eating and mindful relationships.

In a parallel process, Dr. Herbert Benson published a number of books in the 70s and 80s based on his research into both Transcendental Meditation and Tibetan Buddhist practices, popularizing what he called the ‘Relaxation Response’ and with it the idea that there was scientific evidence for the practical benefits of meditation. So when Jon Kabat-Zinn, while on a vipassana retreat at the Barre Center in 1979, conceived of the idea of a medicalized approach to mindfulness shorn of any Buddhist doctrine and presented as a treatment for disease, all the elements were in place for its acceptance and widespread dissemination, first through medical institutions and then American culture generally.

One of the controversial views Wilson espouses is that mindfulness is not, as many tend to think of it, a technique that has been “extracted” from Buddhism.   For Wilson, mindfulness, even in its flakiest pop-psychology manifestations, is Buddhism, although radically transformed through its contact with American culture.  In this, it is the latest in a series of “skillful means” by which the dharma has been presented in terms that speak to people in their unique cultural and historical contexts, a tradition that can be traced to Gotama and the Pali Nikayas.  Attempts to downplay or ignore the indebtedness of mindfulness to Buddhism are characterized by Wilson as “mystification,” a process he claims is necessary to remove Buddhist meditation practice from the province of priests and monastics and allow it to be appropriated by therapists, self-help authors and mainstream American laypeople.   But the mindfulness movement continues to draw upon the credibility of Buddhism’s ancient history as well as its ethical ideas and is, therefore, in Wilson’s view, a new American Buddhism.  And as the popularity of mindfulness ascends, traditional Buddhist institutions, even ones that have not practiced meditation themselves, have been transformed to correspond to it.

Wilson is fond of documenting the various colorful and sometimes bizarre manifestations of the mindfulness movement, from the scores of self-help books incorporating mindfulness to the pricy meditation gear in the Dharma Crafts catalog to One Taste, a proprietary form of masturbatory meditation for women. If there is a mindfulness book with “For Dummies” in the title, he will be sure to mention it. While these details make for entertaining reading, they also point to a weakness in Wilson’s methodology.    He often writes as if the mere existence of a mindfulness-related book or product implies that the item has a significant audience and impact on the mindfulness movement, typically without any attempt to indicate whether either of those assumptions is true.  As a result, in Wilson’s depiction, anything that calls itself mindfulness is representative of the mindfulness movement and can be extrapolated to characterize that movement as a whole.

So, for instance, a baffled response by a Shambala Sun reader to a letter to the editor criticizing the magazine’s liberal political bias is sufficient to demonstrate the blindness of the mindfulness movement to its own political slant.  An obscure book comparing mindfulness to American Transcendentalism proves that “Americans turn cultural touchstones such as Emerson, Throeau and William James into patriarchs of an imagined lineage of American mindfulness, making mindfulness nonthreatening and asserting their full rights to the tradition.”  The publication of mindful sex books indicates that “Typically, the new American mindful sex goals are better orgasm and conquering of conditions such as erectile disfunction, premature ejaculation, inhibition, and frigidity.”   In this way, Wilson can paint the mindfulness movement in broad, lurid strokes without ever feeling the need to demonstrate whether these views actually represent the beliefs or behavior of a significant number of people.

Wilson dwells at length on the economics of mindfulness, demonstrating the various forms of commodification the movement has produced.   This is not intended as a condemnation;  it is Wilson’s contention that offering practical benefits in exchange for economic support is how Buddhism has functioned in every society in which it has existed, and the selling of mindfulness in capitalist America is just the latest iteration of that process.

The problem, however, is that only the selling aspect is ever presented.   The application of mindfulness to everyday living becomes “a process of marketing mindfulness as a commodity in the American lifestyle economy.”  The development of mindfulness-based therapies for specific diseases demonstrates that “Because MBSR is so huge a phenomenon, it becomes necessary to develop niche-specific forms of MBSR to market at new pools of clients.”   The possibility that there are intentions at work here other than making a buck tends to disappear, as does the ubiquitous availability of non-commercial presentations of mindfulness.    From Wilson’s book, you would never guess that it is possible in America to learn mindfulness from accomplished teachers, practice it daily, and never spend a dime to do so.

The overgeneralizations and blind spots throughout Mindful America often make Wilson’s “mindfulness movement” seem more a reification than an identifiable phenomenon.   Can one “movement” encompass both the Dalai Lama and a product called Mindful Mayonaise?  Can MBSR and the “Tranquilistas,” a phenomenon incorporating mindfulness in a Sex in the City lifestyle, be usefully considered as expressions of the same movement?  One tends to think of a movement as being motivated by a core set of principles and goals.   What Wilson often seems to be documenting is less a movement than a meme, a loose collection of related ideas rather than a coherent cultural drive.

This can make the conclusions he draws from his survey difficult to accept, no more so than when he asserts that the mindfulness movement fits in American religious history as a form of “metaphysical religion”, following Christian Science, the New Thought movement, and other systems based on the idea that right thinking can produce physical healing.   Wilson feels that “there is ample evidence that the mindfulness movement as a whole can be considered part of the metaphysical strain in American religion, even when manifested in its most apparently secular or medical forms,” although the evidence he actually presents consists of one quote from Jon Kabat-Zinn and one from Thich Nhat Hahn.

But the fact that certain terms mindfulness proponents use can be mapped onto an academic definition of metaphysical religion does not in itself demonstrate equivalence between Kabat-Zinn and Mary Baker Eddy. Mindfulness proponents may believe that training the mind can promote healing, but they don’t believe that it does so because the physical universe is a manifestation of the mind of God. This is where Wilson’s cultural studies approach is of limited usefulness;  the popularity of mindfulness is the result of more than simply cultural dynamics.   There is a reason beyond mere marketing why many hospitals have MBSR programs while very few have departments of Christian Science.   Studying mindfulness as a cultural phenomenon exempts Wilson from addressing the questions of the actual effectiveness of mindfulness practice or how those effects are produced.   But if mindfulness is a scientifically demonstrated treatment modality, is it also a metaphysical religion?

Wilson notes that Mindful America is only a first step in what he hopes will be more widespread study of this phenomenon and its leading figures.   That  certainly would be a welcome development; I hope that future studies will move beyond a surface examination of cultural manifestations to consider whether mindfulness really has reached the status of a movement, what its defining principles might be, and whose lives it is affecting and how.  Addressing such questions in a rigorous way would help us understand the actual significance of mindfulness and  real extent of its impact on American life.

Despite its shortcomings, however, Mindful America is an important book for a number of reasons.  First, it inaugurates the social, cultural and economic study of modern American mindfulness as an academic discipline.  Beyond that, it clearly situates the mindfulness movement as an expression of the continuing evolution of Buddhism.  The history it relates is one that Secular Buddhists must know and embrace, because it demonstrates that secularism is a principle strategy by which Buddhism has impacted Western culture.  To engage in what Wilson calls “mystification” regarding this is to pretend, as the Mormons do, that the history of a movement is irrelevant to its present and its future.