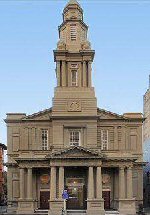 On Sunday 5 May 2013, progressive Christian churches worldwide were celebrating ‘Pluralism Sunday’. I was asked by the Minister of St Andrew’s on The Terrace here in Wellington, New Zealand, to talk about my ‘faith journey as a secular Buddhist’.

Unsure how to approach the issue of ‘faith’, I posted some questions on the blog at secularbuddhism.org.nz, asking people to help ‘crowdsource a sermon’.

The response was excellent, the discussion was good, and I received good advice and a number of lines which I included in the reflection I gave from the pulpit of the church. It went well, even receiving a round of applause, which was totally unexpected. So here it is, and I look forward to your comments.

••••
Thank you for welcoming me into your community. This is not a place where I would feel naturally at home, as I will explain, and I think you’ll find this interesting.

I last stood here in February to introduce Australian Buddhist teacher Winton Higgins when he was here in conversation with Lloyd Geering. And I remember thinking how odd it felt for me to be in a church. At the front, and speaking to people, and I said so at the time.

For years I would not go into a church. You’re looking at someone who, at the age of 16, went to Paris and walked straight past the cathedral of Notre Dame. One of the world’s most amazing buildings. I just did not feel comfortable going inside.

A little over ten years after that Paris trip, heading for the ski slopes of the Pyrenees, I got off the train at Lourdes. I was completely gobsmacked by the way that the vision of St. Bernadette had been commercialised.

The streets were lined with shops smelling of incense, selling tchotchkes, souvenirs. Plastic bottles in the shape of St. Bernadette filled with holy water. A cuckoo clock which had Jesus and Mary coming out on the hour. I kid you not. I remember it well. Lourdes seemed like a Christian version of Skegness, or Blackpool.

These poor, deluded people. That’s what I thought. I felt so superior. What I saw in Lourdes gave me permission to look down on Christians. At how they were suffering from such awful delusions. No longer was I fearful of churches. And I had good look around the cathedral.

You see, I come from a Jewish family. I’m old enough to remember my mishpocha, the whanau, the old folk, reminiscing about pogroms ‘back home’ in the Ukraine. How the goyim, the Christians, would come looking for Jews, to kill them.

We were different. That’s what I learnt. Our religion kept us separate from our neighbours.

I was brought up in a family which was culturally Jewish. But we weren’t strong believers. Few people in North London in the 1950s and ’60s were very religious. So what did it mean to be Jewish in North London back then?

Being Jewish meant lighting candles on a Friday night. Keeping a kosher household and, at the age of 13, my barmitzvah. The family got together and we celebrated. Oy, did we celebrate!

Being Jewish meant that three times a year my father went to shool. That’s the synagogue. He sat by himself, he knew no-one, he wasn’t part of the community. My mother never went. On Sunday mornings I was sent to cheder, Hebrew school but, I have to confess, I rarely got there.

Being Jewish meant watching American comedians on television. ‘Look!’ My mother would point at the screen. ‘He’s Jewish!’ ‘But mum,’ I’d say, ‘he’s not funny.’

What interested me – I was of the generation of 68 – were Jews with a social conscience, Jewish radicals. Their work, their books. People like Emma Goldman, Walter Benjamin, Rosa Luxemburg, Isaac Deutscher, Tony Cliff, Abram Leon, and of course Marx.

I was excited by the Yiddish speaking anarchists who were active in London’s East End at the start of the 20th century, supporting workers’ rights. Why? Because my parents were from the East End, and they were working class. These were my roots.

Zionism – no interest. And the Jewish religion? Peh, never held any interest for me whatsoever.

Now, by the time I’d reached 40, I was not only putting the world to rights, but I had set up a translation agency which worked into the languages of Britain’s non-English speaking minorities.

We’d translate from English into languages such as Bengali, Hindi, Gujarati, Punjabi and Urdu, Greek, Turkish, Amharic, Tigrinya, Vietnamese, Chinese. It was a fantastically interesting place to work, a cultural tower of Babel, and took up a huge amount of my time.

Without knowing it, I had become a workaholic. My relationship at the time was blown into smithereens. I decided to slow down, and look inwards. I started by seeing a therapist. Like the good Jewish boy that I was.

I began to examine the different religious traditions, particularly their contemplative aspects. But each time I thought I’d found something interesting, I would come up against a brick wall. The expectation to believe propositions that, frankly, were incredible.

All religions do this. New Age, Judaism, Islam, Christianity, Hinduism, Bahai. And, yes, Buddhism does this also.

Then I found a tradition which appeared to have a worthwhile practice, and which encouraged me to remain sceptical. It felt less harmful than the others. It was an Anglo-American form of Buddhism, insight meditation, which was started in the ’60s, and, so like many of the forms of Buddhism we see in the West, is actually a recent development.

The practice involves training in meditation and ethics. And it has a belief system which focuses on what are known as the Three Jewels (capital T, capital J) – the Buddha, the Dharma and the Sangha – the idea of the Buddha, the teachings of the Buddha and the community. The Four Noble Truths (capital capital F, capital N, capital T) and the Eightfold Path (capital E, capital P). This practice, it is hoped, will bring us to a gradual deepening into the realities and the enormous potential of the human condition. In a word, to awakening.

Sadly, I felt most insight meditation teachers – in New Zealand and overseas – appear never to have questioned the notion of previous and future lives. Whether there’s such a thing as karma which goes from life to life. They simply accept these propositions. After all, what they’re teaching is Buddhism. It’s par for the course. It comes with the territory. It’s a given! Some actively espouse these notions. And I was having real difficulty with this.

I read widely about Buddhism, subscribed to magazines, downloaded talks. Only occasionally would I feel satisfied with what I’d read, or listened to. Traditional Buddhist practices and beliefs, it seemed to me, were uncritically devout, simplistic and superstitious.

Why do so many people adopt arcane practices, cultural trappings and belief systems simply because they’ve been developed in Buddhist countries? I mean look at me! I’m not Tibetan. I’m not Thai. I’m not Chinese. I’m not Sri Lankan. I’m not Japanese. Neither am I Indian.

Much as I love these people, I am a north London secular Jew, living in 21st century Aotearoa New Zealand, who practices Buddhist meditation, and is married to a Kiwi from an Orthodox Christian family.

My need was for a coherent and a rigorous philosophy of life, along with a meditative practice which made an actual difference. I’m sorry, but promised rewards in a hypothetical future existence just don’t light my fires.

Nevertheless I organised meditation groups, I put out newsletters, I’ve set up websites. I worked hard to create a community of practicing insight meditators. Why? Because meditation really is the best gift I’ve ever given myself, and doing it on my own, I could feel that something was missing. Meditation awoke in me a sense of gratitude, generosity, and a visceral need to share what I’ve discovered.

However, despite being heavily involved in developing Buddhist community, if anyone asked, I would never, ever describe myself as a Buddhist. My answer was always ‘I come from a Jewish family and I practice Buddhist meditation’. You could say I was a closet Buddhist.

You see, until I had an answer to the issues surrounding rebirth, reincarnation, karma going from life to life, I was not happy describing myself as a Buddhist.

Then a book came my way. Buddhism Without Beliefs. I’d found a writer with whose ideas I felt comfortable. Stephen Batchelor wrote that he was agnostic on the religious truth claims of Asian Buddhism, and he made it clear he had no time for metaphysics.

He proposed a secular approach, grounded in meditation and mindfulness. Along with a historical understanding of the Buddha, seen through a modern lens. I could relate to this. Happily.

Over the years since this book came out – and it’s a best-seller – Batchelor’s thinking has developed. He now describes himself as a secular Buddhist. And I’m comfortable with this description also.

But enough about Stephen Batchelor. I was asked to tell you about my faith journey. I hope this morning I’ve given you an idea of how I’ve got to where I am today.

You may be wondering though – if in Buddhism there’s, no god, no metaphysical beliefs and no religious truth claims then what role, does faith have to play in a secular approach to the Buddha’s teachings?

One of the readings we just heard was a discourse between Siddhattha Gotama – the man we now know as the Buddha – and the Kalama people.

As a quick aside … the Buddha didn’t speak English, of course. What we heard was a translation of a text, that was written down 500 years after his death, in a language he didn’t speak. And by the way there are no capital letters in the Pali language.

So let me paraphrase part of his conclusions that we heard today. ‘Experience these practices for yourselves,’ he told the Kalamas, ‘try something out before you believe it to be true. Don’t take my word for it.’

Before we try something new we all need to have a little bit of faith, that through this effort we will learn something valuable. This is faith in ourselves. We trust our innate ability to sort out the right way to handle things rather than expecting a source outside us to provide. From this, we learn skills which we put to use to make wise decisions. The choices, however, are always our own.

We walk in the steps of those who have gone before us. Siddhattha Gotama, Jesus, the Johns – Calvin and Knox, our parents and loved ones, our teachers. But the reality is that we create our own path. More often than not we do so with others, in community.

A contemporary, secular approach to Buddhism involves the practices of meditation, reflection, dialogue, connecting through community, and concrete engaged action in the face of the cruelty and the suffering we see in the world. In so doing, we are developing a pragmatic programme for human flourishing which has no need of metaphysical beliefs and religious truth claims.

So as you reflect today, as you converse and engage with your friends at St Andrews on The Terrace, wherever you find yourself please remember this.

Posted in Articles
← The Four Noble TruthsListening to the Heart Sutra →