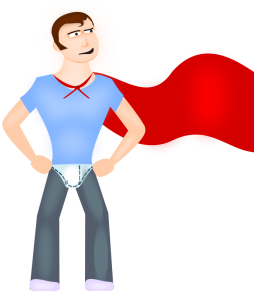 Sometimes, although not nearly as often as in later traditions, it seems as though the Buddha of the Nikāyas is a kind of superman. What do I mean? In a few passages it’s as though he did not consider himself entirely human. Some of this has to do with notions that the Buddha and his dhamma were not “scientific” or amenable to naturalization. After all, as I discussed in my last post, the Buddha does claim in the Mahāsīhanāda Sutta that,

… [S]hould anyone say of me: ‘The recluse Gotama does not have any superhuman states, any distinction in knowledge and vision worthy of the noble ones. The recluse Gotama teaches a Dhamma (merely) hammered out by reasoning, following his own line of inquiry as it occurs to him’ — unless he abandons that assertion and that state of mind and relinquishes that view, then as (surely as if he had been) carried off and put there he will wind up in hell.

That passage is one of the Gold Standards of a supernaturalist Buddha.

But let’s look at it a bit more closely. The Buddha wants to make two related claims: (1) that he has superhuman states, and (2) that he has a distinction in knowledge and vision that is worthy of the noble ones.

“Vision”, it is true, has Buddhist connotations that involve supposed supernatural abilities such as the “divine eye” that, it is said, allowed the Buddha to see past lives and other planes of existence. However more directly relevant to the dhamma, “vision” is an ability to directly witness the reality of impermanence, dukkha, and non-self. That is, the Buddha does not just say that the world is impermanent on the basis of indirect knowledge, but on the basis of vision, of seeing so first hand. His knowledge is therefore direct knowledge.

Which brings us to the first claim, that the Buddha has “superhuman states”. The Pāli words are “uttari manussa dhammā”, where “uttari” means “beyond”, and “manussa” means “human”. So the claim is that the Buddha has some “dhammas” which are beyond human, or more simply, superhuman. “Dhammas” in this context probably means “mental states” as in the Fourth Foundation of Mindfulness in the Satipaṭṭhāna Sutta, which looks at certain classes of mental phenomena.

So it would appear that the Buddha is claiming that he has mental states that are not shared by other humans: that he is special and perhaps unique. This is how I think Donald Lopez would take the claim. As he says, “The Buddha described in the sutras is more a figure of science fiction than science.” The Buddha is more akin to a cartoon Superman than to an ordinary human being.

There is material in the suttas that supports Lopez’s contention. The Buddha does, after all, make plenty of claims about a number of supernatural abilities.

But what of these “uttari manussa dhammā”? In this regard it may be interesting to look at the Cūḷagosinga Sutta, Majjhima Nikāya 31. There the Buddha questions Anuruddha, Nandiya, and Kimbila, three disciples keeping meditative seclusion in the Gosinga forest. He asks them:

… [W]hile you abide thus diligent, ardent, and resolute, have you attained any superhuman state [uttari manussa dhammā], a distinction in knowledge and vision worthy of the noble ones, a comfortable abiding? (10)

The Pāli here is the same as we saw in the Buddha’s assertion in the Mahāsīhanāda Sutta, the only addition being that the Buddha asks if these states are also “a comfortable abiding.”

In response Anuruddha says that they have attained such a state: they have achieved the first jhāna.

Then the Buddha asks if they have achieved any other superhuman state, distinction in knowledge and vision worthy of the noble ones, comfortable abiding, that “surmounts” the last.

Then the Buddha’s questioning ends.

There are three points to make about this passage. First, the Buddha takes all of these jhānic states to be examples of “superhuman states, distinctions in knowledge and vision worthy of the noble ones.” He does not respond to Anuruddha by saying that those sorts of attainments did not qualify. Instead his response to each of them is, “Good, good”. (“Sādhu sādhu”).

Second, none of these states need be understood as involving anything supernatural in a contemporary, scientific sense, much as they may have connoted planes of existence in early Buddhist thought. First and foremost they are deep states of meditative absorption. They are unusual states, “beyond” (uttari) or apart from normal states of consciousness; one might call them “altered”. They are “superhuman” in the sense of being out of the ordinary, and superior in certain respects of focus, calm, and so on. Of course in a Buddhist context these are states that can be used to sharpen the mind towards the attainment of wisdom, so to that end they are also “worthy of the noble ones”.

Third, when asked by the Buddha about which such states they have attained, Anuruddha does not list any of what we, by modern standards, would consider literally “superhuman states”; he makes no mention of the traditional “iddhis” such as the ability to see past lives, to witness kammic causation, to fly through the air, or to walk on water.

This does not mean that iddhis wouldn’t have qualified as “uttari manussa dhammā”. Nor does it mean that the Buddha — or Anuruddha — were scientific naturalists. What it does mean is that contemporary notions of supernaturalism cut across various similar concepts in the Nikāyas. It is not enough to say that because the Buddha claimed to have “superhuman states”, it means that he did not believe himself to be fully human, nor that therefore he viewed himself in a supernatural light. After all, on the basis of this sutta, Anuruddha, Nandiya, Kimbala, and indeed all contemporary accomplished practitioners of jhāna would also have been considered by the Buddha to have “superhuman states, distinctions in knowledge and vision worthy of the noble ones”. Surely to that extent they are somewhat different from ordinary humans, but that can be said of many of us to one degree or another.

In conclusion, the back and forth we see between the Buddha and his disciples in the Cūḷagosinga Sutta demonstrates that the Buddha’s notion of being “superhuman” does not match very closely at all with contemporary notions of the supernatural. It means something more like “out of the ordinary” or “exceptional”.

And now perhaps we can see a bit more clearly as to why the Buddha might have made the hyperbolic statement quoted above from the Mahāsīhanāda Sutta. He wasn’t claiming to be a Superman. Instead he was claiming — and it was central to his position as “awakened” that this be so — that he was exceptional in being able to reach states of absorption deep and focused enough to allow him to see directly the truth of anicca, dukkha, anatta. That’s what concerned him most: to establish that his “knowledge and vision” came from a kind of mental focus which was out of the ordinary. It did not simply come to him through an ordinary line of reasoned supposition.

Nowadays, of course, we are a little more skeptical about claims of “knowledge and vision” since we have seen them made erroneously all too often. (Just as lines of reasoned supposition may be). We need something more objectively verifiable, and there are suttas where the Buddha agrees that a certain degree of skepticism is warranted until we see the entire picture for ourselves. While this doesn’t eliminate the fact that the Buddha had a robust supernaturalist philosophy, it also establishes that much of what is central to the dhamma — including claims of “superhuman states, distinctions of knowledge and vision worthy of the noble ones” — can be upheld without recourse to it.

Posted in Articles and tagged Pali canon
← Two Sides to the Lion's RoarEpisode 183 :: Toni Bernhard :: How to Wake Up: A Buddhist-Inspired Guide to Navigating Joy and Sorrow →