Several people have asked that I keep them posted about the Secular Dharma seminar with Stephen and Martine Batchelor, so I’ll be posting here on the blog as time, connectivity, and silence permit.  The blog entries say “Semitreat” as the combination of it being somewhere between a seminar and a retreat, a term Stephen used in the introductory chat the first evening.  But for simplicity’s sake, I’ll just call it a retreat from here on out.

Authors.  They have a way with words, as it turns out.

First, a little background is in order.  Last year about this time, Andy Olendzki led a week long seminar in Iowa on Buddhist Ethics in conjunction with Mark Nunberg of Common Ground Meditation Center in Minneapolis.  Though I’d known of his work through his book, Unlimiting Mind, I was not aware of how deeply Andy is committed to teaching, and how in-depth his knowledge of the dhamma really is.  That seminar was wonderfully educational, and piqued my interest in BCBS, so I signed up to receive their class listing.  Two catalogues later had an entry which caught my eye: Secular Dharma with Stephen and Martine Batchelor.  Of course I signed up online that very moment. 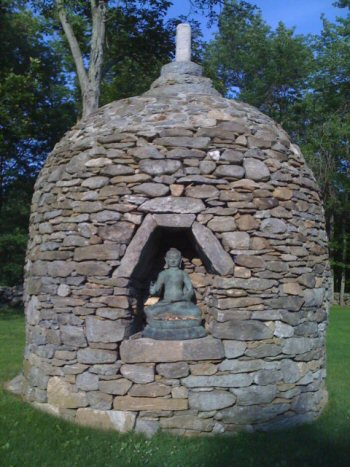 This retreat is being held at Barre Center for Buddhist Studies, just down the road from Insight Meditation Society.  It’s my first time here, so the entire experience is fresh and new.  And as you can see by these pics, the site itself is breathtakingly beautiful.  We’ve been fortunate in that the weather has been extremely kind to us as well, as it’s been sunny and warm every day so far.  I arrived a day early to have a little time to settle in, and get to know Glen and Kristy a little bit, meet Maggie, and be delighted to learn that the cook Steve is the same one I’ve known for years from Bhavana Society in West Virginia.

That cinched it, we would be retreat food ticks by the end of the week, Steve’s talents in the kitchen are legendary, and that still doesn’t cover how well he takes care of us.  Also, eat dessert first, impermanence is everywhere.

After wandering about in the facility library, which is obscenely extensive (it’s taken a great deal of “letting go” practice to just browse), I took a walk off the grounds along the dirt road.  Wonderfully woodsy, passed other folks who I think may be staying at the Forest Retreat center.  Met a couple of very sweet dogs along the way, of course pulling my heart-strings a bit, as I’ve never been gone from my dog Pogo for this long.

The next day, other attendees started to arrive.  I’d been looking forward to this particular part of the adventure for some time, as it would be my first opportunity to meet in person several people I’ve been honored to get to know and speak with since starting the podcast.  Stanford Forrester was the first to arrive of those I knew, and in an unexpected bonus, his lovely wife and children were along to get a tour as well.  Then my fellow Minnesotan, founder of the Rochester Meditation Center, Doug McGill, was found awaiting registration.  The third familiar name, now put to a face, was another Stan — Pengally, whom many of you will recognize from the FaceBook Fan Page.

There’s actually a third Stan here, too.  It’s usually a Dave or three, isn’t it?

And finally, my dear friend and fellow Second Life discussion buddy, Ron Stillman, is also here.  To see so many good friends, kalyana mittas, in one place, was unexpectedly overwhelming, and I had to retreat from the retreat for a bit in my room.  I was quite literally tearing up with an overabundance of happiness at seeing them.

So those who are here, noticing that I’m smiling all the time, it’s your own darn fault. 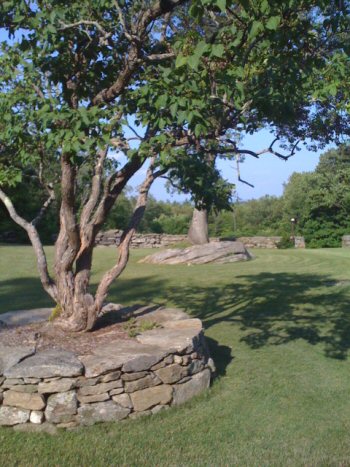 After a bit of socializing, longful “book looks” in the library, and a light and awesome salad dinner, the introductory talk was held in the dhamma hall.  If you are familiar with BCBS, we’re not having the discussions in the classroom in the Farm.  The schedule has… (counting)… six different chunks of meditation throughout the day, so it just made more sense to have it there.  The opening comments were about what we mean by “secular”, which I’m pleased to report resonated quite handily with the first post in this blog, and all the participants sharing a bit about their background and why they’re here.

Several people brought up the Integrated Studies Program, and how terrific it is.  Which is good to hear, as one of *my* reasons for coming is to plead with Andy to… oh, I’ve got it!  “Have compassion” (there we go!) for those of us who would like to participate, but just can’t take three weeks off work in the same year.

Please meditate on Andy seeing that splitting it into two weeks one year, and two weeks another year, would be of benefit to all sentient beings.