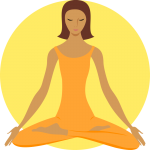 As Ted Meissner and Mark Knickelbine have been emphasizing, practice is an essential part of any Secular Buddhist path. But it took me quite awhile to find my way to a really worthwhile practice. For many years I followed a Zen-based form of what I would term ‘free form’ meditation, oriented around samādhi, or focus on the breath. The main practice issues I dealt with were questions like, should I count up from one to ten? Should I count on the out-breath only, or on both in- and out-breath? Should I internally say to myself, “Breathing in, breathing out”? Or should I follow the breath ‘non-conceptually’, without internal comment?

One of my earliest Zen teachers, from Robert Aitken’s Diamond Sangha, recommended noting thoughts as they arose, as a technique for getting them to cease bothering. The approach was a form of just sitting; non-judgmental focus on the simple act of sitting and breathing. Thoughts were not so much tools to use or data to investigate, as obstacles to overcome.

I think my approach was pretty close to how many secular practitioners enter practice. For example, a recent article in the Financial Times about the growing impact of meditation in the workplace has a good, basic description:

Practitioners sit in a comfortable position, close their eyes and simply notice the physical sensations in their body and the swirling thoughts in their brain. Using moment-to-moment, non-judgmental awareness, the aim is to observe these sensations without reacting to them. By doing so, meditators gradually recognise the fleeting nature of sensations, including pain, anger and frustration. In time, this allows practitioners to quiet the mind.

Had I read that article several years ago, I would have recognized virtually my entire practice: to observe sensations, particularly the sensation of the breath, moment-to-moment, non-judgmentally, in order to cease thoughts from troubling. Indeed, as the article suggests, I found that doing so over a period of time did seem to quiet and focus my mind.

Limitations and the Guru

Over time the approach seemed limited. It became something of a cul-de-sac, as I think it could particularly for someone practicing without a teacher or sangha.

To try to overcome this, I sat in various groups or centers in Princeton, Madison and New York. I had a long preference for Zen, based on its simple, relatively secular approach. The good thing about Zen is that it’s generally pretty loose about doctrine, and members tend not to proselytize even within the group, so I could feel relatively comfortable there. And I find their spare aesthetic to be inspirational.

However, as Mark Knickelbine noted in his recent SBA podcast on the Practice Circle, Zen practice, while beautiful, in fact is also quite religious. It has its hierarchies, its robes, its bowing and prostrations, its bells and incense, its chanting of untranslated Japanese or unintelligible syllables. The Zen liturgy lends it an obscure, hermetic feel that for some no doubt has a spiritual component. I could make my peace with some of it, and even found some attractive, but ultimately it wasn’t what I was looking for.

Zen practitioners will say that these are mere appearances. For one who could overcome the appearances, a way around the cul-de-sac of individual practice on the breath would be to undertake a guru/student relationship with a Sensei at a Zen (or other Buddhist) center, and have him or her guide one’s progress along the path. This is not something I am comfortable with, however.

While there are people who are more advanced in practice and the dharma than I, I remain secular in my outlook on learning. I don’t mind having a Bhikkhu or Sensei as a teacher in a scholarly setting, but practice is another matter. Basically, I am uncomfortable about supposed “religious authority”, and therefore about having someone as a long-term religious guru. And that goes doubly with something esoteric like Kōan Practice (a hallmark of Japanese Rinzai Zen) where it isn’t even clear what one is doing or why one is doing it. Much has to be taken on blind faith, something which I find rationally and even ethically problematic.

But this approach left me stuck for several years in a practice that, while worthwhile, seemed limited. It wasn’t until I decided to give the Pāli Canon another look, thanks in part to Stephen Batchelor, that things began to change.

In fact, the Canon is full of good, useful material for guiding practice. Arguably the single most influential sutta on meditation is the Satipaṭṭhāna Sutta (Majjhima Nikāya 10, also Dīgha Nikāya 22). I believe it’s the only sutta included in substantially the same form in two Nikāyas. It begins with a description of the very kind of meditation with which I was intimately familiar: meditation on the breath. But that is only the start. The sutta then outlines dozens of different meditative subjects, in four major categories.

The upshot? Although meditating on the breath is perhaps the classic meditative technique, it is not the be-all and end-all of meditation. The point of meditation is insight, not calming the mind. Calming the mind is only a strategy towards gaining insight.

Insight into what? Into the mind’s relation to the body; into mental habits that hinder one’s meditative progress; into one’s likes and dislikes; into one’s perceptions, volitions, consciousness; into the transitory and selfless nature of all phenomena; into states that bring a more lasting sense of equanimity and contentment.

This expansion of my practice took it out of the cul-de-sac, and helped integrate it into a larger schema based on the Eightfold Path. Looked at from a more specifically Buddhist perspective, an approach based solely around non-judgmental awareness of the breath amounts to only one of the eight “folds”. At least as I practiced it, it was a form of “right concentration”.

It has also helped to have found groups of like-minded practitioners, both in the SBA and in a local, relatively secular, insight-based sangha in New York.

First, I’ve found that the path is neither quick nor easy. It’s not the sort of undertaking one can do in a short period of time, or without dedicated, regular effort. Like exercise, it must be done diligently for the effects to be realized. Going to the gym once a week is only liable to produce injury. Similarly, meditating irregularly tends to frustrate.

Second, it’s not just a trackless or non-conceptual path of simply sitting and following the breath. There are cognitive strategies and techniques one should use. The Buddha called “investigation-of-phenomena” (dhamma vicaya) one of the seven factors that bring about enlightenment. A practitioner is supposed to analyze experiences into categories such as perception and feeling, feeling and volition, wholesome and unwholesome, in order to understand how they arise, what they bring about, and how they pass away. This is an active, conceptual process.

Third, some practitioners mistake the non-judgmental approach of mindfulness with a notion that no mental states are to be preferred over other mental states, or that no actions are to be preferred over other actions. Not so. By pre-judging or judging too quickly one risks suppressing the very states one needs to be aware of in order to deal with skillfully. The point of non-judgmental awareness is to enter into the mindset of an objective, empirical observer. But once those states have arisen, one should investigate them, distinguishing those which are wholesome from those which are not. One should work to eliminate the unwholesome.

For example, during meditation one notes non-judgmentally that the sound of a drill outside causes annoyance to arise. But mere noting is is not yet insight, and it changes nothing. To work towards insight, one must distinguish the sound itself from one’s reaction towards the sound. Isolating the ill-will that arises from the sound which itself is neither good nor bad, one knows where to work. For ill-will is a hindrance to meditation. It’s an unskillful mental state. Noticing its arising, knowing it as unskillful, knowing how to counter it, one can put to work various strategies, such as metta meditation.

The whole is a complex cognitive process that is not captured in any simple notion of “non-judgmental awareness of the breath”. So let’s be careful not to limit our practice solely to that technique.

Towards a Useful Secular Buddhist Practice

We’re dealing with Secular Buddhist practice here on the SBA site nowadays. There’s an awful lot that a secular practitioner can do on their own. Even a very simple mindfulness practice, like that described in the Financial Times article, can do stressed employees a world of good. But there are also some subtle pitfalls we should keep an eye out for. A practice that is too narrowly focused risks sterility. What’s needed is something with the breadth and depth to take on a variety of life issues.

A truly engaged secular Buddhist practice should be much more than stress relief. Community and expert guidance, of course, are irreplaceable, but the SBA’s Practice Circle aside, it can be difficult to find something that fits. I would suggest that even those who cannot find a sangha they find welcoming or convenient should nonetheless strive to expand their practice along the lines the Buddha suggested in the early suttas — paring away the unnecessary, of course. We don’t need to include past life regression!

Remember that the path is gradual, and that you should always be able to understand what it is you are doing and why.