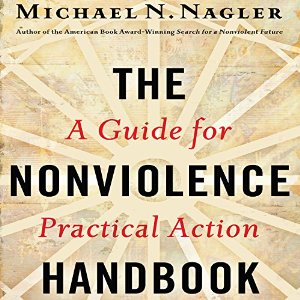 Buy at Amazon or Audible 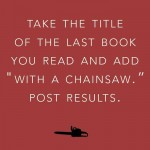 Jokes aside, for those who have not looked at the details of what “nonviolence” (comparable to Sanskrit: “ahimsa”) can be and how it can be lived / its techniques applied on both the grand and interpersonal scales, this guide is incredibly thorough in relatively few pages. For those who have already read some of Nagler’s other works (including his Metta Center for Nonviolence website), you’ll find that the book tends to just repeat what Nagler already says for free (which isn’t necessarily a bad thing).

After a general overview, Nagler describes the importance of having “Right Intention” and “Right Means” when aiming to engage in nonviolent direct action. Being among those who have previously read his website, I was surprised to hear such “Buddhism-evoking” terminology. When I last looked at Nagler’s work, aside from having “metta” in the name of his nonprofit, there was not much direct reference to any kind of Buddhism. Now, however, there seems to not just be terminology and symbols on his website (e.g. there’s now an image of Gautama Buddha on the landing page), but a deeper integration of seminal Buddhist ideas in his conceptions of nonviolent action.

“Right Intention” includes recognizing the interconnectedness (i.e. dependent arising) and fundamental “sameness” (which can be evoked through the concept of sunyata) of all people and using this as a logical springboard into minimizing harm to all involved in a conflict (i.e. the First Precept) by the respecting of everyone’s humanity and pride in a conflict (including yourself and your enemies). It also includes various suggestions on how to develop mind states and habits that encourage such an outlook. While he mentions “avoiding all media,” which I don’t think is necessary and I honestly kind of roll my eyes at, he also mentions – you guessed it – meditation, which he emphasizes need not be religious. He does not mention “metta meditation” by name, but it’s clear that that specific style of meditation would encourage his “Right Intention” and he knows that enough to even add “metta” to the name of his nonprofit.

“Right Means” seems to be a longer (and less systematic, in my honest opinion) statement of his Six Principles of Nonviolence:

For those who aren’t familiar with the term/ philosophy of Satyagraha, and especially for those who forget about or neglect the element of constructive program (basically building a better replacement for whatever structure you are fighting so that there’s not a vacuum of services after success), this section will be extremely thought-provoking and transformative.

Next (and also throughout) he addresses some common questions or concerns about nonviolence:

Overall, I think he does an excellent job of addressing these questions (using real life examples), and I feel that I learned a thing or two despite being already familiar with this topic and Nagler’s thoughts on it. I did think of (and was, unfortunately, left with) one question that I invite anyone reading this to weigh in on in the comments:

[paraphrasing] “People engaging in nonviolent direct action should prepare themselves for some dukkha and even to die for their cause. However, what should one do when it’s not one’s own life that is threatened, but that of a loved one? Is it even ethical to risk the suffering and life of another without their consent?”

The book wraps up by emphasizing that it is best / most effective to control your anger or channel it into nonviolent direct action instead of just screaming as much as you can no matter what (a complaint I often have about online-only activists). Also, nonviolence should be a lifestyle and not just a set of tactics (which is very in line with Buddhist thinking). Finally, there is also a whole chapter of just quotable quotes from the book (and to be fair, there are many) and information on Nagler’s background (which is pretty impressive).

Again, the book is extremely thought-provoking and informative in relatively few pages. It is not just some outline of philosophy – it is a guide on actual practical action (living up to its subtitle). While it does tend to focus on “grand movements,” it’s noteworthy that many of the ideas and practices it covers can apply to interpersonal conflicts. I have used these practices for some of my own personal struggles with great success (and recently gotten so reactive that I didn’t use them for this one conflict and ended up regretting how hurtfully I responded), so I can personally vouch for their real-world effectiveness. While it does kind of rehash ideas that can be found on Nagler’s website and while Nagler does sometimes come off as “New Age-y” or even “cult-ish” (e.g. the “cut yourself off from the media” bit), overall, this book is still worth getting and surprisingly not only in line with general Buddhist principles, but supportive of Secular Buddhist principles and practices. (As a matter of fact, I was genuinely surprised at how much this book relates specifically to Secular Buddhism, and it inspired me to write this review for SBA.) Anyone who is interested in potential (Secular) Buddhist ethics, conflict resolution, nonviolent communication, forgiveness, or just in a topic that they haven’t explored much – will get a lot out of this book. Even if none of those categories apply to you, there’s still many new ways of thinking presented, so that anyone can get something out of The Nonviolence Handbook: A Guide for Practical Action. Buy it today (or read 75% of it at the Metta Center for Nonviolence website, lol~!)