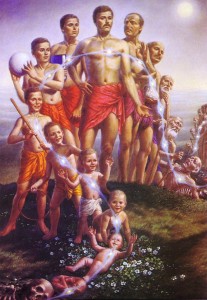 In my review of Thanissaro Bhikkhu’s book on rebirth, I observed that there is a contradiction at the heart of traditional Theravadin orthodoxy regarding the goal of practice.  In some of the Pali suttas, we encounter a Gotama who avoids and discourages metaphysical speculation, is ambiguous about the afterlife, and who emphasizes practice to gain insight and awakening in this life.   In others, Gotama is explicitly teaching that the goal of practice is to escape the cycle of birth and death and describing nibbana as leading to the cessation of becoming.   Although the Theravadin commentarial tradition attempts to elide this contradiction, I think an unbiased reading cannot avoid the heteroglossic nature of the Nikayas,  which is evidence at minimum of competition and conflict between doctrines in the creation of the Pali texts.

At the suggestion of Andrew Kennedy at the Secular Buddhism UK website, I just finished reading a fascinating book that explores this contradiction in detail.  In Desire, Death, and Goodness: The Conflict of Ultimate Values in Theravada Buddhism, theology professor Grace Burford takes a look at one of the oldest of the Pali texts, the Atthakavagga, which is the fourth section of the Sutta Nipata.  Besides being written in the simple, pericope-free style of the earliest texts, it is also quoted in other suttas, and there is a commentary on it that is considered by the Theravadins to have been written by Sariputta himself.  Burford’s project is to look at the values expressed in the Atthakavagga itself and compare them to the values expressed in both this canonical commentary, the Mahaniddesa, and in Buddhaghosa’s commentary included in his Paramatthajotika II.  What she discovers is a fundamental doctrinal shift that results in radical inconsistencies in Theravadin orthodoxy.

In the Atthakavagga itself, Burford finds a value system that is practical, accessible, and free of metaphysical claims:

“Rather than a victory over death or an escape from this or future lives or from worldly existence, the ideal goal according to the Atthakavagga is primarily an unselfish, non-desirous way of living in the world.  It represents a transformation of values within human existence, rather than a transformation of values that also has metaphysical consequences beyond the scope of human existence.”

Burford notices that there are no references to the round of birth and death, samsara, in the Atthakavagga. Instead there is an acceptance of death and admonitions to release craving for either existence or non-existence:

Having understood perception, having crossed over the flood

The silent one does not cling to acquisitions;

He does not long for this world or the other.

“This implies that the ideal is something consonant with the individual’s continued survival among the things of this world/existence,” Burford writes. “The difference between less-than-ideal and ideal life in this world is simply that the desireless person is no longer attached to anything or anyone.”

In the two commentaries, however, a very different value system presents itself:

“The commentators, reflecting the authoritative Theravada doctrines of their day, superimpose on this simple, coherent understanding of the ideal a scheme of cosmological complexity and metaphysical hierarchies.  In this view, the goal is defined as both the perfection of virtue-wisdom-compassion and the escape from continued existence in samsara. The commentators treat both of these ways of characterizing the goal as equally significant.”

In imposing with their commentaries a set of values that are inconsistent with those expressed by the original text, Burford argues, the commentators introduce an irreconcilable contradiction:

“The two components of the commentators’ conception of the ideal derive from divergent values and cannot be combined without contradiction.  The perfection of virtue-wisdom-compassion is a this-worldly, life affirming, positive ideal.  The escape from samsara and the cessation of kamma, birth, sickness, death and continued becoming is a world-denying, negative, transcendent ideal. Since perfection of virtue-wisdom-compassion can only be manifested in one who is still alive, and escape from samsara can only be manifested in one who no longer continues to become, the combination of the two in one definition of the highest human good is both theoretically contradictory and impossible in practice.”

One of the ways this contradiction plays itself out is in its implications for practice.  In Theravadin orthodoxy, escape from samsara requires the stilling of all karmic creation.  However, for the unawakened person, all action creates karma, even positive ones like acts of generosity and compassion.  Good actions can win one better rebirths, perhaps even in heavenly realms.  But, because heavenly beings live so long and suffer so little, it’s nearly impossible for them to achieve nibbana, and they return to lower existences when their good karma is exhausted.  So good actions one might take in one’s present human life, such as practicing the cultivation of compassion, might actually doom one’s chances to achieve nibbana.  Practical impossibilities of this kind arise, Burford notes, from holding two conflicting ideals as consistent and equally good.

Another discrepancy Burford points out is the ontological status of the arahant.  The attainment of nibbana, in the definition of Theravadin orthodoxy, means that one has ceased to fuel future becoming.  And yet one still lives – in the case of the Buddha, for 45 years – until one’s complete unbinding at death.  For the arahant, the attainment of nibbana is the ultimate – but not quite.  He or she is still engaged with the aggregates, which by classical definition are productive of clinging.  Theravada tries to resolve this by claiming that, although the arahant is no longer producing karmic effects, he or she must still use up the karma that remains from their previous unenlightened existence.  Burford points out that Theravada shares this solution with two schools of Vedanta that taught the same thing.

One might expect the foundational figure in Theravadin orthodoxy, Buddhaghosa, to attempt to force-fit the Atthakavagga into the complex soteriological formula Theravada had developed by the fifth century CE.  What is fascinating to me is that Burford documents this same process in the Mahaniddesa, which Theravada holds to be canonical.  This means that, at the time when at least some of the Nikayas were probably also being composed, a commentator found himself having to add ideas about rebirth to a text in which they are almost entirely absent.  As I argued in my article about stylistic evolution in the Nikayas, it appears that the primary allegiance of the authors of the later suttas was not to any original source material, but to what they felt the texts ought to say.  What Burford has captured here, albeit in a commentary rather than a sutta, is this process in action: an attempt to revise the interpretation of an earlier text in terms of what the commentator felt the text should convey, namely the metaphysics of rebirth.

Burford writes in an academic context, but her observations fuel a controversy that we secular dharma practitioners are familiar with.  Did Gotama teach rebirth as central to the path?  Or was the centrality of karma and rebirth a later development?  Given that, as Burford shows, contradictions within the Atthakavagga itself suggest that it may be a conflation of two earlier texts, we must avoid the temptation to see the Atthakavagga as a pristine record of Gotama’s original teachings.  At minimum, however, Burford demonstrates an example of the editorial process wherein escape from samsara became the central feature of nibbana and the primary goal of practice.  She also shows that this process led to a religious doctrine that is internally inconsistent and at conflict with itself.  Just as the Mahaniddesa commentator and Buddhaghosa chose to emphasize the rebirth doctrine in their interpretation of early Pali texts,  we must also choose which of the conflicting voices in the Nikayas we will concentrate on.   I choose to listen to this voice:

You yearn for no extreme:

You’ve investigated everything you’ve clung to

and need not cling to anything