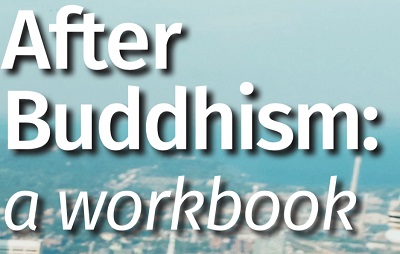 The following article is from Ramsey Margolis of Secular Buddhism New Zealand.

Towards the end of 2014, Stephen Batchelor sent proofs of his unpublished book After Buddhism: Rethinking the Dharma for a Secular Age to Winton Higgins, a secular Buddhist teacher in Sydney, Australia, asking him to critically examine the text. Having provided the required critique, and as someone who had spent most of his working life as an academic and a university lecturer, Winton let Stephen Batchelor know that he felt the book would make a good focus for study by those wanting to deepen their understanding of secular Buddhism.

When it comes to Buddhist teachers, Winton’s name is not well known outside his home city. He has, though, been a practitioner since 1987, and a teacher of insight meditation since 1995. Winton has also contributed to the development of secular Buddhism internationally, and is a senior teacher for Sydney Insight Meditators and Secular Buddhism in Aotearoa New Zealand. Ted Meissner interviewed Winton for his podcast in April 2011 and then again in November 2014. You can find their conversations here.

As he was writing them, Winton’s talks floated one by one across the Tasman Sea to New Zealand where they were printed and made available to members of One Mindful Breath, Wellington’s secular Buddhist community, at our Wednesday evening sessions. A lot of people were finding After Buddhism quite a challenge, this was clear. Building on the two very successful pedagogical exercises in Sydney, though, we believe that the talks Winton gave will help other people – both individually and in community – work their way through After Buddhism and discover what a secular Buddhism means to them.

Going through the talks and editing them to be more appropriate for a reader them than a listener, I felt something was missing. If this is going to be a ‘workbook’, helping me work my way through After Buddhism, which is at times a difficult read, what – I wondered – would would make it easier? And having not had the opportunity to sit in on the discussions in Sydney, what would I have missed? My answer: the questions that arose, and the conversations around the talks and Stephen’s book.

Jim Champion is a secular Buddhist in Southampton on the south coast of England. A physics teacher, he’s a member of the Middle Way Society and a contributor to secularbuddhism.org.nz. A secondary school teacher who teaches Physics, Jim eagerly agreed to read his way through After Buddhism, devising a series of useful and often amusing questions which we went through and with additional questions that arose from the study groups in Sydney gladly added at end of each chapter.

Now there was a more or less complete manuscript, we needed an imprint under which to publish it.

Let’s wind the clock back to January 2017. I had worked through the process of helping Leon Frampton, a dharma friend in Invercargill in the deep south of New Zealand’s South Island, look for a name for a counselling endeavor he was considering setting up. With Viktor Frankl’s notion of discovering meaning at the centre of what he was wanting to offer I suggested that a word in te reo Maori – ‘tuwhiri’ – might work well for him. Looking at the English translation of the word, we understand it as:

– firstly, a verb meaning to disclose, reveal, divulge, make known; and
– secondly, a noun meaning a clue, means of discovering or disclosing something lost or hidden, hint, tip, pointer

With this in mind, I suggested Leon might call his enterprise ‘The Tuwhiri Centre’. As it happens, he decided not to proceed with it after he took a full-time role running a health centre. Early this year, when the conversation around what to call a publishing imprint that would serve as an educational resource for secular Buddhists was taking place, Leon very generously gifted the name ‘Tuwhiri’ to the endeavour.

In this way, The Tuwhiri Project was born. Running The Tuwhiri Project now you will find Pete Cowley and myself, Ramsey Margolis, from One Mindful Breath with Margaret Tung and Winton Higgins from Sydney, Australia’s new secular Buddhist Kookaburra Sangha.

It has been registered as a limited liability company that is wholly owned by Aotearoa Buddhist Education Trust, a New Zealand registered charity. Without investor owners wanting a dividend at the end of each year, Tuwhiri will operate like a social enterprise on a profit-conscious rather than a profit-maximising basis, helping people find meaning in a difficult world.

This request is to be found at the end of a short video on the Kickstarter page for After Buddhism: a workbook. It’s from Buddhist practitioners and teachers from around the world, some of whom you may have heard of—Martine Batchelor (France), Anna Markey (Australia), Bernd Kaponig (Austria), Linda Modaro (USA), and Stephen Batchelor (France).

The Tuwhiri Project is asking for help to produce, After Buddhism: a workbook. And let’s face it, we’re also wanting to pre-sell books before publishing, so we know how many to print.

Just as we recognize that there are many Buddhisms, so there is not one “secular Buddhism’’ and those who wish we could only just agree on what secular Buddhism really is will remain perplexed about this as long as they continue to seek certainty.

After Buddhism: a workbook will not be to everyone’s taste. However, if like me you’ve read After Buddhism: Rethinking the Dharma for a Secular Age and found it daunting, then this workbook will stimulate your grey matter as it did mine and get your critical thought processes going.

The Kickstarter ends on July 11, 2018 and the book will be published on August 6th, 2018. Is this project something you might offer your support?

Posted in Articles
← Do We Need Attachment to be Kind?7/8 Practice Circle: A Compassionate Friend →