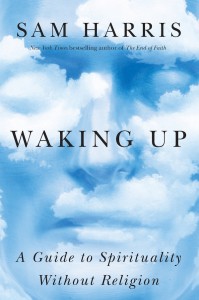 I still remember my excitement on encountering, in Sam Harris’ first book, The End of Faith, the suggestion that it would be possible to enjoy many of the benefits which people had traditionally sought from religion without the need to embrace religion itself.  Buddhist meditiation was one of the practices Harris mentioned as a specific example of wisdom that could be extracted from its religious context.  “I wonder if anybody is actually doing anything like that?” I remember asking myself. The result was a search that led me first to MBSR, and then to Stephen Batchelor’s Buddhism Without Beliefs. In a very real way, Sam Harris is responsible for guiding my feet to the path, and for the transformations I have experienced while traveling it.

If Harris had published a book back then with the subtitle, “A Guide to Spirituality Without Religion,” I would have grabbed it eagerly.  I suspect that many people in a similar situation today will rush to read Waking Up.  However, while the book contains much that will interest those who wish to explore the dimensions of a non-faith-based spiritual practice, I’m afraid many readers will be disappointed.    Aside from a few brief meditation instructions, Waking Up is less of an actual guide to seeking peace, wisdom, transcendence and a ground of ethical behavior outside of religion than it is an argument that such a practice is rationally acceptable and, therefore, a good thing.  In many sections of the book, rather than guiding us to the path, Harris seems principally concerned with convincing the skeptical that a Buddhist-inflected search for awakening is not just more religious delusion.

Perhaps this theme mirrors a conversation Harris must have had with himself many times over the years he spent training with various sayadaws, yogis and rimpoches.  Harris portrays himself as deeply immersed in traditional Buddhism, and even in Advaita Vedanta.  He was also, apparently, an avid consumer of hallucinogens, at least until the bad trips started outnumbering the good.  Harris recounts times at which he had to remind himself that the strange and marvelous experiences he was having were not evidence for the veracity of the religious doctrine he was surrounded by, nor proof of a supernatural realm.  Consequently, he seems to assume readers will resist the idea that spiritual practice need not be enmeshed in religious belief, and he piles the evidence so high that there’s not much room left to discuss how the secular seeker should actually proceed.

That evidence makes an interesting and entertaining read, although much of it will not be new to those who already follow the philosophy and neuroscience of human consciousness.   The spiritual principles Harris expounds will also be recognizable as Buddhism 101, albiet with few words of Pali or Sanskrit.  Still, Waking Up is valuable as a comprehensive argument for secular spirituality.

First  off, he has to defend the use of that highly charged term:

Whenever I use the word, as in referring to meditation as a “spiritual practice,” I hear from fellow skeptics and atheists who think that I have committed a grevious error . . . I do not share their semantic concerns.  Yes, to walk the aisles of any “spiritual” bookstore is to confront the yearning and credulity of our species by the yard, but there is no other term — apart from the even more problematic mystical or the more restrictive contemplative — with which to discuss the efforts people make, through meditation, psychedelics, or other means, to fully bring their minds into the present or to induce nonordinary states of consciousness. And no other word links this spectrum of experience to our ethical lives.

We note at the outset that Harris views spiritual practice as being principally about experiences, specifically induced changes in consciousness.  He makes this clear throughout the book:

Investigating the nature of consciousness itself–and transforming its contents through deliberate training–is the basis of spiritual life.

If inducing changes in consciousness is what Harris’s spirituality is all about, it is clear that not any old wisdom tradition will do the trick, and he is quite clear about his prejudices in this regard:

Although the experience of self-transcendence is, in principle, available to everyone, this possibility is only weakly attested to in the religious and philosophical literature of the West.  Only Buddhists and students of Advaita Vedanta . . .have been absolutely clear in asserting that spiritual life consists in overcoming the illusion of the self by paying close attention to our experience in the present moment.’

It should come as no surprise,  then that the nature of our spiritual condition and the prescription for it sounds a lot like a secular form of Buddhism.  Our problem is that our pleasures are fleeting and unreliable, and a thousand forms of suffering appear to arise in every moment.  As a result, we are continually pushed and pulled about by our desires and fears,  the chief manifestation of which is the constant chatter of thoughts that crowds our conscious mind, to the point where we mistake those thoughts, and the subject of those thoughts, as the reality of who we are.  If we pay careful attention to the contents of consciousness, however, the mind stills, we recognize that we are not our thoughts, and if we persist we will see that there really isn’t any thinker to begin with.  For Harris, observing the illusory nature of the self is the key to freedom.  To help us along, he offers a very basic breath meditation exercise.

Those who have embarked on a meditation practice will recall that beginners have a lot of questions.  How long and often should I practice?  How can I stick to it?  How do I know I’m doing it right or making any progress? How do I handle boredom, distraction, sleepyness, difficult emotions? How do I integrate my meditative insights into my everyday life? Unfortunately, this is pretty much where Harris’s spiritual guidance ends.

Instead, he launches into an analysis of what science does and doesn’t know about human consciousness.  He begins by rehearsing the so-called “hard problem” of consciousness, and agrees with the philosophers who hold that the arising of consciousness from unconscious processes is an insoluable mystery.  His discussion of such phenomena as divided consciousness in surgically split brains and unconscious information processing in the brain seems intended to provide scientific support for the meditative insight that the self we experience as a unified homunculus riding around in our head is an illusion.

Harris then moves to an examination of what it is we think we mean by the self, considering such elements as personal agency, self continuity, the inner dialog of thought, and the mental structures that enable us to form a ‘theory of mind’ regarding other people.  If we examine any of these elements carefully,  singlulary or in combination, whether scientifically, philosophically, or in our own experience, we will observe that the illusion of self does not survive our search for it. Harris goes on to argue in support of meditation as being the tool for the introspective examination of the self.

The final chapter is a grab-bag of related ideas: Harris’ thoughts about gurus (while it is necessary to study with an “expert”, the master/student relationship is fraught with danger: buyer beware), near-death experiences (bunk), and hallucinogenic drugs (they demonstrate the capacity of the mind but for transformative insight, but can be dangerous and may be uneccessary).  We come to the book’s end having heard a very interesting discussion about spiritual life, but having received very little guidance about how to live it.

If Harris’s depiction of his own spiritual awakening is intended to be guidance by example, it is a problematic one.  After teaching the reader a simple vipassana practice and extoling the scientific evidence for the efficacy of vipassana-based mindfulness mediation,  he relates that his own three years on silent vipassana retreat were essentially a dry hole.   It is not until he discovers Advaita Vedanta, which guides students to experience the non-dual awareness of pure consciousness devoid of self, that he begins to feel he is making progress.  This in turn leads him to Nepal to study with the Dzogchen master Tulku Urgyen Rimpoche, who imparts the “pointing instruction” empowerment to him. “I came to Tulku Urgyen yearning for the experience of self-transcendence, ” he writes, “and in a few minutes he showed me that I had no self to transcend.”

In retrospect, Harris concludes that vipassana practice is an ineffective way to achieve the goal of spirituality, at least in comparison to non-dual practices such as Advaita or Dzogchen.  Dualistic practices, like meditating on the breath, actually perpetuate the illusion they are trying to dispell:

[T]here are good reasons to believe that adopting a practice like meditation can lead to positive changes in one’s life. But the deepest goal of spirituality is freedom from the illusion of the self–and to seek such freedom, as though it were a future state to be attained through effort, is to reinforce the chains of one’s apparent bondage in each moment.

There’s a hitch, however.  Authentic Dzogchen teachings are traditionally secret, transmitted personally from master to student.  Tulku Urgyen was an exceptionally talented teacher, Harris says, but he is dead, and not all Dzogchen masters are as good, although Urgyen’s sons teach in his style.   The clear implication is that meaningful spiritual experience can only be obtained at the feet of the rare Dzogchen master who is talented enough to impart the pointing instruction effectively.  Even so, we are told, “One can never be sure how much Buddhist religiosity one will be asked to imbibe along the way.”

Surely Harris’s view is unnecessarily parochial. To begin with, is eliminating the perception of self really the ultimate goal of spiritual practice?  What about joy, equanimity, kindness, compassion, ethical guidance and moral courage? I believe that all of these goals are best advanced when we loosen our grip on the ego and cultivate our perception of connectedness rather than our illusion of isolation and alienation.  But the insight of non-self alone is not spiritual practice, let alone a spiritual life.

Secondly, Dzogchen practice is scarcely the only way such insights can be achieved.  Insight Meditation teachers have been blending traditional vipassana with methods from Advaita and Vajrayana for years now. Other than quoting the research done on MBSR and other mindfulness based therapies, Harris ignores these practices entirely.  If he had explored them, he might have learned that they also blend mindful examination of experience with the teaching of non-striving and resting in open awareness.  These approaches are not antithetical, but can in fact be complimentary.  And to learn them, one need neither travel to Nepal nor imbibe Buddhist religiosity.

I hope Waking Up succeeds in encouraging skeptical people to consider the possibility that contemplative practice can ease their suffering and open transformative vistas in their lives.  But if we admit that spiritual traditions can teach us truths about human experience that we can benefit from without the need to embrace supernatural belief, we must accept that those truths are not confined within one religious tradition, let alone one meditation technique.  There is no reason to believe that secular spirituality may not reflect as great a  variety of human aspirations and experiences as the religious versions do, or that it must limit itself in its capacity to draw from our spiritual heritage.  In the end, the dharma is not a set of teachings, practices or philosophies.  It is the wisdom of embodied human experience, and I believe building a secular spirituality starts with understanding that that wisdom is already available to each of us.