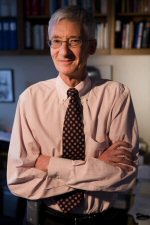 Dr. Roland Griffiths speaks with us about his work studying psilocybin’s intersection with meditation.

Many of our Buddhist centers here in the United States got their start and found practitioners in the psychedelic 60’s. Literally. The culture of the time had an exploration of pharmacologicals, especially those which could produce altered perceptions of reality. Some have said these experiences led them to meditation, as it opened their minds (no joke intended) to possibilities such altered states suggested.

Not all studies were scientific, or particularly helpful. In a backlash from the Timothy Leary drug culture, much of the valid scientific work was shut down. It is only recently that some scientists are taking up this particular area of study again. Today’s interview is particularly well timed, as only this week an article about these studies was released to the press. That article is linked on the episode page for this interview.

Dr. Roland Griffiths is a Professor of Behavioral Biology, Department of Psychiatry & Behavioral Sciences, and Professor of Neuroscience, Department of Neuroscience at Johns Hopkins University School of Medicine. He has been given the Solvay Award for Outstanding Basic Psychopharmacological Research on Affective Disorders from the American Psychological Association, and the Brady/Schuster Award for Outstanding Behavioral Science Research in Psychopharmacology and Substance Abuse.

So, sit back, relax, and have a nice ice tea.