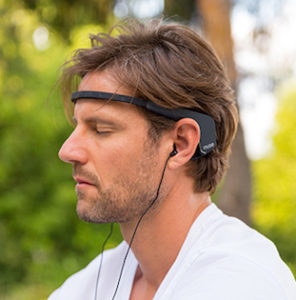 As soon as I saw the first ads for Muse, the “brain-sensing headband” that provides users with feedback during meditation, I felt both intrigued and conflicted. After all, you don’t need a $300 electronic gadget to meditate. Would this be just one more mindfulness commodity, another plaything to become attached to? Would it be useful? Would it even work?

And yet, like many practitioners, concentration is one of the hardest skills for me to work on while I’m meditating. As much as I try, my mind can be off to the races for many minutes before I’m even aware that I’ve lost focus. I know that this discovery is the key to mindfulness, and over the years I’ve decreased the judgmental scolding I used to give myself over it. But a tool that would let you know, gently and right away, when you are and aren’t aware might help you stay more on track with your concentration. That could make practicing concentration easier and more effective, helping build those skills more efficiently.

So when Ted interviewed Ariel Garten, one of the company’s founders, on the Present Moment Mindfulness podcast, and the article included a generous discount code that brought the price down substantially, I followed my impulse and decided to give it a try. It’s been four months of near-daily use now, and I’m even more conflicted about Muse than before I started.

What you get is a thin plastic band that fits around your forehead with large knobs on the ends that go over your ears. The band contains brainwave sensors at both the forehead and ears that measure the typical spectrum of electromagnetic brain waves from gamma through delta. The band transmits data to your phone or tablet via Bluetooth. Once there, the Muse app takes the data and turns it into feedback, using some algorithm that they never really explain. The feedback, which consists of your choice of different nature sounds that you listen to through headphones, gets louder when your brain is more “active” and quieter when your brain gets “calm.” If your brain is calm for a few seconds at a time, you hear the faint electronic chirping of synthesized bird calls. After your timed session, the app presents you with a line graph of your brain activity through the “active – neutral – calm” spectrum. You also get a point score, with one point for every second you were “neutral” and three for every second of calm. And you see the number of birds that landed during your calm moments, as well as your progress toward various goal “levels” the app presents you with.

A session runs like this. After you turn on the band and link it with the app, you go through a calibration process in which a soft female voice gives you 3 categories (“Historical Figures,” “Colors,” “Beverages,” “Countries,” and so on) while playing some pulsing electronic music in the background. Your task is to think of as many examples that fit in each category as possible. After the calibration is complete, the voice invites you to “Begin counting your breaths now.” The feedback starts a second later, continues for however long you’ve set the app for, then you hear a gentle tone and your session’s done. A press of an onscreen button takes you to your results graphics.

This sounds like a straightforward biofeedback routine. But one of the first conundrums I encountered when I started Musing was trying to figure out what the thing was actually measuring. For one thing, it seems to be very sensitive to breathing and eye motion, either one of which could cause a rush of feedback sound. There were many times when I felt that my mind was very calm, yet the feedback raged; and there were other times when I was actively thinking whole discursive sentences while the birds chirped merrily away. And each session was different; I could usually tell within the first three seconds whether the session would be a relatively calm one by the amount of feedback at the beginning and how easy it was to quell.

As you might imagine, the unpredictable intrusion of a sound, which, as gentle and natural as it might be, is a signal that your concentration is wavering, can have the effect of making your mind even more active, with frustration at your inability to control the feedback and attempts to figure out what you have to do to make it go quiet. Similarly, when you do make the feedback go quiet, it’s hard to avoid the inner “Yes!” reaction that makes it go loud again. This certainly made my initial experiences with Muse quite different from the normally placid sitting sessions I was used to.

The whole point of biofeedback is to train you to get the feedback you want. Overcoming a slight feeling of guilt, I started trying to figure out how to game Muse to have calmer sessions. Noticing Muse’s sensitivity to eye and breath motion, I experimented with doing bellows breathing and swinging my eyes around the room during the calibration, instead of sitting quietly with your eyes closed as you’re instructed. This did usually have the effect of making it easier to have a quiet session. I tried other kinds of breath control as well, including beginning the session with a breath technique called “four-seven-eight breathing” in which you breathe in through your nose for a long count of four, hold the breath for a long count of seven, and exhale slowly through the lips for a long count of eight. Finally, I used “one-to-one” breathing throughout the rest of the session, breathing in for a count of four and breathing out for a count of four. These breath control techniques usually, although not always, allow me to do a 25 minute Muse session that is at least 50% calm, and can get as high as the mid 90% range. It also reliably produces a powerful sensation of relaxation and ease, a real altered state of consciousness.

And yet, I think to myself sometimes, what am I doing? What were the first instructions I got from my mindfulness teacher, instructions I’ve repeated dozens of times while leading sessions myself? “Don’t try to control the breath; just let it flow naturally.” “Meditation isn’t about feeling calm, it’s about being present with whatever you’re experiencing in the present moment.” I was getting the calm feedback I wanted from Muse, and feeling pretty calm in the process. But was this the kind of meditation I wanted to be doing? And, because Muse’s algorithm was designed specifically for breath-focused meditation, it isn’t useful at all for techniques like metta, tonglen, Focusing, and other methods that have usually been a large part of my practice. It doesn’t even seem to work for other kinds of concentration practice, such as on sounds or body sensations. As a result, I spend most of my meditation time now trying to get my calmness rating up and meeting the other goals Muse sets for you, such as meditating for longer periods or doing a certain number of sessions in a set span of days, and less time doing the heart practices that, if you asked me, I’d tell you were arguably more important.

So does Muse work? After four months, I would have to say Muse is quite effective at doing what it’s designed to do, which is train you to keep your concentration on your breath. I am now able to stay mentally concentrated on my breathing for twenty five minutes with lapses that last no more than a few seconds — something that would not have been possible for me before using it. Also, the graduated goal stages Muse presents, along with the auditory and visual feedback, seem like they could help a beginner to get into a regular meditation habit. I certainly find the tangible evidence of my concentration gains quite addictive, although I realize I don’t really know what this is evidence of.

Muse has other quirks as well. It’s not unusual for the connection between the headband and app to drop, either during the calibration process or, worse, in the middle of a session. I notice it’s also very sensitive to variations in your mental activity before sitting down for a session. Early morning just after arising is quieter; later morning after doing the Sudoku and Cryptoquote are less so; and later afternoon after a couple cups of coffee is the worst. Some yoga or tai chi right before a session helps, just as you’d expect.

So at least Muse hasn’t been a pricey toy that I used a few times and tossed aside. It does seem to have helped me work on an aspect of my meditation practice that had been challenging for me. And it has promise; with another app you can buy, you can chart the raw electroencephalogram data Muse puts out, tracking activity in each part of the brainwave spectrum. It seems possible that a developer could use this information to create other algorithms that would provide feedback that trains you for heart practices, open awareness, body focus, and other kinds of mental training.

But at the same time, Muse has thrown my practice balance off. Its powerful incentives overshadow the other kinds of meditation, such as open mindfulness and brahmavihara meditations, that were staples of my practice four months ago. It is, alas, another attachment I’m going to have to work with. Just like all conditioned things, Muse is dukkha, too.

Posted in Articles and tagged attachment, awareness, clinging, dukkha, meditation, science
← Can You Be a Conservative and a Buddhist?Can Dependent Origination Be Saved? →