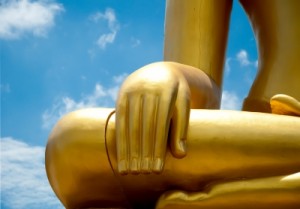 Image courtesy of cbenjasuwan at FreeDigitalPhotos.net

Walpola Rahula’s What the Buddha Taught was one of my first, formative introductions to the dhamma, and it remains one of my favorites. So it was with some interest that I ran across a copy of an earlier volume by Rahula, The Heritage of the Bhikkhu, at a library sale last summer. In this book, Rahula mounts a fierce and historically detailed defense of a Buddhist monastic role in politics, particularly in his native Sri Lanka, in which he himself was a monk. His foil is the centuries-long history of European colonialism, in which successive waves of European powers sought to suppress local Buddhist belief and practice in favor of Christianity.

In Rahula’s telling, one of the methods the colonial powers used to suppress Buddhism was to promote the notion that Buddhist monks were essentially world-renouncers who had no political role to play. As Edmund Perry writes in his forward to the English edition,

The image of the Buddhist monk as a public leader engaging in social and political activities had been obscured, deliberately so, by Western colonialists and their accompanying Christian missionaries. By imposing a particular type of Christian monasticism upon the Buddhist clergy, restricting the clergy’s activity to individual purification and temple ministries, the colonial administrators dispossessed the bhikkhus of their influence on the public life of their people and actually succeeded in instituting a tradition of Buddhist recluses, to the near exclusion of other types of clergy. (1974: xii)

Rahula’s aim in Heritage of the Bhikkhu is to refute this quietist conclusion. He claims that in fact Buddhism had been thoroughly entwined in Sri Lankan politics since its arrival on the island. He writes,

[Arahant] Mahinda [son of Emperor Asoka]’s idea was to establish Buddhism firmly and permanently as the national religion and as the heritage of the Sinhala people and of their land. …

The matter of establishing Buddhism in a country in this manner is not found in the Pāli Canon. Nevertheless Mahinda’s desire was to make Buddhism the national religion of the Sinhala people, and so it happened. …

… it is quite clear that the approval of the Saṅgha was necessary for a man to become King of Ceylon.

In a letter explaining the Sinhala law … it is stated that the first rule that a king of Ceylon should observe is never to embrace any other religion than Buddhism. … To act against Buddhism was considered tantamount to treason. (1974: 16-18).

And so on. Historical evidence like this inspires Rahula to advocate for what might be termed a benign Buddhist theocracy in Sri Lanka, as against its Christian colonizers. This extends to his advocacy for monastic involvement in political violence:

Thus, even in the 19th century, as in the past, patriotic Sinhalese laymen and the clergy fought together, sacrificing their lives in the cause of freedom and religion. Whatever the results of their efforts, whether successful or not, the Sinhala nation is forever beholden to these noble heroes. (1974: 67).

From this time the patriotism and the religion of the Sinhalese became inseparably linked. The religio-patriotism at that time assumed such overpowering proportions that both bhikkhus and laymen considered that even killing people in order to liberate the religion and the country was not a heinous crime. (1974: 21).

Historian SJ Tambiah suggests the Mahāvaṃsa itself was the source of this strain of Buddhist nationalism (1992: 129).

This raises delicate and uncomfortable questions, particularly at a time of violent, monk-led Buddhist nationalism such as that found in the Burmese 969 Movement, which I have discussed before.

In a recent blog post “Is ‘Buddhist ethics’ Buddhist?”, Amod Lele reminds us of the strain of anti-political quietism within the tradition. Elsewhere he cites Śāntideva as his muse in this regard.

And pace Rahula, Richard Gombrich writes, “I do not think that the Buddha took a serious interest in politics or intended his teaching to have political consequences.” (2006: 83)

Is this just the siren song of colonialism? Or should we take seriously that deep aspect of the tradition which is world-renouncing rather than world-embracing?

Contemporary “engaged Buddhism” says we should not: engaged Buddhism takes inspiration from the Bodhisattva’s path, and indeed indirectly from the political concerns of monks like Rahula, to say that Buddhism and both lay and monastic Buddhists have an essential political role to play.

Those of us on a secular path will, I think, look on this material with some concern. It is one thing to say that citizens should be politically engaged rather than apathetic. It is quite another to say that they should take direction from a religious infrastructure or ideology.

So for example, if we take the traditional Buddhist view that life begins early, when consciousness from a prior life attaches itself to a forming zygote, abortion becomes tantamount to murder. If however hand we dispense with notions of prior life consciousness we may see the situation differently: abortion cannot be murder in the absence of a functioning brain and nervous system. This then gets us into questions of evidence for rebirth, about which I have written previously. To an extent, where one goes on this kind of discussion will depend upon one’s alliance to the specifics of a particular faith-tradition.

Much as we may consider the Dalai Lama a wise man (and I do), we may also look somewhat askance on the implicit involvement of religion into politics that he represents. The Dalai Lama gets a free pass on account of his powerlessness as much as his wise attitude. Were he anything more than a political figurehead his position as ethical teacher and exemplar would become murkier.

Similarly, engaged Buddhism seems to many of us in the West a wise, indeed a necessary, practice since it can do so little harm and so much good. If Buddhism is going to be anything more than “a banal, therapeutic, self-help technique,” in the words of Ron Purser and David Loy, it has to engage ethically with the world. It has to awaken us to the ills of greed, hatred, and delusion; to the problems of violence and consumer culture; to the lies propagated in the media.

The problem with this from a secularist perspective is that ethics all too often curdles in the presence of religion. What seems a movement of liberation from one perspective seems a form of persecution, even genocide, from another. What seems a clear ethical directive from one perspective seems an outdated and harmful superstition from another. There is perhaps less at stake if one diligently pursues a policy of non-harming, but then is abortion harm? Is euthanasia? Is national liberation?

One of the things that tends to draw secularists to Buddhism is its relatively simple, straightforward, and credible ethical system. That is, we are drawn to it just because we already find ourselves largely in agreement with it. At least we find ourselves in agreement with the ethical system in its basic theoretical elaboration: as right speech, right action, and right livelihood for example. To look at Buddhism this way is to an extent an anachronism. It may even be a colonial construct, though if so it is one endorsed by Rahula himself. Trying to fit the full variety of Buddhist thought and practice over two and a half millennia into a single, coherent ethical system is a fool’s game.

The former kind of damage is I think too easily overstated. Traditional Buddhism has persisted in one form or another over more than two millennia. It will persist long into the future. A secularized path promises a marriage of early forms of scriptural Buddhism with secular modernity. There is a great deal that secular modernity has to learn from scriptural, and indeed practical, Buddhism. Buddhism also has a lot to learn from secular modernity. Buddhism has grown and changed in countless ways over the centuries, under conditions of influence from its cultures of residence. Now is no different. “Sabbe saṅkhārā aniccā” (Dhp. 277); all conditioned things change.

While the latter damage seems impossibly distant now in the West, it is one that should be contemplated. Power corrupts. One aim of secularism is to retain openness to all variety of religious and non-religious backgrounds within the public political sphere. While Buddhists (and indeed secular Buddhists) may feel that they have a special role to play, to be fair those of competing ideologies feel similarly.

Secularists should nevertheless take heart in Lele and Gombrich’s claim that Buddhism, or at least that key Buddhist figures, perhaps including the founder himself, were not political activists. There is room within some strains of traditional Buddhism for the kind of political quietism that would leave politics outside the scope of traditional religion. Jesus’s message to “Render unto Caesar the things that are Caesar’s, and unto God the things that are God’s” (Mat. 22:21) expresses a similar sentiment; one which has been roundly ignored by Christian religious and political figures.

The secular problem with religion is not that individual believers or monastics should have opinions conditioned by religious teaching. We are all conditioned in various ways, and religions do not have monopolies on ignorance. It is rather that in virtue of their social, economic, and political power, religions can and often do bully competing ideologies out of the public sphere. We may take comfort in the conceit that it’s all to the good if those bullied ideologies are ones we find distasteful, as might be the case if those in power were engaged Buddhists, but even so.

In fact engaged Buddhism requires secularist institutions to function optimally. The ideals of free inquiry, free press, and human rights are essential to engaged Buddhism, and religious nationalism is its enemy.

For many of us the notion of “Buddhist nationalism” is an oxymoron. Isn’t nationalism just another, particularly insidious, form of clinging? We are prone to think of Buddhism as perhaps the paradigmatic anti-nationalist form of thought. Nevertheless a look at Buddhist history, and even at the writings of some of the most illustrious recent teachers of the dhamma such as Walpola Rahula, suggest otherwise. Confining ourselves to the Theravāda, at least since the chronicles of the Mahāvaṃsa (3rd c. BCE – 5th c. CE) Buddhist monks were portrayed as playing an active role in king-making and even violence, and political power in Sri Lanka was seen as essentially an arm of Buddhist theocracy.

None of this need have anything to do with “engaged Buddhism”, of course. But it provides a cautionary tale. Power corrupts. Engagement promotes clinging, which promotes greed and hatred. While quietism may not be the appropriate answer for those of us who find ourselves politically engaged, nevertheless we should perhaps retain a quietist corner in our hearts, understanding that we can do the most good coming from a place of non-attachment. A secular attitude to religion’s place in politics provides one potential road to, and manifestation of, such non-attachment.

Walpola Rahula, The Heritage of the Bhhikkhu (Grove Press, 1974).

Posted in Articles
← Episode 233 :: Jundo Cohen :: Religious-Secular Buddhism: The Best of All WorldsMeditating Without Nirvana →