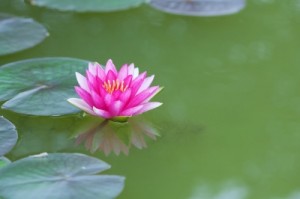 I’ve been doing mettā (lovingkindness) practice this last month. Day to day it involves spending meditation periods slowly repeating well-meaning hopes and wishes towards myself and others. It started off interesting, since I had to come up with some new formulae for my wishes, but it quickly became rote, much akin to breathing or repeating a mantra. (The latter is a practice I have never done).

In her book Lovingkindness, Sharon Salzberg talks about how the dull repetition of good wishes can, in time, seem to make a difference in one’s outlook and behavior: one finds oneself feeling and acting more kindly towards others. I think I’ve seen the same thing in myself, though I am hesitant to claim anything remotely like certainty. For one thing, my practice is much more limited than the intensive retreat situation in which Salzberg worked. For another, I know that one tends to find what one wants to, particularly in one’s own attitude and behavior.

But I will relate an interesting anecdote I noted in a daylong practice I had a few weeks ago. The daylong involved alternating sitting and walking meditation periods, but apart from that and a few short readings, the time was left up to us to do with as we saw fit. I decided to spend all the sits in mettā. (I find it hard to do mettā while walking).

My usual experience with daylong sits is that by the early afternoon small discomforts have made themselves apparent, and usually my last sitting or two is spent dealing more or less desperately with some kind of physical pain. This day, however, my experience was different.

With each sitting, I noticed my concentration improving with the mettā practice: going through the lists of hopes and wishes seemed to focus my mind, something I’d noticed in passing doing my daily sits, but which only really became apparent in a daylong. When the bell rang I could sense a marked shift in perception, which I do not ordinarily find when doing mindfulness practice. By the afternoon I also found that I was suffused by a deep, calm happiness, probably on account of the well-meaning wishes I was trying to generate. That happiness arose alongside the ordinary forms of pain I’d come to expect.

On the podcast, Ted has documented some studies of meditation on pain perception, for instance by Drs. Fadel Zeidan and John McHaffie, and by Tim Gard. These studied mindfulness meditation in particular, and reductions in pain intensity in the low to mid double-digit percentages.

Pain is, of course, famously responsive to mood and attitude, so it doesn’t make much sense to distinguish a placebo from a real effect, so long as we are talking about relatively mild pain. If the pain is of such intensity as to require drug treatment, then palliation would be gauged by any reduction in required drugs. If, say, someone only needed half the amount of painkillers, that would be a significant result.

I doubt studies on the meditative effects of very intense pain — such as operative or post-operative pain — could be carried out ethically, so I don’t expect this will be studied. However I remain somewhat skeptical of claims that mindfulness meditation can reduce pain intensity, simply because I’ve never found it in myself, or at least not to any significant degree. I’ve sat for many an hour mindfully observing terrific back pain; it didn’t get any better by doing so.

My wife has a chronic pain condition, and neither does she find that meditation helps to reduce pain; it helps to reduce pain’s unpleasantness, which is a more complex condition involving the constellation of thoughts and worries that surround pain. This may be of great benefit, but it isn’t the same as reducing the pain’s intensity.

At any rate. By doing a daylong mettā meditation, I found for the first time a real reduction in pain intensity, much as though I had taken some form of painkiller. I can only speak phenomenologically, which was that I knew the pain was there, but it didn’t bother me nearly as much as normally it would have. And the pain seemed somehow far away, suffused as I was by the happiness of doing the meditation. When the bell rang and I came out of mettā, the pain was there as normal.

While it may be useful for mindfulness, mettā bhāvanā is not itself a mindfulness practice. Instead, it is a practice of concentration: in the suttas it is often described as a route towards the jhānas or mental absorptions, such as in the Sankhitta Sutta (Aṅguttara Nikāya 8.63). In later traditions this continued. We find the Brahmavihāras (of which mettā is the first) included in the section on concentration in the Theravādin Visuddhimagga, and under the section on the dhyānas (Pāli: jhānas) in the Sarvāstivādin Abhidharmakośa. Today contemporary teachers like Bhante Gunaratana use mettā as a way into the jhānas.

Phenomenologically these seem to me entirely appropriate: in concentration practice, the culmination of which is jhāna, one focuses the mind on a single object and holds it there. As mettā practice continues, one concentrates on the series of wishes, on their qualities, on the people to whom one directs those wishes, and so on. As the practice deepens, I find that this changes to a more specific focus onto the experience of mettā itself.

However it’s not simply that one becomes concentrated. One can become concentrated onto anything. My experience with pain during concentration isn’t that different from my experience with pain during mindfulness: pain is dulled to a small degree as I keep my mind focused on the breath, but usually the pain overcomes the concentration, and shifting to concentrate on the pain doesn’t decrease its intensity. What I found made the difference was the happiness; that is, it wasn’t the concentration per se that minimized the pain, it was the quality of concentration. It was as though the psychological pleasantness of well-wishing helped to counter physical discomfort.

I don’t know if this sort of process has been studied. I do recall (though I cannot place it just now) hearing of concentration practice having some effect on pain perception, but again, meditation on the breath is not the same as mettā.

The experience I recount is only from a single day, and may not be replicable. However given the extent of different kinds of meditation practice, I imagine that anecdotes can at least be food for thought and perhaps future experimentation, to see if there’s anything really there. Meanwhile we hope for the best, and for the well-being of all.