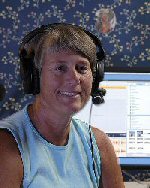 Dr. Ginger Campbell and Dana Nourie speak with us about the complex interrelated processes we refer to as consciousness.

What is self? Is it your body, so if you lose your left pinky finger, is that really losing part of you? Is it your memories? Or some other aspect of mind, like consciousness? And for that matter, what is consciousness?

There are many different ideas about these questions, from a variety of disciplines. Scientific thought may not say the same thing as philosophy, which in turn has a wide variety of concepts that may not merge so well with an equally complext set of religious views. However we answer the question of what is consciousness, it is a rich area of thought, discussion, debate, and exploration.

Dr. Ginger Campbell is an experienced emergency physician with a long-standing interest in mind-body medicine, the brain, and consciousness. She is also interested in a wide variety of other topics including the history of science and ideas, began podcasting in 2006, and has discovered that it is a great way to share ideas with people from around the world. Her Brain Science Podcast explores how recent scientific discoveries are unraveling age-old mysteries, such as intelligence, emotions, personality, and memory.

Dana Nourie does not label herself a Buddhist, though she does practice Buddha’s teachings and associates with Secular Buddhists. She has been a guest on The Secular Buddhist podcast many times, and has been the primary

So, sit back, relax, and have a nice Downy White tea.

The music heard in the middle of the podcast is from Rodrigo Rodriguez. The track used in this episode is “Lady of the Snow” from his CD, Shakuhachi Meditations.