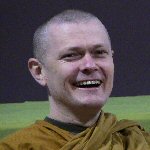 Bhikkhu Sujato joins us to speak about the ordination of women in the Theravada tradition, and his work with canonical veracity in The Authenticity Project.

How do we know for sure what Gotama said? We probably can’t, and we can further muddy the waters with unsupportable assertions about the perfection of the Pali canon as the True Word of The Buddha. Or, we can use the fine minds we have, apply some reason, and have some engaging conjecture about consistent messages showing through the various texts that have come to us through the ages. Of course there are going to be differences of opinion and valid acceptance criteria, that’s expected; we’re not measuring the rate of a falling object in a vacuum, and can’t expect that kind of accuracy. That doesn’t mean we can’t ask the questions, and it doesn’t mean we can’t be enthusiastic participants in companionable dialogue.

Ajahn Sujato is an Australian Buddhist Monk. In 1994 he left his music career to take higher ordination in Thailand in the forest lineage of Ajahn Chah. As well as living for several years in forest monasteries and remote hermitages in Thailand, he spent three years in Bodhinyana Monastery (Perth) as secretary of Ajahn Brahmavamso, and over a year in a cave in Malaysia.

So, sit back, relax, and have a nice Twinings Australian Afternoon Tea.

Yes, that is a pre-ordination Bhante Sujato playing guitar.

The music heard in the middle of the podcast is from Rodrigo Rodriguez. The track used in this episode is “Chaniwa” from his CD, Shakuhachi Meditations.

Posted in The Secular Buddhist Podcast
← What is the Eightfold Path?The Four Noble Truths →