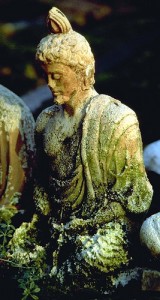 According to the tales in the Pali Canon, the very first teaching Gotama gave after his awakening was what we have come to know as the Four Noble Truths. This concept is foundational to all traditions that we call Buddhism, Secular Buddhism included. To the extent that newcomers to dharma practice know any Buddhist doctrine at all, it’s probably the Four Noble Truths, possibly picked up in a comparative religion course. Unfortunately, just as they are the most widely known of Gotama’s teachings, they are also the most widely misunderstood.

Here is the Buddhism 101 version, which I found on a website called “The Big View”

We notice that these are truth statements about the world, a set of propositions to be believed, not unlike the Apostle’s Creed in Christianity. On the basis of such a creed, it’s no wonder Buddhism has the reputation of being a rather dour and pessimistic belief system. Life means suffering? Most people will readily recall moments of beauty and happiness in their lives, and they feel justified in seeking more such moments. The Buddhism expressed here offers only the cessation of suffering, which sounds like typical religious pie in the sky. That pie lies on the other side of a path – the Eightfold Path – that also has a familiar ring to it: Right View, Right Thought, Right Speech, Right Action, Right Livelihood, Right Effort, Right Mindfulness, Right Concentration. Two fewer commandments than Judeo-Christian religion, but the message seems the same: Do everything right and all your troubles will be over.

A look at how Gotama is recorded as delivering these teachings in his First Sermon reveals something much different than the stock presentation we may be used to.

This is the arising: it is craving which is repetitive, wallowing in attachment and greed, obsessively indulging in this and that: craving for stimulation, craving for existence, craving for non-existence.

This is the ceasing: the traceless fading away and cessation of that craving, the letting go and abandoning of it, freedom and independence from it.

And this is the path: the path with eight branches: right vision, thought, speech, action, livelihood, effort, mindfulness, concentration.

The first thing we notice is that Gotama doesn’t say, “Life is suffering.” The word usually translated as “suffering” is dukkha, and as Gotama uses the word above, we can see that it is much more complex than just suffering. It is a characteristic of our lived experience which we encounter when we confront the realities of the human condition: sickness, ageing, death, the inability to get what we want and the necessity of putting up with what we don’t want. Dukkha is what it’s like to be a human being.

As a result of our vulnerability and dissatisfaction, craving arises. Again, this is more than just “attachment”. Gotama calls it an obsession: we crave for mental and physical stimulation; we crave to be better, smarter, more attractive, wealthier, more powerful, more loveable, more spiritual; and we crave non-existence, invisibility, that our faults and weaknesses could disappear, that our brokenness will not be seen by others. In other words, we crave that human life not be what it is, and so that craving can never be satisfied, but will continue to drive us on the ultimate wild goose chase. That set of futile compulsions defines how we see ourselves and the world; it becomes who we are.

Perhaps the biggest difference between Gotama’s teaching and the stock Buddhism 101 version is the third truth. It is not suffering that ceases, it’s craving. In other words, it’s possible to come into a different relationship to the reality of our life that enables us to drop craving and be free of its wallowing, obsessive compulsions.

Notice that in this presentation, Gotama doesn’t call the eight-branched path “the path to the cessation of suffering.” In fact, its placement at the end of the four truths can be seen as the culmination of what has gone before, the kind of life that becomes available to us when we can experience freedom from our habitual craving reaction to dukkha.

So how do we get to this freedom? Gotama next restates the four truths in a surprising way:

Here we see that the four truths are prescriptions for action. When we fully know dukkha – when we see how it pervades our lives, and how it arises inevitably from our existential predicament – we can realize the futility of our craving for life to be other than it is, and let go of that craving. And as we let go, craving ceases, and we are free to cultivate a new way of life.

Notice that the Eightfold Path isn’t linear, but circular and self-reinforcing. It appears to end with Right Mindfulness and Right Concentration, but until we can view the world with minds that are at least a little stable and calm (and so discover that equanimity is possible), we can’t have the Right View that puts our feet on the path to begin with. As we bring mindful awareness to every aspect of our lives – how we think, speak and act, how we work, what we strive for – our mindfulness and concentration grow, and we become increasingly free of our craving reactivity, which in turn deepens our awareness of and embrace of the path.

At the end of this First Sermon, Gotama’s first convert expresses his understanding this way: “Whatever arises, ceases.” This is the simplest expression of another foundational element of Gotama’s teaching, dependent arising, the understanding that nothing has an independent, fixed existence but arises and ceases within an ever changing matrix of conditions. The Four Noble Truths, then, are the ramifications of dependent arising for the human condition. When we fully internalize the shifting, unreliable, ungraspable nature of our experience, we will see that there is nothing to grasp for and so no reason for grasping. It will be clear that our craving is based on an illusory understanding of life, and we can begin to let go. Rather than reacting to chimeras, we will be free to respond to the world as it is.

The text is Stephen Batchelor’s translation of the Vinaya Mahavagga I.5, from The Pali Canon: Source Texts for Secular Buddhism.

This article is part of the New to Secular Buddhism section of SBA.