Stephen Schettini was asked by a correspondent about his insights on the guru-disciple relationship and the suitability/pitfalls of such a model in the modern age. He was asked, “How did you cope with rejecting those relationships in your own life; and now with your role as a teacher how do you approach this?”

First, the background to my own experience of the guru-disciple relationship as I knew it in the context of Tibetan Buddhism. My personal answer follows. 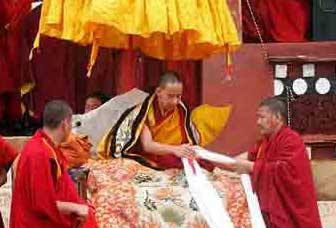 The Teacher in Tibetan Buddhism

The guru thing was so natural for Tibetans that they never questioned it. Every monk I met expressed filial love for his teacher. As they described his qualities, they often cried tears of gratitude. Before they learned the alphabet or their morning prayers, boy-monks were taught to look upon their teachers as the entire source of all goodness and the only hope of escape from cyclic existence. What that might have meant to them personally is hard to say, but it did make me think of my own desperate childhood struggle with hell and God’s love.

If Westerners are conflicted by the guru thing, it’s because it’s just so unfamiliar. Christian monasticism demands obedience to the abbot, and worship includes surrender to the Almighty, but there’s no call for devotion to another human being. Westerners sometimes fall into the forms of guru devotion so piously that they’re just not believable; clearly, they have some unstated agenda and/or subconscious needs. Whether the guru actually demands it or they simply want it for themselves, they’re held for ransom by the idea that true knowledge comes only through the guru. That’s how I felt as a young monk, when I tried so hard to enter into the spirit of it.

Westerners are not normally inclined to see the source of all knowledge in any one person. By half way through secondary school we’ve learned that knowledge emerges from research, and includes differences of opinion, level-headed skepticism and debate.

Debate, Skepticism and the Gelugpa Art of Definitions

Debate (‘tsenyi,’ mtshan nyid) was what my teacher Geshe Rabten cared about above all else. At least, that’s how we translated the Tibetan word, which actually means ‘definitions.’ Tibetan boys learned by first memorizing cryptic texts and then being spoon-fed their meaning and sparring with one another in the public courtyard. This dialectical competition winnows out tomorrow’s teachers from the vast monastic proletariat by juggling ideas with great subtlety. However, it never really challenges authority.

Guru devotion isn’t actually a feature of these logical teachings, but of tantra, which manipulates emotions — especially lust and anger — and which is taught long after the rational stuff. Nevertheless, in basic training young Tibetan monks learn to defer to superiors, mingle with peers and be kind to inferiors. Stratification is part and parcel of Tibetan life. It’s built into the language. There are separate sets of nouns and verbs for talking up, across or down to others in Tibetan.

After basic training, some monks go on to tantric college to learn ritual, magic and symbolism. On this ‘accelerated’ path to Buddhahood, the guru is paramount. Amid secret initiations and counter-intuitive thinking about renunciation, insight and compassion, one’s attitude to the initiating lama will make or break the initiate, who must see him as fully enlightened. One must view oneself as fully enlightened too, for tantra ‘takes the goal as the path.’

What not enough Western Buddhists realize is there are many types of teacher-student relationships. One’s first teacher is merely an ‘instructor.’ Someone before whom one makes ordinary vows is a ‘preceptor.’ The housemaster with whom one lives and who teaches monastic etiquette is like a parent. And the tantric guru-disciple relationship is not even established unless the initiating mentality is impeccably transmitted. Attendance at the ritual is not sufficient. One must be psychically ready, able and receptive, and the relationship must have true interpersonal potential. The student is expected to check out the teacher, often for years, to be sure he/she can engage fully in that relationship.

It should go without saying that throughout all this, one remains faithful to the essence of Buddhism and maintains a critical mind. This is where most Westerners get lost in unanswerable questions: How to be critical about a superior while viewing him as fully enlightened? And, what does ‘fully enlightened’ really mean in everyday terms?

There is however a question that is answerable, although it requires unusual honesty: did one authentically enter into a profound symbiotic relationship with this particular teacher, or is this just the fanciful projection of an overambitious neophyte?

I woke up to this question some years after attending my first tantric ceremonies and after struggling with deep doubts about my commitment. Although my teachers were certainly learned and compassionate, I’d seen them behave as rather ordinary, flawed human beings, basically on the same ground as me. I felt deep guilt over this perception at the time, although today it seems perfectly reasonable and makes me smile at my young self.

It led me to wonder about what I believed and, above all, why I believed. The answers came flooding out, and with them the realization that I’d long kept them bottled up. This is what I discovered: what I wanted from my teachers was the certainty that I was on the right path, the security of being in the right hands and the freedom of knowing that if I tripped, someone would catch me, or at least wag their finger benevolently and point out what I was missing.

But this goes against the tradition embraced by the Buddha, from which all his teaching emerged. He left home to be a samana — a homeless wanderer who saw happiness and unhappiness as nothing more, nothing less then a product of one’s own actions. For him, the veils of illusion are inner challenges that cannot be torn away by anyone else.

I went back to the Pali Canon, the only Buddhist texts before the later inventions of Mahayana, Madhyamika or Tantra. I found in them no mention of gurus or of devotion. I learned that in his later years, some of the Buddha’s disciples asked who would replace him. He appointed no one, saying only that the teaching itself would guide them.

I looked into the history of Buddhism and saw that as it grew and was absorbed by various cultures, it acquired their questions and symbols, their inclinations and prejudices. How could it not? Dhamma, like everything else, is contingent. The forms it would take over time were shaped by causes and conditions; what it became in its various incarnations would reflect those cultures.

How to disentangle all that? Thousands of scholars all over the world try to do this through analysis of the texts and, increasingly, though comparative philology and archeology. Then there’s a whole other source of effort: those who try to understand what the Buddha meant through their own experience, in which the unimportant falls away quite naturally, and the effective practices come to the fore. This was my way. I’ve always distrusted sophistry and admired the Buddha for the skillful way he dealt with believers, ritualists and askers of impossible questions.

How this affects my teaching is simple and liberating. I teach what I’ve learned from my own experience; nothing more. I eschew theory, and if someone really wants to know about a particular tenet of Buddhism, I’ll explain as best I can while distancing myself from theoretical conclusions; I avoid jargon. My point is not that I know better, but that this path is not one of knowledge; it’s of insight, and the basic insight is to see that what we perceive is an unstable composite. What benefits us is to lose our certainties and reach the end of views.

My students don’t need this explained to them. It’s what they come for. They’re not looking for more stuff. They know there’s nothing new under the sun. Rather, they want new angles on what they already know, which for most of them is already more than enough. Listening to my reflections on life, they get to see things from another angle; when the time’s right, their own perspective shifts.

Often, they question me; sometimes they disagree. Then I breathe a sigh of relief, for it confirms I’ve done nothing to numb their natural instincts. They’re getting the point: it’s all about emotional nakedness and intellectual skepticism.

I was trained to pass on the interpretations and cultural values approved of by my teachers and their Tibetan lineage, but I decided a long time ago to walk away from that. I share only what I’ve internalized. I’m not so much a theorist as a storyteller. I’m happy with that label. What is awakening if it’s not experience without an agenda?