Introductory note: This is a response to Doug Smith’s recent post here. I think Doug is right on nearly all counts, though he may have misinterpreted some of the contemporary writers he draws from. In any case, I hope this small contribution (cross-posted at Patheos) helps further the discussion. 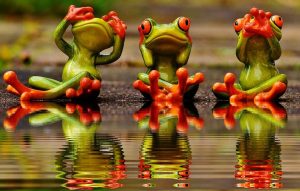 There is much about mindfulness being published these days: studies, meta-studies, mega-studies, maha-megha-studies (bad Buddhist studies joke). And then there are the opinion pieces; “We’re all doomed. Mindfulness? Humph!”

As I mentioned in my introduction to Doug Smith’s recent article here, what we are seeing is the growth of a discussion, a dialogue. And as with many early discussions with disparate parties, it can sound a bit “noisy”, and sometimes well-meaning people who are quite close in their views can seem miles apart.

Let me begin by briefly summarizing Doug’s piece after those he draws from.

Most recent are two articles co-authored by Ron Purser and Edwin Ng: “Cutting Through the Corporate Mindfulness Hype” and “Mindfulness and Self-Care: Why Should I Care?”

The first of these explicitly points to the linkage between contemporary mindfulness practices (which are acknowledged as useful in lowering individual stress and helping with focus) and corporate/organization level discourse.  Claims about the benefits of mindfulness aren’t disputed; it is the unwarranted contorting of those claims into “management science”, which “has a long and dubious history” that has Purser and Ng worried. This focus of criticism is again stated near the end, “Therapeutic benefits is one thing, callous institutional imperatives are another matter.”

In the second piece, lead-authored by Edwin Ng, they pivot toward real life examples of “critical mindfulness” which “invites people to be receptive to ‘who knows?’ by questioning for themselves the everyday ‘rules of the game’. To use critical mindfulness for ethical self-care is to perform an experiment…. to expose and transform the assumptions and conditionings shaping subjective experience.” So the critique is not against mindfulness per se, but rather an attempt to open up questions (beginning with the title itself). The point seems to be that even the choice to take up mindfulness should be made with a deeper question of why; the sort that philosophers and three year-olds are famous for. This why keeps popping up, and while perhaps irritating, it is meant to be cleansing, like the scrubbing of a mirror or the dirt off one’s body after a long day of labor.

Doug also brings up Stephen Schettini’s 2014 article “Mindful, or Mind Empty“. In it, Schettini himself does us the service of summarizing then-recent developments, from articles by Joshua Eaton, Ron Purser and David Forbes, and Amanda Ream, all critical of certain developments in modern mindfulness (and its use by the wealthiest in society). Schettini’s response: “same old.” Industrialists co-opted Christianity in the nineteenth century and beyond, so we shouldn’t be surprised that aspects of Buddhism are being utilized along similar lines. And to what harm? “You’ll just have to do with mindfulness what you can. Buddhism has lost control of the term. It drifts through the idiom like a lost balloon, as misunderstood now as Karma™ andSamsara™. Some people will use it to calm down, perhaps even delay heart-attacks. Good for them.”

Finally, Doug points back to the still earlier (2013) article by Purser and David Loy, “Beyond McMindfulness“, which I have already discussed at some length. It is there that Doug finds the claim that he bases his piece on: “Uncoupling mindfulness from its ethical and religious Buddhist context … decontextualizing [it] from its original liberative and transformative purpose, as well as its foundation in social ethics …”

Doug’s piece asks if this is, in fact, what is happening by digging into that very historical/textual context. His findings suggest that the Buddha had no problem teaching meditation to laypeople, and his teachings on ethics to the laity were toned down considerably from what he taught to monastics. This is important, as some contemporary writers still mistake Buddhist ethics as monolithic and renunciatory in nature. The truth is, Buddhist ethics are far more diverse and complex, from the earliest tradition (based on what we know of it) to today. Doug draws from Richard Gombrich in a section titled “The Buddha Was Not an Ethical Perfectionist”, showing his use of compromise and pragmatic rule-creation. He concludes that the criticisms of modern mindfulness seem to have their roots more in the radical ideals of early Christianity than Buddhism.

In further analyzing the “foundations of social ethics” in the original teachings, Doug points to alcohol and sex as better targets of worry than “profit” for laypeople. He writes, “At any rate, the Buddha’s message contains no anti-capitalist message remotely as strong as his message against alcohol and sex. Insofar as we are concerned with recovering Buddhism’s ‘original liberative purpose’ we should be aiming for eradication of the latter rather than the former.”

As I mentioned at the start, I think some of these discussions involve well-meaning people speaking past one another. This can happen for a number of reasons, from geographic and educational backgrounds to the necessary brevity of blog-posts/articles like this one. Doug tends to read the above posts as suggesting “censure or vilification” of mindfulness practice by wealth-seeking laity, and indeed that could be a fair reading. However, the articles could be read as much more focused on particular trends in-or alongside– mindfulness practice today (Purser is a professor of management, Ng is a cultural critic, Schettini is himself a mindfulness teacher). Everyone seems to be in favor of mindfulness, it’s just a matter of how – and who profits?

Returning to what I wrote in 2013 (Mindfulness: Critics and Defenders), the discussion seems to follow the “tug-of-war” that has been happening in Buddhism going back at least to the 8th century in China – perhaps earlier if we read some of the debates happening in the lifetime of the Buddha and immediately thereafter. How much do ethics really matter? As Doug’s piece points out and we find throughout the history of Buddhism, there is a certain amount of pragmatism in Buddhist ethics, not every “good Buddhist” needs to drop everything and follow the Buddha into homelessness.

As Peter Turner noted in a comment on a post here in January (Mindfulness: the Single most impactful aspect of Buddhism in America), “All beginning meditators are first motivated by superficial and/or selfish reasons. The Buddha discovered that when practiced correctly and diligently, mindfulness meditation was key to his realization of the Three Marks of existence…”  So we might allow that individuals come to mindfulness for the wrong reasons. Perhaps, too, we can let corporations have their mindfulness? From a strictly Buddhist ethical point of view, there is no reason to deny them tout court. I don’t think Purser or Ng are trying to do this – their first article seems to say simply that “you can’t claim systemic benefits where there is no evidence of systemic benefits…” and “you can’t claim power neutrality” where there is none.

The clearer target would be other activities, as Doug suggests for individuals. Does the corporation promote harmful drug use or destroy the environment? In those cases the ethical Buddhist would be obliged, I think, to point out the harm and seek its cessation. Even though Buddhist soteriology is clearly directed at awakening, and this generally requires abandonment of wealth, sex, and alcohol at some point, plenty of Buddhism (the bulk in terms of sheer numbers) is found in the lives of ordinary people. Nudging people toward a more (Buddhist) ethical life through teaching mindfulness is one option. Nudging them toward historical Buddhist principles and understandings is another. Lastly, developing the Buddha’s social ethics by pointing at entire systems of dysfunction as in need of abandoning, as the Buddha did at times (most notably in DN 2, “The Fruits of the Contemplative Life”), is a worthy activity which has been largely lost as Buddhism has come to the West.

Posted in Articles and tagged mindfulness, Pali canon
← On Some Criticisms of Modern MindfulnessEpisode 248 :: Marlowe Sand :: Unplugged — Paradise and Promises: Chronicles of My Life with a Self-Declared, Modern-Day Buddha →