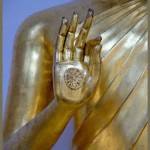 Buddhists (secular and non-secular alike) have it right: suffering is caused by craving. But that’s not the end of the story. While the Buddha’s views on suffering provide us with essential insights about how and why we suffer, we need to broaden our view of suffering beyond the explanation offered by mainstream Western Buddhists.

As with his other articles on various aspects of Buddhism on the SBA website, Doug Smith did an admirable job in his April 23, 2015 blog post on the Second Noble Truth, “On Craving”, of elucidating this basic element of Buddhism.[1] In this post, Doug explained how the cause of suffering/dukkha is craving; and that craving is due to both our tendency to prefer pleasant experiences, as well as a false view of the self and the phenomena which we experience as permanent, fixed, and solid.

The distinction between the hedonic nature of our various experiences and the way in which these “contact feelings” are transformed into forms of craving which cause suffering is one of the most important insights of Buddhism. Whether one is a secular or non-secular Buddhist, the view that all human beings cause unnecessary suffering to themselves – “the second arrow” – beyond the inevitable physical, emotional, and mental pains of life is an essential element of our understanding of the world.[2]

In this post, I want to offer a perspective which embraces this insight, but incorporates it into a broader view of the causes of suffering. First, I will explicate what I call the “mainstream view” among Western Buddhists about why we habitually move from feeling to craving, the role of craving in creating social harming, and why it is possible to break the link between feeling and craving so that the saṃsāric process of suffering can be ended (even momentarily).

Then, I will lay out a perspective which broadens the notion of suffering to encompass three interrelated and interacting sources of suffering. As noted, the distinction between the first two sources is an essential element of a Buddhist understanding of suffering: the primary pain caused by life’s vicissitudes (first arrow) and our biologically-driven and socially-conditioned tendency to move from feeling to craving (second arrow). However, I will argue that the harmful impact of exploitative and oppressive social institutions (third arrow) is an equally significant and relatively independent source of suffering.

The Mainstream View on the Cause of Unnecessary Suffering

The cause of unnecessary suffering is the move from feelings to craving. But why does that move occur seemingly automatically, yet with such negative consequences for us? And why is it so difficult to establish a gap or pause between the two in order to break the link?

The answer commonly provided by Western Buddhist teachers, regardless of lineage, is that we are biologically primed to crave pleasant phenomena and to be averse toward unpleasant phenomena. As Doug says in his post, “The basic idea is that pleasant sensations induce in us a craving for their continuation, painful feelings induce in us a craving for their cessation, and neutral sensations induce in us either dull passivity or a craving for pleasant sensations.” This biological mechanism is so strong that it affects not just our emotional and volitional tendencies; our very sense of our self is profoundly shaped by the preference for pleasant experiences. Because we are biological organisms whose survival depends on getting what we want and need in a perilous world (the evolutionary basis for the preference for pleasant experiences) , we are predisposed to see ourselves as the “center” of our experience, separate and distinct from other beings and the world. In short, biological preference, in conjunction with a false or deluded view of the self and the world – which in turn is shaped by this preference – is the primary basis for the universal tendency to crave.

Biological preference and false view have crucial social implications for Buddhists. Our modes of interpersonal interaction and our social institutions are based on and reflect the biological preference and false view. As a result, interpersonal interactions and social institutions are characterized by greed, hatred, and delusion. We treat each other badly and create social institutions which exploit and oppress individuals and groups. Individuals’ unskillful emotions, thoughts, speech, and action thus lead to patterns or “habits” of social harming on both micro and macro levels.

The Mainstream View on How It Is Possible to End Suffering

This vicious cycle of individual craving leading to social harming, which in turn reinforces individual craving, would seem to be impervious to change. Yet, Buddhism is not just about the cause and process of suffering; it is also about the potential for human beings to create a pause, and then a break, between feelings and craving, thus ending (even momentarily) unnecessary suffering.

If biology and society promote craving, then, for most Buddhists, the source of freedom from suffering must lie elsewhere, in an “ultimate” or “absolute” dimension with which we, as human beings, can connect. This connection with the ultimate enables us to experience nirvana – the unconditioned – and gain freedom from suffering.

Within mainstream Buddhism, there are a variety of views about how human beings are connected with the ultimate. Bhikkhu Bodhi has argued that, for Theravada Buddhists, the ultimate is understood as the dualistic opposite to the biologically- and socially-driven samsaric, conditioned world of suffering. To connect with the unconditioned ultimate – nirvana – we need to overcome craving and false view through a long, dedicated process of spiritual practice.[3]

More commonly, the connection with the ultimate is understood as inherent in human beings; we just need to discover or realize that we are already part of or an aspect of the ultimate. The notion that all human beings possess Buddha Nature is a common way of expressing this idea. Whatever our flaws – our craving, aversion, and deluded views – we are, as Ethan Nichtern wrote in his new book, The Road Home: A Contemporary Exploration of the Buddhist Path, “basically good and endowed with inherent wisdom” (p.93). Because we have these Buddha-like qualities, we can pause, and then break the link between feelings and craving.[4]

Ethan Nichtern is a teacher and writer in the Shambhala tradition, a form of Vajryana Buddhism. The notion of Buddha Nature, however, is an essential element of other lineages as well, particularly Zen Buddhism and other Mahayana lineages. But even some Theravada Buddhist teachers subscribe to the notion of Buddha Nature. For example, Jack Kornfield, one of the co-founders of the insight meditation school, has argued that:

Beneath our struggles and beyond any desire to develop self, we can discover our Buddha nature, an inherent    fearlessness and connectedness, integrity, and belonging. Like groundwater these essential qualities are our true nature, manifesting whenever we are able to let go of our limited sense of ourselves, our unworthiness, our deficiency, and our longing.….(211)[5]

Whether viewed as the dual opposite to the samsaric world of suffering or as our inherent nature, our ability to connect with an ultimate dimension is the basis of ending suffering, of our freedom, according to the mainstream view.

Problems with the Mainstream View

From the perspective of a secular Buddhist who also believes in the need for transformative social change, I see two problems with the mainstream view.[6]

First, the notion of an absolute or ultimate dimension is inconsistent with a secular Buddhist’s belief that reality is composed of the processes, laws, and entities of nature (which range from sub-atomic particles to the products of human culture). While all Buddhist lineages reject the theistic notion of a God qua Creator, who exists “outside” the naturalistic world, mainstream Buddhism shares with all other religions the assumption of a non-naturalistic, ultimate as a central element of its world view.

Rather than posit an ultimate dimension as either the source or goal of our practice, secular Buddhists believe that the capacities for both unskillful and skillful thoughts, emotions, speech, and action are rooted in and develop in the naturalistic world. We have a biologically-driven and socially-conditioned tendency toward greed, hatred, and delusion, but our capacity to be kind, compassionate, and wise is similarly based on how we are socialized, as well as the unique, biologically-evolved human capacities for empathy and creative intelligence.

Second, social problems are, in the mainstream view, seen primarily as a reflection of individuals’ greed, hatred, and delusion. But these unskillful qualities of individuals, as well as their opposite skillful counterparts, are just as much a product of social processes. In fact, one can only be an individual human being – with distinctive characteristics and qualities – because one develops in and through various social processes, from a parent’s sensuous interaction with an infant, to the experience of going to school, to a person’s work life in a globalized capitalist economy. Further, society’s impact on individuals is enduring and profound; while social institutions are created and sustained by individuals, the particular character and quality of social institutions play an essential role in determining which capacities – skillful or unskillful – are most highly developed.

Why does this matter? The tendency of many Western Buddhists is to focus on meditation as a way to break the link between hedonic states and craving, and thus reduce suffering. Well, if we recognize that there is a two-way, complex relationship between the individual and society, then we can appreciate that both individual, spiritual practices like meditation and action or engagement to reduce social harming (exploitation, oppression, devaluation) are equally important in reducing suffering and facilitating human flourishing.

A Broader View of the Causes of Suffering

I have argued that, as secular Buddhists, we should reject any notion of an ultimate realm as a source or end point for the release from suffering, as well as recognize that human suffering occurs within the context of a complex, two way interaction between the individual and society, both of which can and do cause suffering.

If we now bring back in the “first arrow” of suffering caused by the inevitable physical, emotional, and mental pains which arise for all human beings due to life’s vicissitudes, we can identify three sources of suffering:

While earlier, following the Buddha, I used the metaphor of an “arrow” to indicate a source of suffering, it would be better to think of each of the above as part of an interrelated set of causes and conditions which, as a whole, lead human beings to suffer, rather than as different forms of the same thing – Arrow 1, Arrow 2, and Arrow 3. In particular, as part of a complex interaction, #2 & #3 are sources of suffering. But #2 and #3 are in turn embedded in #1, the inevitable suffering of changing, conditioned experience.

Here is how the relationship between the three sources of suffering can be graphically expressed:

From a secular, socially engaged Buddhist perspective, what are the implications of this broader notion of the causes of suffering for understanding how and why we can reduce suffering and facilitate human flourishing? Briefly put, they are the following:

I hope to develop some of these ideas in future blog posts.

4 Nichtern, Ethan. 2015. The Road Home: A Contemporary Exploration of the Buddhist Path. Macmillan.

5 Kornfield, Jack. 1993. A Path With Heart: A Guide Through the Perils and Promises of Spiritual Life. New York: Bantam Books.

6 In my article, “Secular, Radically Engaged Buddhism: At the Crossroads of Individual and Social Transformation”, I discuss these two problems in much more detail and depth. The link to the article is http://dx.doi.org/10.1080/14639947.2015.1021567 or you can email me and I will send you a copy of the article.

7 Batchelor, Stephen. 1994. The Awakening of the West: The Encounter of Buddhism and Western Culture. Berkeley, CA: Parallax Press.