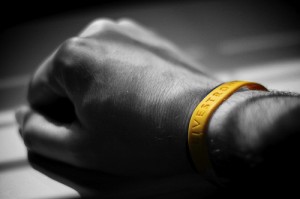 Five years ago, the results came in: at age 43, I had colon cancer.

Let’s explain a bit what that means, because colon cancer runs in my family like The Force through Skywalkers (so far, only one person has laughed at that. It is intended to be funny, so please, laugh if so inclined). My grandfather Sandor was a loving family man, professional actor of the Hungarian Theater in New York in the 30’s, along with my dear grandmother. His family name was Blitzer, but that was a bit too Jewish for that time in Hungary so he changed it to Bodroghy. He was apparently a charming man, and had his own radio show called “Sandor and His Violin”. My father Jack Meissner knew of that show and my grandfather before he even met my mother.

Grandfather Sandor as I must call him, because we had no intimate name for him like Grandpa or Papa, died of colon cancer at age 39, right at the time my mom and dad got married.

Fast forward to his grandchildren, four boys in this particular line. Three of four of us had ulcerative colitis from childhood, two in the hospital at the same time, one not too far from death. We all survived our youth, with constant discomfort, pain, and sometimes embarrassment. But we survived, at least until 2002, when my oldest brother John was diagnosed with colon cancer.

John, you must understand, was the kindest of us. He had, shall we say, an interesting late teen and early 20’s. But throughout, John was friendly, kind, and generous to a fault. And part of that kindness was understanding how we would likely react with upset at this news, so John decided not to tell us until after his first surgery, where he lost two organs to the cancer.

He called after getting home from the hospital to tell me. It was the last time we spoke; John died within a couple of weeks at age 51 before getting his second surgery.

This is the backdrop of my own diagnosis. In fact, it was due to John’s death that I finally scheduled the colonoscopy I’d so skillfully avoided for the past decade. There weren’t any particular symptoms beyond what I’d spent about thirty years with already, and I was a decade younger than John.

… but still older than my grandfather.

People ask if I became religious after finding out I had cancer, and of course the answer is no on several counts. First, I’m not the least bit religious, I’m an atheist and my meditation practice is utterly secular in nature. Second, I already had a regular meditative practice, and had for a long time. Meditation preceeded any truly significant need for it to deal with the vagaries of life.

The diagnosis, odd as this may seem, could not have come at a better time. It was 2007, I’d been a meditator for perhaps fifteen years at that point, and a comprehensive and sometimes quite aggressive practice was already part of saving my life from a critical depression a couple of years before. The colonoscopy was scheduled just before going to a retreat at Bhavana Society in West Virginia — being secular does not mean we don’t value and learn from tradition — and the retreat was the usual nine day formal silent retreat at the forest monastery. My habit is to arrive a day early and stay a day late, to spend some time with my dear teacher monks and get settled in.

The retreat itself went well. My intention was to continue the practice of jhana, and interestingly enough the most deep meditative state occurred on the last day in the very last half hour. Yet another reason not to blow off the last sitting! And the next day, sharing a cab ride back to the airport with a nice Japanese woman I’d also carpooled with on the way to Bhavana.

If you’ve never been to a formal silent meditation retreat, I’ll just say that using your cell phone is not only not helpful to what the whole point of the retreat is, but you won’t often get a signal. So the first time I’d turned on my phone was on the way to the airport at a gas station, waiting for a replacement taxi as ours had broken down. Low and behold, the voice mail messages just kept piling up! There were a total of nine, perhaps not all that many by today’s standards, but I’m not much of a phonophile. And they were, to varying degrees, quite emphatic in their content. My doctor, the Hubert H. Humphrey Cancer Center, places like that all telling me I had colon cancer and had to schedule surgery right away.

My response was perhaps a bit unexpected in light of family history, but right in keeping with having had a solid meditation practice and just coming out of a good retreat: I closed the phone, and said to my companion, “That looks like a nice park over there. Shall we take a walk while we wait?”

Please understand that this was not avoidance, nor was it replacing a dreadful feeling with a nice one. It was simply the joy of being in this present moment, which gives a tremendous strength to deal with what might otherwise be the most terrifiying news. And looking back over the years since, there has not been any manifestation of the Kübler-Ross Grief Cycle, though I fully expected to not survive this long.

And that brings us to the present moment again. Today is Easter, a time of renewal. I have, against historical odds for my family, survived colon cancer (so far). But a question has come up lately, and that is What Have I Been Doing Since? Every year past 39 has been icing on the cake. Every day past age 43, sugary flowers on the icing. At some point, the little bit of me that was not removed by scalpel will become cancerous, and though I’ve been fortunate to have benefitted from medical science once, there is always the chance that it won’t be enough when that time comes.

There are changes coming that, I hope, will benefit others more than how I’ve spent the past five years (let alone the totality of my life). One of the things I heard that has stuck with me from the Wisdom 2.0 Conference is the idea of living a life of fulfillment, instead of enrichment. My last fortune cookie said something like, “The ending of one thing is the beginning of something new.”

And you all know how much I like fortune telling 🙂