“Then the man might think: ‘I love this woman with my mind bound to her by intense desire and passion; thus sorrow, lamentation, pain, grief, and despair arise in me when I see her standing with another man… What if I were to abandon my desire and lust for that woman?’ What do you think? Would sorrow… and despair arise in that man when he sees that woman standing with another man…?”

“No, venerable sir… Because that man no longer loves that woman; that is why sorrow… and despair do not arise in him when he sees that woman standing with another man…” 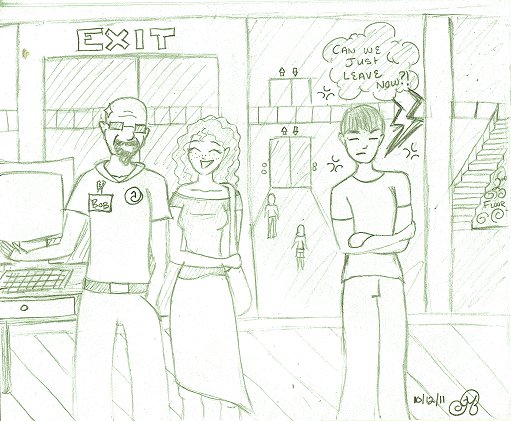 Maybe it’s because the words that have been passed down to us as being the Buddha’s come from such a different place and time — a culture that evolved into one very different from our own, two and a half millennia ago — passed on to us through a variety of languages and dialects, and changes in the meanings of the words; but for whatever reason, the sermons and stories are not crystal clear to those of us who read them in these times.

In many of the suttas (as the separate stories are called) there is a simple and obvious way to read the story and its moral, and, at times, that may be what’s actually being said — black and white, wrong and right, no subtlety intended — but at other times it is not. At those other times, an accurate reading takes a little more effort to discover a far more complex message.

How do we know when a deeper meaning is intended, and when we should take the words at face value? The answer I have come up with to that question — the one that works for me (your mileage may vary) — is that the Buddha tells us we can see his dharma for ourselves, right here, right now, in this very life. When I go to put the dharma into practice in my life, I have discovered that, fairly consistently, my moral compass aligns with what is being said.

An example of this can be found in the snippet on love quoted at the top of this post. This comes from a larger sutta in which the Buddha is describing to his monks (bhikkhus) how he has, in the past, shown a rival sect (Jains) that they are deluded when they think they can use up old karma with ascetic practices — and generate no more karma by doing no further actions at all (by holding completely still) and by this method, end all suffering. The simile of the man in love falls in the middle of this sutta, and at first glance the words can be interpreted as saying, “Don’t love and you won’t get hurt.” In answer to the Buddha’s question, the monks say the man will not experience sorrow “because that man no longer loves that woman” and the Buddha does not disapprove, so this is apparently the right answer.

Yet when I look at my own personal moral compass, I know that being so detached from life that I no longer love is not the right answer. There are many Buddhists who would say, however, that this is what the Buddha taught, and if I disagree, it is that I am rewriting what the Buddha said to bend it into conformity with my own beliefs, but I don’t think this is the case, and the evidence is right there in the sutta.

Just as, with the simile of the raft, to understand what’s being said, we need to look at the larger context of the sermon and message it forms a part of, here too, we need to look at the patterns of the language and relate the simile of the man in love, back to the larger point being made in the sermon. This is what’s needed to understand what is being said.

Up to this point the Buddha has spent a great deal of time explaining to his disciples how the Jains misunderstand how applied effort “exhausts suffering” and then he explains how, within his method, a certain sort of striving can be said to do this. The Jains have a one-to-one, black-and-white equivalency going, in which they set up situations in which they suffer so they can burn up past karma — pain = reduced karma — with no real correspondence between the sorts of action burning up the results of particular past actions. But what the Buddha slips under the heading of “exhausting suffering” is not really that sort of random directness of any-old action’s consequences being used up by any-old suffering you choose to inflict on yourself. However, by the end of the little piece quoted below, with careful use of language, he manages to make it sound as though his method is also as simple as action-removing-suffering:

He starts off by talking about how a certain kind of “determined striving” (in the Buddha’s case this would be the practices he outlines elsewhere, as opposed to Jain torments) the “source” of suffering fades away. He says “source of suffering” several times, but by the end he bends it back around so that it sounds more direct, by going from “such and such a source of suffering fades away” to “thus that suffering is exhausted in him”. This makes it sound, on the surface, as though Buddhist practice, done correctly, destroys (exhausts) suffering — which would include suffering previously generated. However, in the lengthy sections preceding this he has made it clear that our karmic actions in the past that were going to have a certain effect cannot be modified by anything we now do — they have to play out — so he is not actually saying “determined striving destroys suffering”. In fact, this is the point he is refuting. He is actually saying that determined striving destroys the “source of suffering”. His words, on the surface, say “practice destroys karma” — and since this reflects what the Jains are saying, he intends to make it sound that way — but he has made it very clear to those present that he’s saying something more realistic: practice changes something in us that stops the behavior that leads to suffering in the future, and changes our relationship to the suffering here and now as we look “with equanimity” at the source of the particular form our suffering takes.

When he gets to his simile of the man in love, he involves his audience for the first time, checking their understanding. They reflect right back to him the same pattern of language he used. He starts out by saying that the problem is that the man loves the woman “with his mind bound to her by intense desire and passion” — he loves her possessively, this is why if he sees her with another man he would get agitated — and only through letting go of the “desire and lust” for her (he doesn’t mention letting go of “love”) can he see her with another man and not get upset. The Buddha started by talking about the source of the suffering — the intense desire and passion — and his listeners end with an oversimplified answer — “stop loving her” — that perfectly reflects the oversimplified “striving ends suffering” just above.

If this seems like a reading that requires more convoluted thinking than should reasonably be needed to pull out the meaning, we just need to keep in mind that — though human nature apparently hasn’t changed a bit in the course of two-plus millennia — styles of speaking and pop phrasing have changed a lot. When we see the Buddha redefining the popular Jain sentiment of “determined striving destroys suffering” as something more subtle and complex, yet sounding just as simple — it isn’t a big step to imaging that “If you stop loving anyone you won’t get hurt” would also be a popular sentiment under discussion, but we find the Buddha redefining that with complexity similar to that used on Jain philosophy. This is a pattern throughout the suttas — he adopts popular concepts and phrasing, saying -“Yes, yes, just so, effort ends suffering”- to a Jain, and -“Yes, yes, just so, stop loving and you won’t feel anguish”- to a heart-sick lover, but the doctrine he has in mind when he says this is not the one the listener is thinking of at first. It requires concentration on the message, and checking it against experience to really “hear” what’s being said.

It’s not that striving destroys suffering by letting you use it up by adding pain to your life, it’s that a certain kind of striving destroys the source of suffering. It’s not ceasing to love we’re talking about, but destroying the source of the suffering, which is the intensity of the possessiveness. We can check the validity of this understanding by looking at how it would play out in our own lives. If we love someone possessively, “with intense desire and passion” then when we see them having fun with a potential competitor, jealousy arises. If we love someone selflessly, the same situation is faced with equanimity. If we don’t love someone at all, equanimity isn’t even an issue; we aren’t going to see anything happening at all in the conversation between two people we don’t care about.

This is what I find is true in my life, and well-described in the suttas, that the Buddha’s sermons always come back to this one thing: It is the way in which we define something as a part of ourselves that is the problem, defining what’s “out there” as necessary to ourselves “in here”. Take that woman away, and the jealous man feels he has lost a part of himself. The solution isn’t to stop loving, but to learn to love in a way that is not possessive, that allows the loved-one to come and go in a way that doesn’t make that suffering born of intense desire and passion — the source of the suffering — arise. Love with an open heart and open arms.