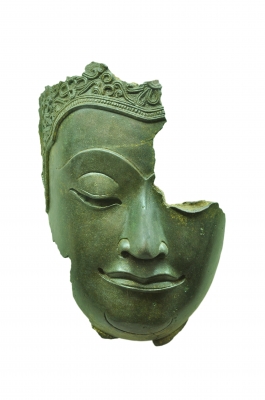 Dhammacakkappavattana Sutta — Setting the Wheel of Dhamma in Motion – Samyutta Nikaya 56.11
The End of the Buddha’s First Sermon

The Buddha’s First Sermon is a very important event in human history indeed – but fortunately it cannot be said to have been overlooked. In it the Buddha expounds the Middle Way and the Four Ennobling Truths (including the Eight-Step Ennobling Path).

However, it ends unexpectedly in several stages:

2) There was general rejoicing:
“the system of ten thousand worlds trembled and quaked and shook.
A boundless, sublime radiance surpassing the power of devas appeared on earth.”

That is how Hollywood or Bollywood would like the First Sermon to end: with a big production number giving ample scope for imaginative singing and dancing. But that is not how the First Sermon ends. Because after that:

The Buddha responds with dignified silence to the justified hullabaloo of rejoicing at his exposition of the Dhamma. But then he goes out of his way to commend – not once but twice – the achievement of real wisdom by a single real being. OK, the idea that Wisdom is even better than Cheering may not strike us as all that shocking nowadays. But never in human history has it been instantiated so vividly and poignantly as by the ending of the Buddha’s First Sermon.

In the light of this powerful example, it is not surprising that, even today, Theravada Buddhists all over the world praise the Dhamma by saying that it is “to be comprehended by the wise, each for himself.”

II
Upāli Sutta – Majjhima Nikāya 56
What About the Others ?

The English translation by Bhikkus Ñanamoli and Bodhi of The Middle-Length Discourses of the Buddha has been praised justly. It includes summaries of the suttas it contains. Sutta 56 is summarised as follows:

‘The wealthy and influential householder Upāli, a prominent supporter of the Jains, proposes to go to the Buddha and refute his doctrine. Instead, he finds himself (after considerable debate) converted by the Buddha’s “converting magic” : “I go to the Blessed One for refuge and to the Dhamma and to the Sangha of bhikkhus.”’

Then what? Then the Buddha says something mind-boggling:

“Householder, your family has long supported the Niganthas [the Jains – RI] and you should consider that alms should be given to them when they come.”

Oh Wow! Surely this is the time to put the boot in: “If you ever so much as speak to a Jain again, you’ll have me to answer to!” But that is not the Buddha’s way. And Upāli, clearly a man of discernment, is gladdened:

Yes, very multicultural. And I would rub it in even more were it not for my suspicion that the India of 2,400 or 2,500 years ago was even more hospitable to divergence of views than we are now.

The Buddha’s First Sermon ends admirably ; I am glad it was not truncated. But I rather wish the Upāli Sutta had ended here. However, it goes on — and the rest of the Sutta gets less cuddly. Having informed his doorkeeper that “From today on I close my doors to the Niganthas and the Niganthis [male and female Jains –RI],” Upāli advises the doorkeeper to say to any Jain who turns up, “Venerable sir, if you need alms, wait here ; they will bring it to you here.” Not the warmest of welcomes – but far from outright rejection. And as if that were not enough, since the Nigantha Nātaputta [Mahavira, the founder of today’s Jains — RI], “was unable to bear this honour done to the Blessed One, hot blood then and there gushed from his mouth.” Point taken ! But these are, after all, the Buddhist scriptures we are quoting from – not the Jain ones.

Today, of course, we would expect that the Buddha and Mahavira would embrace and agree that in essence their beliefs were the same. But I suspect that both the Buddha and Mahavira would have considered that demeaning. They knew they differed and asked only that their views should be heard, so that people could make up their minds for themselves. And that they and their disciples should not be killed for their beliefs.

That basic understanding of Difference without Destruction has remained part of Buddhism. Thus, the Edicts of the Emperor Ashoka (304 BCE – 232 BCE), the model Buddhist Monarch of Righteousness, specify that “All religions should reside everywhere, for all of them desire self-control and purity of heart.” [Rock Edict Nb7 (S. Dhammika)] and that “Contact [between religions] is good. One should listen to and respect the doctrines professed by others. Beloved-of-the-Gods, King Piyadasi [aka Ashoka –RI], desires that all should be well-learned in the good doctrines of other religions.” [Rock Edict Nb12 (S. Dhammika)]

But the original expression of this clear-eyed tolerance in the Upāli Sutta, unsparingly facing the conflict between real difference and real co-existence, remains our starting-point.