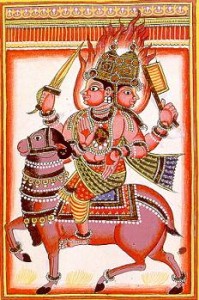 You wouldn’t know from the title of the sutta — “The Greater Discourse on the Destruction of Craving” — that this is one of the suttas that gives the most detail on dependent arising (aka dependent origination, interdependent co-arising, etc) but it is one in which the Buddha attempts to put across the concept that was the backbone of all his teachings. He describes it backwards (which is normal) and forwards (used almost as frequently). He covers arising, and he covers cessation (backwards and forwards). And then he describes it in terms of fire, in terms of nutriment, and in terms of one person’s life, as well as pointing out what we should and shouldn’t care about if we properly understand it (we would not, for example, have any reason to be wondering who we were in the past or who we will be in the future).(1)

The thing he avoids saying is what “it” is that arises and ceases. Certainly on one level “it” is fire, but we can infer from the title of the sutta that “it” is craving. We might also be justified in saying that “it” is consciousness, since the sutta is framed as an antidote to wrong views of consciousness espoused by one “Sati, the fisherman’s son” and consciousness is herein described as arising from craving. But if we remember that dependent arising is a chain of events, one thing arising from the next, it can equally be said that the “it” which arises — and ceases if we understand how to break the chain — is whatever follows from craving, which would include all forms of dukkha (the experiences we get when we don’t understand the chain and therefore fail to break it).

In my previous post I talked about the reason why “nutriment” was a difficult concept for us to understand — because we Westerners aren’t as close to the starvation years as the just-becoming agricultural society the Buddha grew up in, so we don’t have the same relationship to food as sustaining something that is extremely precarious — life in a delicate balance, life that can only continue as long as it is still getting “nutriment”. In the comments below that post, I asked Dana for a pointer to the sutta in which she had encountered nutriment, and it was this one, MN 38.

Just before nutriment is introduced, the Buddha is talking to his monks about how different kinds of fuel result in different sorts of fire. Any of us who have seen a wood fire blazing and, in some other moment, watched a candle burning, know that there is an evident difference:

After discussing the way consciousness arises similarly, in dependence on its particular fuel, the Buddha then asks:

In Bhikkhus Nanamoli’s and Bodhi’s notes on this part of the sutta(2) it is explained that the “this” is referring to the five aggregates. Richard Gombrich, in “What the Buddha Thought“(3) has a different take. After a good look at the Pali, he proposes that the Buddha is actually pointing to “this” when he is speaking — he is pointing to and still describing the fire. (Pali texts don’t come with stage directions — so there is no “He said, while pointing at the fire…”)

The Buddha is still comparing fire to consciousness, and pointing out that what kind of consciousness arises depends on the fuel it is burning — its nutriment.(4)

In the next section, the Buddha discusses nutriment from a different angle. He says:

“Monks, there are these four nutriments for the maintenance of beings who have come into being or for the support of those in search of a place to be born(5). Which four? Physical food, gross or refined; contact as the second, intellectual intention the third, and consciousness the fourth.

So we have four nutriments:

and all of them have craving as their source.

The way to understand this bit on nutriment parallels what was just said about fire. On the obvious (gross) level, the Buddha is describing something that “everybody knows”. With fire, he is describing how people keep the fires burning (using fuel) and this is a desirable thing in a society in which pretty much everyone — not just the brahmin priests — kept fires in their homes. But the metaphor of the fire is used to point out something on a subtler (fine) level, something less desirable — the thing we are trying to put an end to — the consciousness that is described in dependent arising.

As for craving, and how it can be the source of all four foods — on both levels — this goes back to the Prajapati myth mentioned in my last post. Prajapati comes into being through (a certain kind of) craving, and he is always hungry, always seeking to come into contact with knowledge of himself, that will simultaneously feed him and bring him into existence. So on a gross level, it is this craving for existence that brings us (as it brought Prajapati) into existence: we crave food, we crave contact, we crave the ability to make choices, we crave knowledge through our consciousness. On the fine (undesirable) level that the Buddha is discussing, we also crave the things that bring our not-self into existence: the different sort of food we feed our sense of self, which includes contact with that which supports our view of who we are (think of us as seeking out things that confirm our biases), our intellectual intentions are driven by that craving, and the sort of consciousness that causes trouble is the particular one that arises while it is seeking out — it craves — confirmation that our views are right.

Another way to look at the gross level of nutriment is to see it as “the field” in which the fine level of things grows. The Buddha uses the metaphor of fields and seeds, soil and water in this way in several suttas. Without the body that needs gross food, the sense of self (“the being”) that feeds on the subtle food of our conceptions would not come into being. That body is “the field” in which “the being” grows. Without contact with the world in general, contact that sought out confirmation of our sense-of-self would not be possible. Without having the ability to make choices, the choices driven by our sense-of-self could not happen. Without consciousness, we could not have the consciousness that seeks itself.

In a great many of the Buddha’s sermons (and those of his cleverest disciples like Sariputta and Dhammadina) it is the obvious, the “gross” that is being named and defined, but what is being addressed is much harder to see. Why did he not just come out and say what he meant? Who knows what all the factors might be! Perhaps he didn’t have the words; perhaps that is just the way people talked — it was a very different time from ours. It is certain that the Vedic religion of the time was built on correspondences between what was seen here on earth and “higher” conceptions of what was going on in “that other world” — the degree to which people in the day conceived of everything they saw as having a different and more significant hidden meaning is just about unimaginable to us now. That alone might be explanation enough.

(1) He also suggests that if we do not have direct and first-hand experience with what he is pointing out, we should not be talking about it — we shouldn’t even be repeating what the Buddha says about it if we don’t really understand it through direct (and not just intellectual) experience. This is my favorite part of the whole sutta because to me it says, -“If you think I am talking about rebirth in a future life in this lesson, and you have no direct experience with rebirth, you should just shut up please.”- Given that the sutta starts with Sati doing just that very thing — talking about rebirth though he is clueless — it seems an obvious conclusion that this was part of the Buddha’s point in giving this lesson.

(2) Note 405 on p. 1232 of the Wisdom Publications Middle Length Discourses of the Buddha.

(4) The Buddha then does a little riff making sure the monks understand how important it is to recognize how the “this” he is pointing to comes into being dependent on “that” — a phrasing often used elsewhere with no reference to fire, but instead pointing to dependent origination. At the end of this discussion of fire and its fuel he also points out that this part of the teaching is something they should not cling to — which can be seen as another way of saying, -“I am pointing this out as a metaphor. I am not teaching a fire doctrine. This description is just a raft to get you to the other shore of understanding. Once you get to that shore, you really don’t need to concern yourself with fire and its fuel anymore.”- (I enjoy imagining the monks sitting around picking apart the metaphor and trying to stretch it to fit *perfectly* — as so many of us modern folks do while overextending metaphors — and having it fall apart on them, and the ensuing arguments. I would not be surprised if that was part of the Buddha’s point about “the raft”.)

āhārā – food, nutriment
bhūtānaṃ – become, existed
vā – or
sattānaṃ – a living being
ṭhitiyā – one who stays
sambhavesīnaṃ – “one who is seeking rebirth” is the usual translation, but “bhave” is “becoming” not “birth”.
anuggahāya – favor, help, assistance

The two Pali words for “being” – “bhūtā” and “sattā” are used interchangeably throughout the suttas, and “bhūtā” — which shares a root with “bhava” (“becoming”) — certainly captures the precarious and changeable nature of “who we are”. This can be interpreted as meaning “a living creature” from birth to death — “a life” — so that “one who is seeking “bhave” (becoming) would be the equivalent of someone wanting to be reborn — and this is the way traditional Buddhist translators tend to see it — or it can be interpreted as something less concrete, as saying that nutriment is needed for the continued support of “who we think we are” sort of “being” (as in “I am being an ass right now — can I have another beer?”) or to bring into being the sort of person we want to be (“I think I want to be wealthy — who can I step on to get there?”). It’s my contention that the Buddha is talking about a being as the more transient, rather than the concrete “life” — so he is not addressing a birth and a whole life sort of being — which is our modern conception of a being (as lasting) instead of the ancient conception of a being (as fragile and changeable).