Time on the cushion, being mindful of mind, is interesting and revealing. You’ll find yourself playing hide and seek with thoughts. You’ll notice thought patterns, habits of the mind, and you may even get to experience quiet times when few thoughts arise. Mindfulness of mind is often a practice of letting go, letting go of each thought as it arises, as it sweeps you away, and as it returns. Eventually, you become mindful of thoughts at work in your daily life.

Last year, I had discovered some beliefs I had that were counter-productive to my current aims. Through mindfulness of mind, I realized that I was carrying around beliefs I had developed as a child about math, which was conflicting with my current interest in physics. I decided I would intentionally over-ride those old beliefs with new formed experiences, and from those I could develop new attitudes around mathematics. I wrote about this topic in Beliefs and Mindfulness of Math, if you are interested. 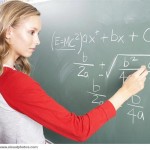 I’ve been successful in changing my former aversion to math to one of utter fascination, and in the process have fine-tuned my mindfulness skills during times when my mind is most engaged and busy. This may sound counter-intuitive, or downright impossible. If you have been practicing mindfulness on the cushion and bringing it to daily life, you’ve likely noticed that we really aren’t good at multitasking. Certainly, when we start out learning how to be mindful, it takes a lot of concerted effort just to be mindful, or to just focus on a task.

But I discovered something helpful while on a jhana retreat with my teacher Shaila Catherine. It had taken me three days of sitting meditation for two-hour stints, three times a day, six hours of walking meditation, and nine meals of eating meditation to enter into the first and second jhanas. This was the first time I experienced a truly quiet mind, without thoughts, almost without body sensation (I was aware of a few spots), and a feeling of contentment and peace. From time to time, I’d hear my voice, off in the distance somewhere, say Let it go. Just let it go. At the time, I didn’t give it any thought, and I didn’t know what I’d been letting go of. It was simply something that arose and faded away.

In discussion with my teacher the next morning, I realized that mindfulness had been hovering in the background of my peaceful meditation, like autopilot. From then on, I found mindfulness could operate in the background while I went through my daily life, even during busy mental calculations, such as doing math. Mindfulness has become habit for me.

While it’s been useful to practice mindfulness of mind while on the cushion, and I still do this, mindfulness while busy has proved to be exponentially more enlightening.

In order to change my previous beliefs that math was hard, impossible for me, and downright scary, I’ve had to set my intention as I learn it. My first intent was to be patient and gentle with myself, to allow for a lot of mistakes, and to give myself however long it takes to learn each step.  I also resolved to let go of any fears or old admonishments that arose.

As I’ve worked problems, I inevitably make errors. It takes but a split-second for the reprimands from teachers of the past to haunt my mind. Mindfulness of body points to the tension forming. I realize the reaction is to the past, not the present. I take a deep breath, and try again, with patience, with renewed curiosity to see where I went wrong in the problem, and with all the time in the world.

I’ve discovered through repeated errors and reworking problems that I am understanding mathematics at a much deeper level than I expected. I’m seeing patterns, and understanding numbers. I’m finding that correcting what I’ve done is a fun challenge, and in the end, learning math has become a confidence builder. Mindfulness ticks away in the background, watching, ever-ready to jump in when an old thought patterns threatens my new resolve.

Time  on the cushion is great laboratory time to practice mindfulness of mind, to learn to get acquainted with thought patterns, the impermanence of thoughts, the repetition, and the emptiness of each of thought. But learning to be mindful while engaging in daily life is where the practice gains momentum and really shows its benefits, putting the pedal to the metal, so to speak, especially when you can be mindful of the mind when it’s focused on thinking and problem solving.

Mindfulness has become a friend I can count on!