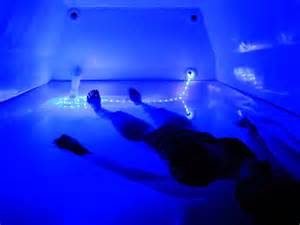 Last Saturday, I had my first experience in a float tank, sometimes also referred to as a sensory deprivation chamber. I had been curious about them since I first learned about them in the 1970s, especially after seeing the 1980 William Hurt movie, Altered States. Recently, a couple of commercial float ventures have opened in the Madison, Wisconsin area (as I’ve told you, we have everything) and I used a Groupon to give it a go.

I went thinking that it might be a good place to practice yoga nidra, a kind of body scan practice that creates a deep sense of relaxation and tends to diminish my sense of physical boundaries. A completely dark, silent, weightless environment seemed like the perfect place for that kind of practice.

When I arrived, I was led to a small room that was like a large bathtub with walls rising from the edges of the tub all the way to the ceiling. In the tub were about 10 inches of water, heated to skin temperature, with a thousand pounds of Epsom salt dissolved in it. A soft blue light filled the chamber, and the ceiling had little lights that looked like stars. Soft, New-Agey music was playing in the background. I disrobed, showered, put in a pair of earplugs, got in and laid down.

My body floated like a cork, and I concentrated on finding a relaxing way to lay down on the superbuoyant water. When I could relax, I turned off the lights, and settled back into total darkness. In a few minutes, the music faded out. Weightless, in the warmth of the air and water, the only thing I could hear and feel was my own breath.

I tried to do the yoga nidra practice, but I ran into a problem. It was extremely difficult to locate sensations in my body. But I soon abandoned the project, because I found that I could get to the desired state easily without it. The warmth and weightlessness already made the outlines of my body much less perceptible. I focused on my breath, which was also extremely easy because the sound and sensation of breathing was all I could perceive. Soon, I had the palpable sensation of my conscious awareness extending around my body like a large, thick sheath. The edges of this sheath mostly seemed to extend about two or three feet beyond the edges of my body, but sometimes it expanded greatly and seemed to fill most of the chamber. I had before experienced my proprioception expand like this in sitting meditation, but never so far and never so effortlessly. The longer I floated, the more the sense that my consciousness was not bounded by my body became my default perception.

It occurred to me to try metta meditation. Once I had established the sensations of loving kindness in my heart area, because of the absence of other sensations they seemed particularly intense and localized. Like the breath meditation, it was extremely easy to keep my awareness focused on the metta sensations, because there were no distractions and they were so much more powerful than anything else I could feel.

After a while, my thoughts had become very few and far between, and I just surrendered to the sensation of being a big, floating, oblong ball of conscious awareness. It hardly seemed like an hour had passed when the music again began playing, and the little star lights in the ceiling began faintly glowing. Then the blue light came on suddenly, all the more jarring for the complete darkness I had just been in.

I can see how floating would not be for everyone. Some people panic, hallucinate, become bored, or are simply annoyed by having such intimate contact with the chattering in their own heads. One must be careful to keep the super-salty water out of one’s eyes, and shower carefully to keep it from drying in one’s hair and ears. And it’s not free, although at $40 an hour it’s cheaper than a good massage.

But I found it a wonderful meditative experience. It certainly impressed on me the extent to which our proprioception depends on being the focal point of our sight, sound and touch. Without those familiar anchoring points, it is much easier to perceive awareness itself as an open space with porous boundaries, rather than the homunculus riding around in our heads, Power Rangers style, that we usually take it to be. I can’t wait to float again.