One of the many little things I have discovered while studying the Pali texts over the last several years is that the people of the Buddha’s time were obsessed with food. You may laugh, if you like, but this is actually important. 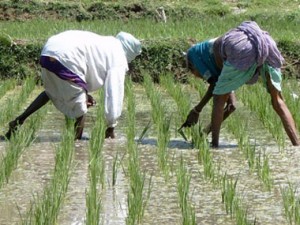 I hear all the time that, in interpreting these texts, we need to be careful not to bring our modern assumptions into our translations and understanding of them, and while that sounds very good — it sounds as good as the phrase “Know yourself” did to me when I was a teen (it seemed like the Prime Directive then) — it is ridiculously difficult to do if we don’t know how. As a teen, I didn’t know how to “know myself” (I wish I’d known about Buddhism back then), and as a student of the Pali suttas, I can’t do a very good job of understanding what’s being said without knowing where the differences are between their cultural assumptions and ours.

This is where the attitude towards food comes in: back then, the bare bones of the need to survive were still at the front of their thoughts. The Buddha lived in a time when a nomadic group had been settling the area for long enough to have old villages grow into “cities” (of about 100,000 people, tops), with younger villages carving places out of the jungles. Both fire and food — keys to survival — still figured prominently in how they viewed the world.

I’ll get to just how in a moment, but first a small aside: The obsession with food and fire should not make us think these people were primitives. The complexity of their thought processes is evident in the way it was the norm — at least in philosophical discussions — to layer meaning on meaning. This comes, in part, from having a worldview in which the ties between macrocosm and microcosm were seen as obscure and critical — the religious practices centered around knowing the secrets of what things down here related to the hidden workings of the cosmos, and being able to manipulate them — and since names (words) were at the center of these correspondences, language very often had dual meanings, and often enough, multiple levels of references, all in a way that is just about incomprehensible to us now.

It is a large part of what makes the Pali texts, as well as the ancient Vedic texts, so hard to decipher.

One of the things I have had the most trouble understanding in these texts, is when the Buddha or one of his disciples talks about “nutriment” (“āharā” in Pali) — what it means and how to approach it, I’ll leave the word and examples for another post, but here I just want to focus on what a stunning difference there is between our attitude towards life and food, and theirs, and suggest a way of looking at the texts that might improve understanding.

The difference actually has as much to do with defining life, as defining what sustains it, but the two are so bound up as to be inextricable — which is the whole point. We generally see food as a fixed commodity that provides energy to support life. Food is. Life is. The readers of this blog probably worry very little about where their next meal will come from, and while we recognize that *if* we get no food we will die, we don’t connect food to existence in a visceral way. We exist, we are confident we will continue to exist. Food exists, and we can go get some if we are hungry.

It may be that the reason for this attitude towards life and food is because of a foundational belief in how the cosmos came to be, a story about the First Man (once known as Purusa but later as Prajapti) — or maybe it’s the other way around, maybe the belief in the importance of life and food is what gave structure to Prajapati’s story. At any rate, the story is that first there was neither existence, nor non-existence, and then desire happened, and brought forth the Cosmic Man, Prajapati. This was good, but since the whole of existence was Prajapati, he was hungry for something to do / see / taste / smell / hear = know. So he split himself into a zillion pieces and that gave him the senses through which he could come to know himself — and simultaneously gave him something to know. The only problem was that he’d sort of misplaced himself in all those bits, so he went around seeking himself, and he really only was satisfied when he could find himself.

This is where the nutriment and the attitude towards life comes in. Prajapati is never fully Prajapati unless he is actively being fed by those little bits of self. He is constantly hungry for the knowledge of himself, and he only feels complete when he’s being nourished by active contact with those bits. In a sense, he only really, fully exists while being fed.

Life, for the people of the Buddha’s day, was not something that started at birth and then you were alive until you died. Life was perilous, tenuous, filled with hunger and seeking, and existence could continue only while it was being nourished. The attitude, back then, was that life was like a fire that required constant fuel to go on, and nothing existed, really, unless it was being fed. There was a continuous process, a cycle: feed me and I exist. Only when I am being fed do I exist.

We can see this attitude in the Buddha’s remarkable insight into human consciousness — the way he describes the mind as something that arises and passes away rapidly, like a monkey grabbing branches, swinging, letting go, and grabbing another (his metaphor) — but in truth the idea of life-as-process runs all throughout the Pali canon. The underlying theme is always about transition; the major points are generally focused on the cusp of change between one state and another, not on things lasting.

This is why, when, over on The Secular Buddhist page on Facebook, I responded to the question of whether the third noble truth of cessation of suffering is possible or not, I answered that I didn’t see the Buddha ever saying to his fully awakened arahants that they would reach a point where they could just relax — done! — but rather he, and they, continued with mindfulness practice. When the Buddha talks about “the aggregates” (khandha) that make up our sense-of-self, he defines them as “the aggregates of clinging” and there are times he makes clear that arahants still experience the aggregates — they just don’t cling. Stuff still arises, stuff that has the potential to cause suffering, and the very fact that it does can be interpreted as a bit o’suffering right there — but see it, let go of it — done! (for the moment). Mindfulness is the nutriment for freedom. It’s an ongoing process.

Another poster to the thread had the same answer, but it came from a different point of view — “reduce craving by what is too much for you” — which seems to me the very epitome of mindfulness. If it’s not too much for you then it’s not really clinging/craving and so you don’t need to let go of it; let go of the stuff that’s going to hurt.