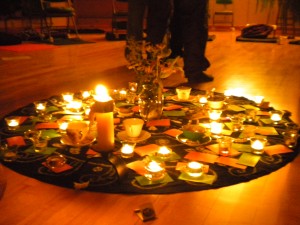 Here are links to Part One and Part Two.

One of the things I’ve admired about the Friday night drop in mindfulness sessions at the UW Health Integrative Medicine Center is the creativity displayed by the teachers in developing rituals, symbolic objects and activities that help to express the wisdom of practice. There is no woo about these rituals; no supernatural powers are being invoked. In fact they are as often light-hearted as they are solemn, and can have a playful, ad hoc quality to them, employing as they do note cards, crayons, stones, and even hardware and gym equipment. Some work better than others, for me at least; but when they work, they have a curious poignancy to them, as if one is acting out a deep truth that is at once intimate and unnamable.

This gift for creative ritual was used to great effect at key moments of the retreat I’ve been writing about, engaging the body and harnessing the imagination to bring deep, inchoate truths to the surface where they could be examined and shared.

Circle in a Circle

In the center of the big round meditation hall there was at all times a circle of blue cloth covered with tea candles, one for each of the 30 or so participants. There was also one large candle in a pewter stand, and a large bronze-colored singing bowl. When it was referred to at all, the teachers called it the “centerpiece.”

At each of the zabutons in a circle around the room when we arrived for the first evening practice session were two note cards, one orange and one green, and a pen. We were invited to sit with a question: What difficult thing had we brought with us to the retreat? What did we wish could be resolved or let go of? The idea was not to try to figure out the answer, but to let the question settle in the heart and mind, and then to listen carefully to whatever arose. After a few minutes of sitting, we were invited to write whatever words or phrases occurred to us that summoned the burden we carried.

Next, another question. What were our hopes for the retreat? Why had we come? What brought us here? Again, after a few minutes of sitting, we were invited to record our hopes on the green card. Finally, when we felt ready, we could bring our cards to the centerpiece, lay them down there, and light a tea candle to set on top of them.

As the lights in the hall were dimmed, one by one we went to the center of the room, fumbling with matches or other candles to light our own and set it in place with our cards. Soon the entire circle glowed with candles, softly illuminating the note cards that carried the struggles and longings of each one of us. The visual message was clear: here we all were together, with our vulnerabilities and our wishes for happiness, held in the container of the retreat .

The centerpiece, and our candles and cards, remained in the center of the room throughout the next three days. Sometimes, as you’ll see, it played a very explicit role in our activities, but always it was a visual reminder of what held us together, both as fellow retreatants, and as human beings.

Our very first exercise was to gather chairs in circles of about 10 people. Into each circle came a teacher, carrying china teacups and saucers we were told belonged to mothers and grandmothers of the teaching staff – information that made the china seem even more quaint and fragile.

First, the teacher poured some water from a pitcher into a teacup, filling it about half way. Our assignment was to pass the cup and saucer around the circle. It went from hand to hand, rattling slightly as we slowly and gingerly passed it around the circle. I noted how my hands had to embrace those of the person to my right as she passed me the teacup, and were embraced by the person on my left as I handed it to her.

The teacher then filled the cup again, this time so full that a little water spilled over the rim and into the saucer. Now the cup went around the circle again, this time even more slowly as we tried not to spill or drop it. I noticed how others took the handle of the cup first to steady it as they placed their hands under the saucer – it looked like a good strategy, so I copied it. Now I was virtually holding the hands of the person to my right as I eased the cup out of her grasp.

Angela, sitting two places to my left, thought outside the box. When the cup came to her, she took a big sip out of it – no one said you couldn’t – and thanks to her audacity the cup made it the rest of the way around the circle safely in no time.

Now the teacher filled two cups about half full. The assignment this time was to pass the two cups in opposite directions around the circle – with our eyes closed. I was a little surprised by my anxiety at this suggestion. How would I know where the cup was, and when and how I should take it? How would I find the hands of the person to my left? And what if I was the person in the inevitable, unenviable situation of having cups coming at me from two directions at once?

I will admit, reader, that I tried to cheat, squinting through barely opened eyes when I realized that the sound of the clinking cups alone wasn’t a good indicator of their position in the circle. But the room was dimly lit and I couldn’t see well enough to help. I was on the verge of a minor panic when I felt the arm of the person to my right gently caressing mine. Of course. It was a relief to follow her arm with my fingers until I found her hands and tenderly received the cup and saucer. I used the same method to alert the person to my left to the cup’s presence. By the time the second cup arrived, I was once again confident that I could play my part, trusting in those around me to find a way to help.

After the exercise we gathered again in our large circle to share what arose for us. My experience of anxiety shifting gradually to trust was shared by many in the group. In retrospect, that first exercise symbolized the work we would do over the next three days – emerging from a sense of bearing fears in isolation to a realization that we were surrounded by caring people. And while we were all in the same boat, groping with the emergence of unpredictable experiences, we would all help each other through them with kindness and good humor. The deeply embodied sense of bonding that arose from this experience is what elevated it from the kind of team building exercise you might experience at a corporate workshop into a ritual that both symbolized and expressed the unity of sharing our common humanity.

That bond had several days to mature by the final evening of the retreat, at which we were invited to form a Trust Walk. We lined up in two facing lines, gauntlet style. One by one, the persons at one end of the line were blindfolded and sent to walk through the lines. Those of us on the sides were to guide the walker through the lines, using a gentle and non-coercive touch. Soft, meditative music played as each of us in turn groped blindly though the lines. One of the teachers was at the end of the line to give us a hug and a reassuring, “You made it.”

Again, I realize how hokey this probably sounds. But after three days of sharing on an intensive level, the action of trusting yourself in total vulnerability to the others, and of gently guiding a person who could not see you but was depending on your care, was overwhelmingly moving. Some of the participants clearly found it challenging to take those steps into darkness; others seemed to be doing a slow, blissful dance through the lines as they felt the guidance of the invisible hands. Everyone seemed to have full hearts. Sobs were audible, and the woman standing next to me bobbed slightly on her feet, her hands crossed over her heart, seeming barely able to contain her emotion.

As we finished our turn at the Trust Walk, each of us was invited to once again light a candle and set it on the centerpiece; the image of our candles glowing together, cradled in the circle in the middle of the darkened hall, seemed to symbolize more now than just our common bond as retreatants. Now they seemed to reach out to embrace everybody, to suggest that the light of our kindness for and trust in one another might illuminate a human condition that extended out into the boundless world beyond.

That ritual has stayed with me. I remember the vulnerability on the face of one of our teachers as she moved through the lines, and the way my hands reached to receive a hand, arm or shoulder from the person next to me, and gently passed each person on to the hands on my left waiting to receive them. Those images come to me now as I encounter family members, coworkers, and even strangers, and I think, what touch is needed from me now? And what invisible hands may come to my aid? I have nothing but words to convey this to you, reader, so you must trust me when I tell you that this does not seem to be a verbal or intellectual response. It occurs simply and spontaneously on the level of image and body memory – an embodied ethics, if you will.

It seems to me that this is the function of ritual. It communicates on the level of physical gesture, and in doing so it speaks from the place where the wisdom of embodied human experience is held. It is not simply symbolic or metaphoric; true ritual is metonymic , a gesture that arises from and expresses a larger or deeper dynamic . This is the source of its unique, seemingly preverbal power. Ritual does more than communicate truth. It is truth.