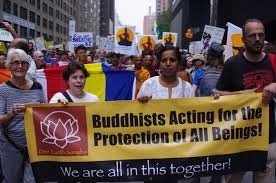 This process of questioning basic assumptions and core practices is a significant aspect of Buddhism in the West. In fact, since the 1970s, when the lineages and practices of Theravada, Mahayana, and Vajrayana Buddhism began to gain a significant following in the United States and other Western countries, these forms of Buddhism have been strengthened through cross-pollination and interchange with each other. This is one of the main reasons why Buddhism in the West is such a dynamic, vital movement; instead of dogmatism and orthodoxy, most Western Buddhists are embracing an open, inquiring approach.

In this spirit, I want to explore the interchange or connection between secular Buddhism and another trend within Buddhism which is also challenging traditional ideas, beliefs, and practices: so-called “engaged” Buddhism. Both secular Buddhism and engaged Buddhism represent perhaps the most strongly Western-inflected forms of Buddhism. Secular Buddhism, as articulated by Stephen Batchelor and others, has sought to jettison the cultural accretions and transcendent, divine entities that developed as part of the various Asian Buddhisms, while embracing the Buddha’s naturalistic analysis of and remedy for human suffering in this world. Engaged Buddhism, while also practiced in Asia, attempts to bring a distinctly Western form of concern with social justice and human rights into the heart of Buddhism.

To understand the connection between secular Buddhism and engaged Buddhism, however, it’s essential to recognize that both trends are themselves evolving and not easily defined. For example, a conference on secular Buddhism at the Barre Center for Buddhist Studies in March 2013 revealed that there are a variety of ways to define the scope, meaning, and value of secular Buddhism. (For a report on the conference, go to: http://www.bcbsdharma.org/2013-4-25-insight-journal/). Even though all self-defined secular Buddhists reject the supernatural beings and the cosmology of realms found in Asian Buddhisms, as well as the notion of karma linked to literal rebirths, there is little consensus beyond those basic points of agreement.

The Forms of Engaged Buddhism

The same is true for engaged Buddhism. Although all engaged Buddhists believe that it is vital for Buddhists to engage in the world, to bring mindfulness, wisdom, and compassion into personal relationships, the community, and the larger society in which we live, what exactly does “engagement” mean and in what form should it be expressed? Among engaged Buddhists, there is quite a range of answers to these questions.

It is helpful to think of engaged Buddhism as a continuum of ideas, beliefs, and practices. At one end, are those engaged Buddhists who believe that they can bring Buddhism into the world through interpersonal relationships which provide support, assistance, and services to those in need. Several important Buddhist projects at this end of the engaged continuum are the hospice programs of the Zen Hospice Project in San Francisco and the New York Zen Center for Contemplative Care, as well as the Prison Mindfulness Institute serving people who are incarcerated. Buddhists who offer mindfulness-based therapy, counseling, and education in hospitals, clinics, and other settings represent the most well-known means by which Buddhists engage with others. All these programs are aimed at alleviating human suffering through interpersonal relationships based on the Buddhist values of mindfulness, wisdom, and compassion

In the middle of the continuum, the scope of Buddhist engagement is explicitly enlarged to encompass a broader social realm and is directed toward achieving reforms of our economy and political system as a means of solving social problems and thus reducing human suffering. Two important examples of this form of engaged Buddhism are the One Earth Sangha and Buddhist Global Relief. The One Earth Sangha was established by leading dharma teachers from all Buddhist traditions and lineages in the West to promote an understanding of climate change and how to respond to it, based on Buddhist understandings about the causes and remedy for suffering. Buddhist Global Relief’s focus is on combating chronic hunger and malnutrition through direct aid, education programs, and raising awareness about the need for social justice. The organization’s leader is Bhikkhu Bodhi, a Theravada monk, who has strongly emphasized the need for Buddhists to address social problems.

Finally, at the other end of the continuum, some engaged Buddhists stress the need not just to ameliorate, through various social reforms, poverty, hunger, climate change and other forms of human suffering, but to challenge and transform the basic causes of human suffering: the oppressive social systems of capitalism, patriarchy, and structural racism. The Buddhist Peace Fellowship’s (BPF) project, “The System Stinks”, is one example of such a radical approach to engaged Buddhism. Another is Joanna Macy’s effort, based on Buddhist, deep ecology and general systems perspectives, to advance structural alternatives to climate change and ecological destruction.

While useful as a way to summarize distinct trends within engaged Buddhism, the above characterization does not capture the complexity and diversity of social engagement among Buddhists. First, individual Buddhists may be involved in more than one trend of engaged Buddhism; for example, someone might teach a mindfulness course in a hospital, but also be active in One Earth Sangha. In addition, there is not a neat dividing line between the trends. Bhikkhu Bodhi sees Buddhist Global Relief as responding to systemic social problems, not just providing food to the hungry.

How should secular Buddhists relate to these various forms of engaged Buddhism? The first point to make is that secular Buddhism and engaged Buddhism are not intrinsically linked, just as practicing as a Buddhist in a traditional lineage (e.g. Soto Zen) does not require one to be an engaged Buddhist. Think of the secular vs. traditional and engaged vs. non-engaged dualities as two separate aspects or dimensions of the variegated world of Buddhist beliefs and practices. (There are many other dimensions as well, for example, differences over the relationship of concentration vs. insight in meditation practices.) One’s preference or conscious choice in one dimension does not entail a particular choice in the other.

While there is no necessary connection between secular Buddhism and engaged Buddhism, engaging in the world to reduce suffering and facilitate human flourishing is essential not just to help others and solve social problems, but essential for our own internal transformation.

An individual is not an island unto himself/herself. One of the core insights of the Buddha is that we are part of a web of constantly changing causes and conditions. Human beings are not isolated, self-sufficient entities, but, like everything else that exists, are interconnected with and interdependent on all other parts of reality. Part of the causes and conditions that affect us is our social interactions with others and the social institutions within which we live. When our social interactions and social life are dominated by greed, hatred, and delusion (as they unfortunately often are), then the potential to develop more skillful ways of feeling, thinking, and acting become less likely. In short, we suffer more as individuals to the extent that social conditions are harmful. Engagement in the world to reduce suffering thus contributes to creating causes and conditions that make our own happiness more likely.

Another important reason for engagement is the positive effect that collective action for good causes may contribute to the kind of individual transformation we seek as Buddhist practitioners. (I emphasize “may”; there are many examples of collective action that work in the opposite direction.) When we work together with others to remedy social problems, the process of doing so can help to make us more tolerant, compassionate, and wise. As someone who has been an activist in the labor movement for 40 years, I have seen firsthand how individuals can be significantly changed in the course of collective action, moving to a broader view of the world and stronger connections with those of different backgrounds. Accounts of the civil rights movement in the south during the 1960s point to a similar impact on activists engaged in that difficult struggle against racism.

In asserting the importance of social engagement, I am not in any way devaluing the importance of meditation and other spiritual practices in developing the qualities of mind that reduce human suffering. For Buddhists – secular or non-secular – meditation remains vitally important as a mode of individual transformation. The cultivation of non-attachment and loving kindness in meditation can also help Buddhists be more effective and sustain a long-term commitment to various forms of social engagement. When social engagement is less fueled by rage and aggression, we can better confront the challenges which we will inevitably face in these arenas. Our ability to develop fruitful means of engaging social issues will be increased insofar as we “keep our eyes on the prize” rather than have our vision clouded by aversion and anger linked to the needs of our egos. We can experience frustration or feel badly about a setback in our project, but that does not shake our core commitment.

Thus, it is not a matter of “either-or” – meditation or engagement in the world. Instead of seeing meditation and social engagement as two separate paths – one for individual transformation and the other to solve social problems, I think it is more fruitful to view them as simultaneous and mutually supporting processes. To answer the question, then, in the title of this article, I say yes: while secular Buddhists do not have to be engaged Buddhists, I believe there are important reasons why we should be.

In my article “Secular, Radically Engaged Buddhism: At the Crossroads of Individual and Social Transformation”, I explore these issues in much more detail. In particular, I argue that a radical form of social engagement, combined with a thoroughgoing secular Buddhist perspective, provides the most solid foundation for working toward individual and social transformation. The link to this article is: http://dx.doi.org/10.1080/14639947.2015.1021567 or you can email me at mslott@hpae.org for a copy if you’d like to read more about my perspective on the issue.

For more information about the organizations and individuals noted in the article: