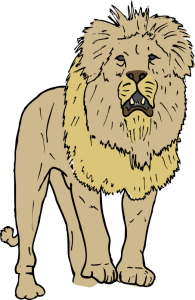 In his books on the ‘scientific Buddha’, Buddhist Studies professor Donald Lopez picks apart the notion that the Buddha was particularly friendly to modern notions of science. One central portion of his argument involves a citation from the Majjhima Nikāya version of the Mahāsīhanāda Sutta (MN 12). This is the famous “Greater Discourse on the Lion’s Roar”. Although apparently originally the Buddha had titled it “The Hair-Raising Discourse” (64), I would presume it got its name from a similarly titled sutta in the Dīgha Nikāya, as well as from its contents.

In his paper on “The Lion’s Roar in Early Buddhism“, Bhikkhu Anālayo cites Joy Manné in saying,

… lion’s roars are “utterances which the speaker is willing to defend in public”, in line with “the Vedic tradition of challenges in debate”. (p. 5).

The sutta is set near the end of the Buddha’s long life, in his eightieth year, with the Buddha responding to accounts of a defrocked monk, Sunakkhatta, who went around the town of Vesāli disparaging the Buddha as not having “any superhuman states, any distinction in knowledge and vision worthy of the noble ones.” (2).

The Buddha’s response in many ways befits the aging leader of a large and powerful social movement. He enumerates his extraordinary abilities, as well as an unshakeable confidence in four grounds of his teaching: that he is fully enlightened, that he has fully destroyed the taints (āsavas), that the obstructions he notes actually do obstruct those who engage in them, and that his dhamma leads to the complete destruction of suffering. (23-26). He says he has been willing to defend these positions in front of “many hundred assemblies” (30) of all kinds, both human and divine, without fear or concern, due to the depth of his confidence.

Central to Lopez’s points about science, however, are the Buddha’s assertions of supernatural powers and abilities. The Buddha claims the classic “iddhis” stemming from jhānic states: the ability to multiply his form, disappear, walk on water, fly through the air, hear and see things at great distances, and so on. (6-7) More extensive and doctrinally important are his claims to see past lives (17), and the law of kamma in action at all times. (11, 18, 36-41).

And then there is the classic refrain that Lopez notes, repeated five times in the sutta, which even Bhikkhu Bodhi views as extreme:

Sariputta … should anyone say of me: ‘The recluse Gotama does not have any superhuman states, any distinction in knowledge and vision worthy of the noble ones. The recluse Gotama teaches a Dhamma (merely) hammered out by reasoning, following his own line of inquiry as it occurs to him’ — unless he abandons that assertion and that state of mind and relinquishes that view, then as (surely as if he had been) carried off and put there he will wind up in hell.

This is central to the Buddha’s “Lion’s Roar” in that he claims to be able to see kammic causation in action, and therefore to see the potential futures of anyone based on their actions.

It is claims such as these that lead Lopez to dismiss the notion of a scientifically inclined Buddha as fantasy. No doubt he has a point.

But to leave it there would do an injustice to the text. The heart of Sunakkhatta’s brief against the Buddha is that:

The recluse Gotama does not have any superhuman states, any distinction in knowledge and vision worthy of the noble ones. The recluse Gotama teaches a Dhamma (merely) hammered out by reasoning, following his own line of inquiry as it occurs to him, and when he teaches the Dhamma to anyone, it leads him when he practices it to the complete destruction of suffering. (2).

It borders on the humorous that Sunakkhatta would disparage a dhamma that merely led to the complete destruction of suffering, but attention to his approach in the Pāṭika Sutta (DN 24) reveals his concerns. Sunakkhatta was particularly taken with claims of overt miracle-making and severe austerities. He was looking for a teacher who would make a show. The Buddha did not.

While both texts (MN 12 and DN 24) present the Buddha as a miracle-maker, neither one essentially refutes Sunakkhatta’s central claim: that the Buddha did not go in for show. For example, in DN 24 the Buddha claims to perform various of what he describes as “miracles”. These involve his predicting that certain holy men to whom Sunakkhatta are attracted will in fact turn out to be charlatans. And so they turn out to be.

Yet Sunakkhatta is unswayed, and decides to leave the order anyhow.

One interpretation of Sunakkhatta’s reaction is that he is too intellectually dim to appreciate that the Buddha is a miracle-worker. I think another interpretation is also possible. Leaving aside the claim that one of the charlatans, Korakkhattiya, spoke of his downfall after his death (a miraculous occurrence not obviously due to the Buddha), all the supposed miracles could simply have been due to “reasoning” and “inquiry”. Perhaps the Buddha was just a very good judge of people, and was able to spot a charlatan when he saw one. There need be nothing miraculous in that.

Indeed, if there is anything really surprising in these texts, it’s how little that is miraculous takes place. There is one example of the Buddha flying at DN 24.2.13, which is so gratuitous that translator Maurice Walshe considers it a later interpolation (n.749); there is essentially nothing else. Yes, the Buddha is said over and over again to have the ability to see past lives and future kamma. Yet (talking corpses aside) neither of these abilities would be objectively available to the Buddha’s contemporaries. They are “miracles” that can only be taken on faith or confidence.

Perhaps, as Buddhist scholar Andrew Olendzki has suggested, the iddhis were abilities more related to deep meditative states and lucid dreaming than to actual, physical ability. Perhaps they were even implicitly understood that way back in the Buddha’s time.

An Aside on Authenticity

These passages are, I think, particularly interesting because they display what is known in Biblical criticism as the “Criterion of Embarrassment“, one of the main criteria for textual authenticity. One example of the Criterion of Embarrassment in the New Testament involves Jesus’s rejection at Nazareth (Luke 4:24, John 4:44, Mark 6:4). It is hardly to be expected that the early church would fabricate a story of Jesus being mocked as a quack in his home town. (Luke 4:23). Similarly, it is unlikely that early saṇgha members would fabricate the story of a monk dissatisfied with the Buddha’s apparent inability to perform miracles, although of course once the story were in place it might have become elaborated.

Both MN 12 and DN 24 appear to have counterparts with the Chinese Āgamas, but I don’t know if either has been translated into English. That would be an interesting angle to pursue further.

The Yin and the Yang

In summary, the Buddha’s Lion’s Roar shows his two distinct but interwoven sides. On the one hand he claims superhuman abilities in the strongest terms: anyone who denies them goes to hell. The Buddha did not want to be lumped in with the “reasoners” or “inquirers”, since he felt that reasoning alone could lead one into kinds of sophistry. (MN 76.27).

On the other hand the Buddha’s miraculous claims are virtually all grounded on the ability to see past lives and future kammic developments: they are not objective miracles of show, instead they amount to claims at least partly based on human judgment and supposition.

That such purported ‘miracles’ would be less than convincing to a potential disciple is not surprising. However, that stories about such dissatisfaction would be transmitted is. In the context of ancient India it cannot have been helpful to be known as a reluctant miracle worker.

And yet that is precisely how the Buddha envisioned himself. As he said to Sunakkhatta,

[W]hether miracles are performed or not, the purpose of my teaching Dhamma is to lead whoever practices it to the total destruction of suffering. Then what purpose would the performance of miracles serve? (DN 24.1.4)

The Buddha may have emphasized his miraculous powers, but they were far from the heart of his dhamma.

One notes, perhaps, a hint of defensiveness in the Buddha’s assertion that Sunakkhatta will end up in hell: in fact I think the account we read in these texts shows the Buddha as a man who taught largely through reasoning and focused inquiry, and yet wished nevertheless to preserve something of the aura of the great teachers of his time, as well as the assertion that his dhamma was something he had experienced for himself, first hand. It was not mere theory. And the confidence, bordering on arrogance, we see in the text rings true for a man in his eightieth year, after a long and successful teaching career.

One last question is whether “the total destruction of suffering” is itself something we should take as miraculous. To do so would be to leave behind the argument between Sunakkhatta and the Buddha, however.