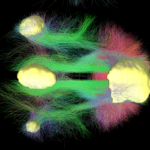 I have tended to give concentration practice short shrift. To me, devotion to intense concentration – jhana practice, long sesshins, and the like – seemed like spiritual calisthenics, meditation for its own sake, another skill to attach the ego to. Coming out of the vipassana-influenced MBSR tradition, I thought the tangible benefits of exploring the ever-changing flow of sensations, thoughts and emotions were more important than simply developing the capacity for hours of one-pointed concentration.

My thinking began to change recently when I read Michael Pollan’s How to Change Your Mind, a review of his journalistic and personal exploration of psychedelics. Pollan writes about the effect of psilocybin on the default mode network, a connection of brain structures that are responsible for functions such as self-reference, autobiographical memory, and social evaluation – functions which help define what we perceive as the self. The default mode network gets its name from the fact that it becomes active when our awareness is not focused on something like a task, when our mind starts to wander.

What do we usually “think” about when we’re daydreaming? If you observe, you’ll recognize vague fantasies about our past and future, what we want and fear, characterized by varying degrees of coherence and emotion. What Gotama referred to as grasping, aversion and ignorance – the ingredients of our false perception of the self as something tangible, persistent, and profoundly alienated.

Psychedelic substances disrupt the functioning of the default mode network, leading some researchers to speculate that this may be responsible for the experience of self-dissolution that many experience on trips. At its most profound, the experience is one of a complete loss of the self, resulting in a sense of total absorption and oneness with some ultimate source of meaning.

Meditation also quiets the default mode network, although not as extremely as psychedelics. To me, the descriptions of the dissolution of the self experienced during a trip might very well be applied to the realms of perception-and-non-perception that are attached in the Pali texts to the higher jhana stages. Perhaps those descriptions point to a neurological basis for the loss of self associated with a disruption of the default mode network as a result of one-pointed concentration meditation.

Another finding of research into the default mode network is that we tend to report feeling more dissatisfied when it is active. A wandering mind is an unhappy mind. The ability to quiet this network may be the key to the many psychological benefits associated with mindfulness meditation.

This speculation was enough to encourage me to focus on concentration meditation in my own practice, and I thought I’d share some useful techniques for one-pointed contemplation when Practice Circle meets again this Sunday evening at 6 pm Pacific, 7 Mountain, 8 Central and 9 Eastern. You’ll find a link to our free online practice community “here.