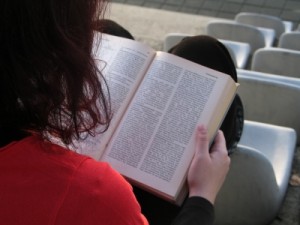 When I was doing my undergraduate and graduate work I sometimes heard snarky criticism of history of philosophy. “Why do I have to know all this?” they’d ask.

True, if we’re studying ethics or theory of mind, it’s good to know what people have said about them in the past. But since appeal to authority or tradition are not valid forms of argument, such knowledge isn’t very useful. If we want to know whether it’s ethical to clone a human, or whether the mind and brain are separate substances, sooner or later we’ll have to leave the history books behind and make an argument based on contemporary best understanding of the way things are. It may be of some interest to know that so-and-so said such-and-such about this in the past, but only insofar as so-and-so’s argument remains good (valid, sound) today. And if the argument is good, then the fact that so-and-so made it is irrelevant. We can pick out the argument and toss away the historical link as trivia.

It’s criticisms such as these that lead some to suggest (ironically, I believe) that departments should be split, so that “history of philosophy” is off on its own, much as “history of science” is not part of any science department.

Part of the problem with history of philosophy is that the work of the historian is in getting the history right, not in finding the best arguments. What did so-and-so actually say? Did he actually support the views that we think he did? Why did he say these things? What do they really mean in today’s language? These questions are quite literally irrelevant to today’s practice of philosophy. It doesn’t matter if Plato actually made this or that argument; all that matters is if this or that argument is sound, valid, convincing, relevant to the questions we are asking today. The most that the historian of philosophy could hope to do is to discover some new argument that had been overlooked in the past, that by today’s standards is sound, valid, convincing, and relevant. That’s a tall order.

Much the same problem confronts Secular Buddhism. For many, it doesn’t matter what the Buddha really said, or even if he really existed. What matters is what the particular practices are, whether or not they are effective, whether that effect is beneficial, and whether there are other practices that are more beneficial. If the point of such a practice is eudaimonic in the broad sense (leading to happiness, peace, equanimity, reduced stress, and so on), then the only question we need to answer is what the best strategies are to achieve that end.

So then why care about the Buddha?

I suggest (it is only a suggestion) that the answer to this question comes in the extent to which one identifies oneself as a secular Buddhist, rather than just a generic secularist looking for the good life. For insofar as one thinks of oneself as a Buddhist, of whatever stripe, one is at least implicitly claiming that the Buddha had something relevant to say about the good life: something relevant enough that one believes his approach deserves pride of place above, say, other theorists like Socrates, Aristotle, Marcus Aurelius, Paul Kurtz, or the most recent Journal of Happiness Studies.

Well, yes and no. As many of Ted’s podcasts attest, there is a great deal of scientific evidence for certain end points related to Buddhist practice. But there are other endpoints — such as, say, complete renunciation — that to my knowledge have not been studied, and which may be difficult or impossible to study, at least in a scientific fashion. And of course there are other claims of the Buddha that have been rejected by science, such as claims of rebirth, levitation, and psychic ability.

Perhaps a good analogy here would be with someone like Newton. Newton founded modern physics, but he also had plenty of premodern beliefs about the universe. We may call ourselves “Newtonians” in the sense that we use his scheme of calculations to get men on the Moon, but in fact his view of the universe has been superseded by Einstein and the founders of quantum mechanics. The only people liable to be interested in Newton scholarship are professional historians and folks wanting to learn about history. Those interested in the contemporary practice of physics ought to have no particular interest in it.

Similarly, if we believe that the Buddha’s message is basically just the message of contemporary science, then there really is no point in labeling ourselves as any kind of Buddhists. Science has found the stuff out, has separated the wheat from the chaff in the Buddha’s message, and there’s an end to it. This is perhaps part of the main tension in being a Secular Buddhist, and why there will always be some friction between being a secular and a religious Buddhist

However, even from a secular perspective we could perhaps say that the Buddha’s message of an ethical path tells us something science cannot, in this sense: science is purely descriptive. It cannot tell us which ways of life are better than which other ways. All it can tell us (and this is no small matter!) is that if we want to live a certain kind of life, this is the way to do it. If we want to live a life of lower stress, more happiness, or the life that gives the greatest benefit to all, then if we can come up with tractable definitions of “stress”, “happiness”, and “benefit”, scientific studies can reveal techniques that will work and others that won’t.

Science is also slow and methodical. These are complex, difficult problems, presently at the bleeding edge of advanced research. Expecting simple, clear cut answers anytime soon is liable only to lead to disappointment, as it has so many times with nutrition and healthcare, for example, other highly complex, multivariate fields. So long as we aren’t wasting our time pursuing paths that science has shown to be barren, there’s no reason not to continue in a way that seems fruitful.

There are all kinds of ethical paths, from the purely religious to the purely secular, from the most ancient to the most modern. Each of them promise to reveal something about the right way to live and act. A Secular Buddhist will say that notwithstanding certain weird claims made in the texts, the path provided by the Buddha, or at least in some portion of the tradition that stemmed from the Buddha, provides a path that fits best with our modern world. This is the message provided by people like Stephen Batchelor.

In that case, it should be of benefit to do some scholarship and try to find out what the Buddha might actually have believed and said. Now, to be clear, many who undertake such a study will find themselves more drawn to the later, Mahāyāna tradition. They may find, for instance, that the Heart Sutra, the Lotus Sutra, or later philosophical traditions are more to their taste than the Pāli Canon.

In that case, the words of the historical Buddha (insofar as we know them) will be of less interest to them. They will be interested in the history and scholarship of those later texts.

Tradition takes place in a background of change, even of revolution. The Mahāyāna dharma involved real doctrinal differences from the earlier dhamma of the Nikāyas. Part of my enjoyment in learning the scholarship has been to better understand these differences. Often nowadays secular teachers, even within one tradition or another, blend everything into one grand Buddhist tradition, speaking one day of teachings from the Pāli Canon, or even the abhidhamma, and another day of Nāgārjuna, as though they were all saying the same thing.

There are real differences in Buddhism that careful scholarship can elucidate. There are differences between the dhamma of the Nikāyas and that of the Heart or Lotus Sutras, between the Buddha and Nāgārjuna. If the only pointers towards right practice from the tradition were messages like, “just sit”, or “just repeat the nembutsu”, I would be less interested in the scholarship. However I believe that reading and studying the texts can clarify practice. They provide strategies and contexts, and explain methods in terms of their eventual goals, in a way we don’t always find even among modern, secular writers.

There is also, of course, the sheer fun of reading history.

Insofar as we see ourselves as modern practitioners of an older tradition, it behooves us to learn and know that tradition as best we can. Each of us will have our preferences, which means that each of us will likely privilege certain aspects of the tradition, and eschew others. Time, after all, is precious and we can’t know everything.

The last question has to do with the specifics of that scholarship. Does it, for example, matter whether or not the Buddha really existed, or whether we know anything of what he believed and taught? I think it does, but not very much. What matters most of all is the content in the texts, its quality and consistency. Most scholars believe this provides evidence of a real, historical Buddha, but to be fair not all do, and anyhow it need not be so in order for us to be able to learn from it.

In the background lies the additional question as to how one evaluates the quality of scholarship. This is a particularly big stumbling block for lay followers, since there is so much material out there and it’s often difficult to separate wheat from chaff. For a good rundown, it’s best to look to professionals working in the field, like Justin Whitaker. Justin has an excellent list of Buddhist Studies books on his website. (Supplemented by a list from the eminent Buddhist scholar Jay Garfield).

In particular, books by Paul Williams, Richard Gombrich, Rupert Gethin, and Bhikkhu Anālayo are in the first rank. I would add to those the various translations of the Canon out of Wisdom Publications by Bhikkhu Bodhi. His translations are the gold standard in the field; one encounters them all the time in Buddhist Studies, and each of the volumes includes an extensive introduction. (Many of them are also on the SBA’s own recommended book list).

Engaging in careful study, one will encounter material that is not always in tune with secular belief or practice. That’s how it should be, since we’re trying to understand thought that for all its novelty and lucidity has more in common with Presocratic or Brahminic philosophy than contemporary science. Any smart, secular reader should be able to bracket the weirder bits, particularly with help from websites like this, so I don’t see it as a problem.

I admit to having some sympathy for the snarky claim regarding history of philosophy, particularly as it impacts Secular Buddhist practice. That is, at the most basic level, scholarship about historical claims and arguments is beside the point. The point is to realize the existence of dukkha, and work to eliminate craving and attain lasting happiness.

But for some of us that scholarship, along with being interesting in its own right, may at times help us along the path by illuminating options we hadn’t known were available, or by clarifying those we didn’t quite understand. As such it can and should be a worthy adjunct to Secular Buddhist practice.